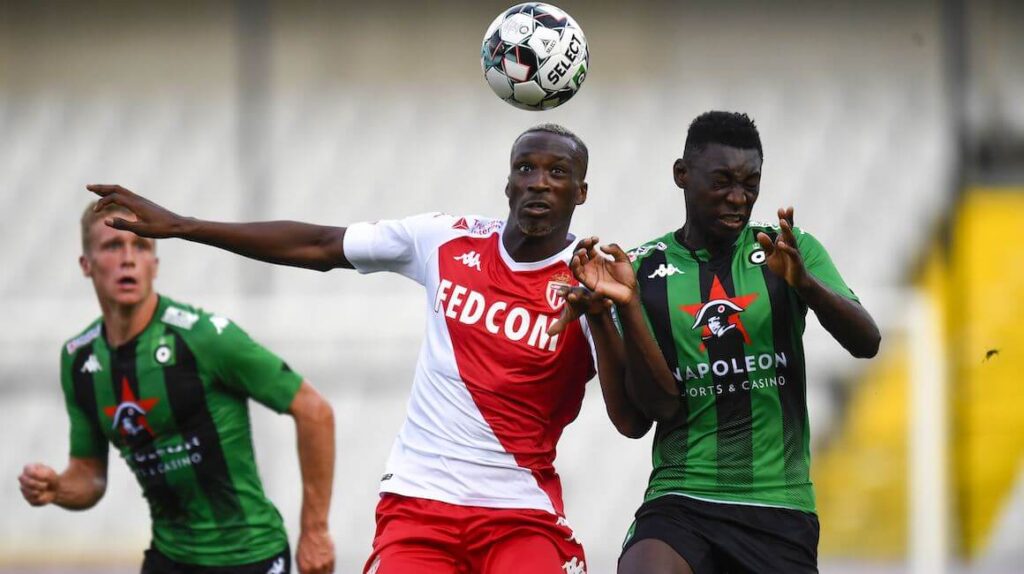 Granted a second consecutive start by Niko Kovac against Montpellier after performing well against Brest prior to the international break, Chrislain Matsima put in another assured display in the heart of defence.

For Matsima, who joined Monaco’s youth setup at the age of 15, this was the latest step in his rapid progression. Having risen through the ranks with Monaco and impressed every step of the way at youth international level with France, he’s handled the step up in class admirably to Ligue 1.

Not overawed by playing against Montpellier’s two seasoned centre forwards in Gaetan Laborde and Andy Delort, he acquitted himself manfully against the fearsome duo. While he didn’t win all of his duels against the robust, battle hardened strikeforce, Matsima still won more than his fair share, as he relished these confrontations.

In aerial duels, the languid, 190cm stopper performed nicely, for he read the ball’s flight smoothly and timed his leaps to win a large chunk of his headers. With Montpellier targeting their hitmen from goal kicks, Matsima was thrust into action on many occasions. Moreover, how he dealt with set pieces and crosses into the box was impressive. Setting himself, getting his body in line and aware of nearby adversaries, this allowed him to clear the danger.

The athletic defender’s alertness to threats saw him track runners in behind, get across to support colleagues and pick up runners into the box. Quick to react when his man embarked on runs into depth, this, in combination with his solid pace, allowed him to nullify danger efficiently. The way he scanned his surroundings helped him in the afore, meaning he could recalibrate his positioning to adjust to his opponents’ movement.

Moreover, when his opponent dropped deep with their back to goal and was about to receive a vertical or diagonal pass to feet, this was his cue to press aggressively. In doing so, he gave his foe no time or space to turn him or control cleanly, which increased his chances of forcing a turnover.

When in the process of applying his interventions, it was positive to see how incisively he timed his challenges to win back possession. Aided by his long legs, which means he can stretch out to nip in, plus his judgement, Matsima hardly put a foot wrong.

Meanwhile, in terms of his positioning, there was a lot to like, for he shifted across, dropped back, pushed out and held the line cohesively with his defensive comrades. Other details he got spot on came from how he picked up marking details that ventured into his designated area of operation and how he dropped back if a teammate pressed out in order to cover the vacated space.

By passing the ball out from the back with assuredness and clarity, this added to his quality output. Moving the ball slicky either to his fullbacks or midfielders, he looked to get the ball into his team’s more dangerous outlets. Although he eye catchingly broke the lines and switched the play on occasion, his role was chiefly to recirculate possession with intent and find Monaco’s more imaginative and direct ball users.

When the opportunity presented itself to carry the ball upfield, he duly took it. Upon noticing a central midfielder drop back between Benoit Badiashile and himself, this meant Monaco could enjoy a 3v2 overload against Montpellier’s first line of pressure. The fact he split into wider areas then meant he could drive upfield and search to create numerical superiorities in the half spaces or provoke an opposing midfielder out of shape to press him.

Furthermore, his positioning here meant he could cover behind his nearby fullback, Ruben Aguilar, if need be so he could bomb forward in the knowledge Matsima was providing cover behind him.

After his composed and very tidy all-round efforts, the recent comments of his former youth coach Manu Dos Santos certainly rang true about the mature, talented prospect. “As soon as he arrived, we saw his very even, calm personality. He is a young player who knows where he is going. Whether in life or on the pitch. As soon as he arrived he imposed himself as a starter, showing an ability to adapt that is far above average,” he told Monaco’s website.

“On the pitch, he is a natural leader, in particular in the effort he puts into duels. Very attentive, he has quickly worked on the small gaps in his reading of the game, an aspect where he sometimes lagged a little.”

Set for an extremely bright future, the man who idolises Sergio Ramos and was attracting interest from Juventus and Atletico Madrid in the summer, has certainly grasped his chances to impress Kovac.

Gaining vital first team experience at the highest level against some seasoned campaigners will unquestionably help his development, as Matsima hopes to cement a place in the starting lineup this season ahead of the likes Axel Disasi or fellow youth product Benoit Badiashile.

If he keeps up and builds on his strong form, there’s every chance he could do exactly that.