Meet Patrice Frank, at the head of the world’s biggest hotel wine cellar 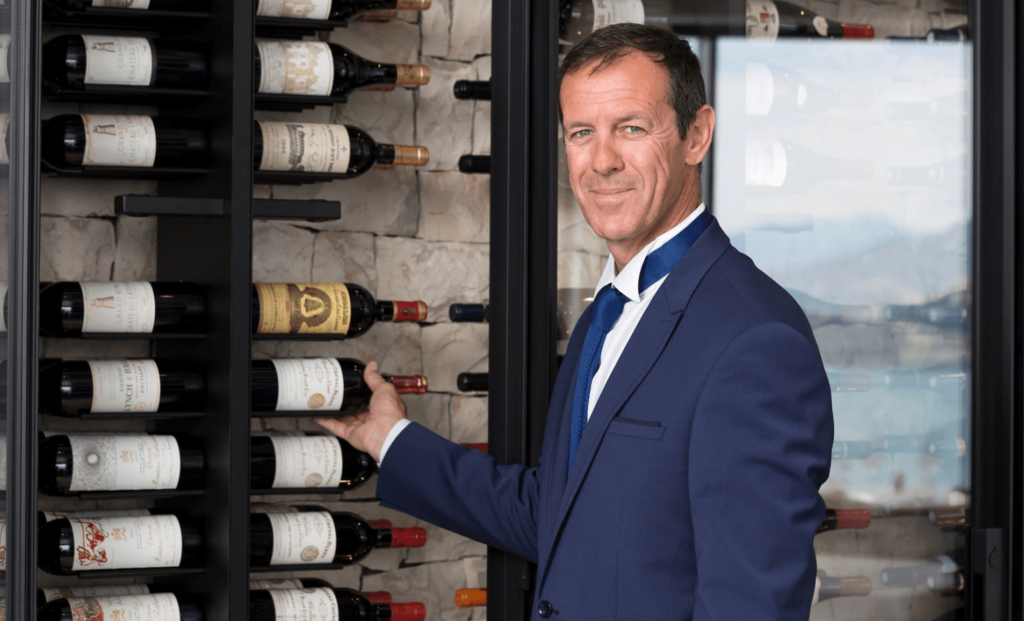 The love affair between Monaco’s Hôtel de Paris and Head Sommelier Patrice Frank started 20 years ago, but like any good wine, time has only made it better. For our first article on the people behind Monaco’s biggest employer, the Société des Bains de Mer, discover a former rugby-player who bet it all on his passion for wine.

“I was never really destined for the job”, says Patrice Frank. Born in the French city of Angoulème in 1967, the current Head Sommelier at Monaco’s Hotel de Paris had an unusual career start. After a sports-focused French baccalaureate, Frank played rugby professionally for six years, before settling for a law degree in Bordeaux. “One summer, a former step-parent of mine who had an upscale establishment asked me if I wanted to work for the season. I thought why not! I figured serving wine must not be too difficult and that I should be able to do it.” But a temporary stint soon turned into a permanent position. “I never set foot at university again!” jokes Patrice Frank.

After a sommelier diploma, Patrice Frank joins his step-family’s establishment. Several other jobs follow: he buys a hotel-restaurant in the Charente department, works as a sommelier in Luxembourg, before creating the Association des Sommeliers Poitou-Charentes et Sud-Vendée. It’s through the organisation that he first hears of a position at Monaco’s Hotel de Paris. The Head Sommelier remembers: “Frankly, I don’t really know what attracted me to Monaco at the time. It was the opportunity which I found appealing. Perhaps all just a matter of circumstance,” he says.

Frankly, I don’t really know what attracted me to Monaco at the time

In Monaco, he’s thrown in the deep end. “I started four days before the Monaco F1 Grand Prix. It was massive. I was supposed to lead a team of fourteen sommeliers, but I was a complete spectator. The Hotel de Paris was a machine driving itself, the teams were all perfectly autonomous. I brought my love for my work and my dedication but that obviously did not make the success of the 2000 F1 Grand Prix. It was a beautiful challenge but in that first week, I asked myself: what are you doing here mate? I came from the provinces. In front of me was an entirely different world. Everything was going too quickly. It was all too big,” he says.

But his passion for his work push him to try and understand this new environment, which he eventually comes to embrace fully. And what made him stick? Frank realised he had been given the once in a lifetime chance of working in the biggest hotel wine cellar in the world. Today, he is grateful for his work environment, for its beautiful setting, and for the clients of the Hotel de Paris. “At the Hotel de Paris, the client’s expectations are high, you can’t rest on your laurels,” he says. Patrice Frank helps the hotel’s clientele navigate some 300,000 bottles of wine, that cost anywhere from 80€ to 28,000€.

Patrice Frank is also part of the team of Société des Bains de Mer which chooses the Hotel de Paris’ wine collection. “We try to keep in mind the big picture. We have to be versatile and able to accommodate everything, from a banquet to a tête-à-tête dinner, and in both cases, we have to fully respect the client’s wishes.” A demanding position, which Frank enjoys. “What I like best is being in contact with the client, but also with my team. I come from rugby, where teamwork is key. It’s the same here. I care about every single one of my sommeliers,” he says.

It’s always a pleasure to taste good wine, regardless of whether it costs 5€ or 400€. It’s all a question of balance and authenticity

A life-long passion for wine

Patrice Frank talks of wine with the same profoundly human tone with which he tells us about his team. “It’s always a pleasure to taste good wine, regardless of whether it costs 5€ or 400€. It’s all a question of balance and authenticity. That’s the most important for me, that the product is well made and that it carries within it the spirit of the land that produced it,” he says.

And to succeed in the profession? A good sommelier needs one quality, he tells us: they need to be objective. “After so many years, the job hasn’t really changed, but I’ve developed a lot as a person. I have more experience,” he says. When we ask him about his tips for celebrating the new year, Patrice Frank admits that it’s difficult to choose wines without knowing the menu. “But parties are always a good excuse for drinking champagne. You can get through an entire meal with only champagne, especially if you throw some vintage in here and there,” he says with the daring tone of someone who is a master of their craft.