How the pandemic forced top Riviera chefs to reinvent their menu 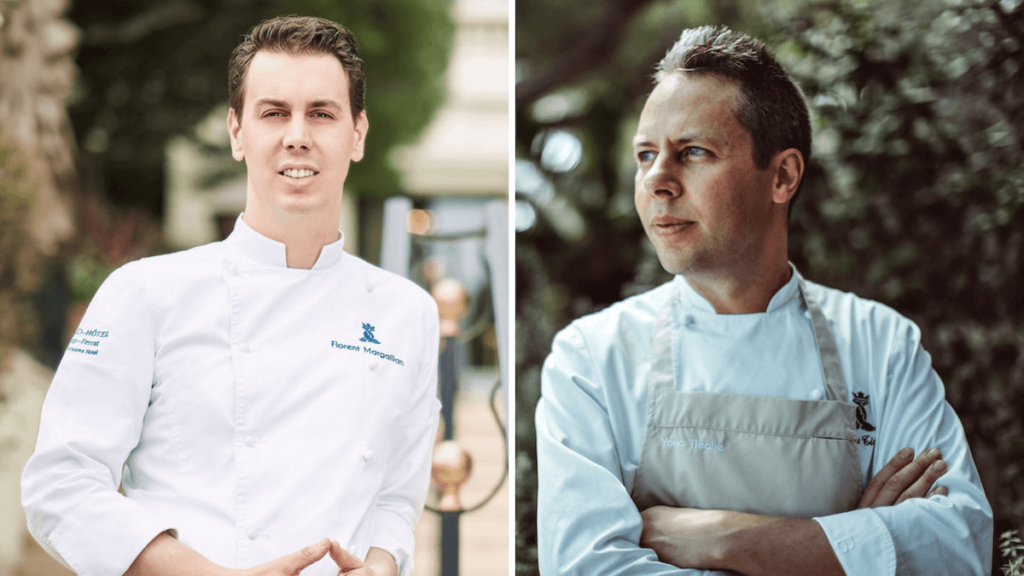 For Michelin-starred Chef Yoric Tièche and pâtissier Florent Margaillan, 2020 has transformed not only their lives, but also their kitchens. The duo behind the menu of the Grand Hôtel de Saint-Jean-Cap-Ferrat is reinventing their dishes, one lockdown at a time.

Yoric Tièche has a Michelin star. Born in Aix-en-Provence, he joined the Grand Hôtel du Cap after stints at the Negresco Hotel in Nice and at the Meurice in Paris.

33-year-old Florent Margaillan is 2010 France’s Champion de dessert. Before saying goodbye to his Parisian life and moving to the Mediterranean, he worked at the capital’s Ritz Hotel, as well as the George V.

>> READ MORE: Luxury hotels on the French Riviera: Hotel Negresco – an ode to Art and History

Both speak of cooking as an art form. “Our job is above all a question of passion and we have to commit to it completely,” says Margaillan.

Yoric Tièche says that there’s also a transformative dimension to it. Just like artists, cooks have to develop their art form. “When you reach a certain level as a cook or a pastry chef, you enter a process of endless transformation and research. You go to the farmer’s market, you look at the products on sale, and how they’re changing…” And the further up the career ladder, the easier the process:  “I no longer arrive at 9 am and leave at 8 pm, which means I have time outside the kitchens, time to think. I can take a step back, find other ideas, think about my cooking philosophy, without being stuck to a daily routine.”

Lockdown as a period to reinvent oneself

During lockdown, Florent Margaillan fooled around with the Riviera’s traditional desserts and ended up reinventing a tropézienne, which has now landed on the restaurant menu.

“You start looking for the simple life and turn your back on certain habits. This more natural, more instinctive approach can have its advantages,” says the pâtissier.

One concern that keeps coming back is the question of cooking with local and quality products. “During the first lockdown, I was at home with my family and had to cook with whatever food was available,” says Yoric Tièche. “So, when we reopened the kitchens at the end of June, we transferred our new habits to the restaurant. We’re now working more closely with locals farmers and fishermen.”

Florent Margaillan mentions his love of citrus fruits, which trickles down from his parents who were farmers. Lemons and oranges are emblematic ingredients of the Riviera. “The trick is to keep the fruit as it is”, he tells us, “If you cook it, it will lose its shape and taste”. In fact, Margaillan has such a soft spot for citrus fruits that for Christmas, he revisited the traditional Christmas log with a twist of lemon.

>> READ MORE: The father-son duo with a zest for the Riviera’s lemons

Yoric Tièche too cannot do without the South of France. The chef, who in 2016 was named by Gault&Millau the Great Chef of the Future (Grand Chef de Demain), was born in the region. Tièche does not hesitate to bring his own touch to the Riviera’s classics. In his restaurant, he has revisited stuffed courgettes, pissaladière and goatfish. His inspiration? A turn of the century book titled “La Cuisinière Provençale”.

Yoric Tièche is currently working on the reopening of the Grand Hotel in March. “We’re going to offer more authentic dishes, but also more original and playful combinations. We want to take a step back from tradition, go beyond the usual starter-dish-dessert and offer customers a completely new experience,” he says. And of course, with a new customer experience come new ingredients. Yori Tièche says he wants to work with a lot of vegetables, fish, fruit but also unusual flavours, such as ginger, candied lemon, or black garlic – “small touches that change the taste of a dish.”