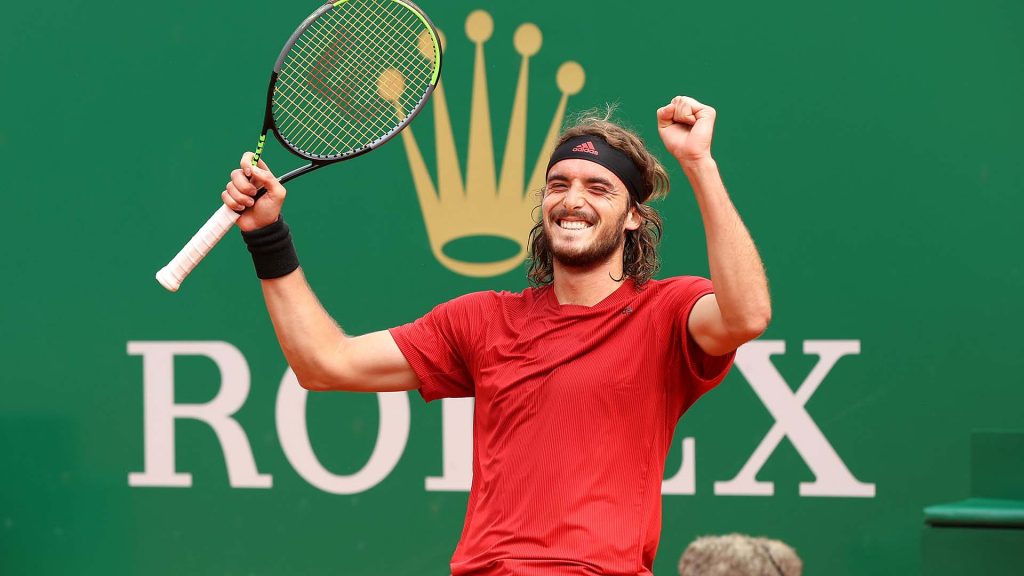 The Monte-Carlo Rolex Masters came to an end this Sunday as Stefanos Tsitsipas was crowned champion. An usual turn of events, taking place behind closed doors with matches knocking out both Rafael Nadal and Novak Djokovic, the most prestigious Masters 1000 tournament was full of unexpected twists and turns this year. Here are the three main highlights of this 2021 edition.

He finally achieved his dream of winning a Masters 1000 tournament. Here on the Rock, just a stones throw from the Mouratoglou Tennis Academy, where he trains year round, Stefanos Tsitsipas came out on top on his favourite surface. Beating Andrey Rublev in straight sets in the final (6-3, 6-3), this is the first tournament of its kind that the Greek has won. “It was the best week of my life,” he said after his victory. And rightly so! Winner of the 2019 Masters and currently ranked fifth in the world, he had lost out in his previous two Masters 1000 finals: Toronto 2018 and Madrid 2019.

Determined not to be beaten again, the 22 year old made great strides after Rafael Nadal and Novak Djokovic were eliminated and he succeeded in taking the most illustrious title of his career, playing on the clay court surface he loves the most. Following in his mother’s footsteps after she, Julia Salnikova, won the junior championship in Monaco in 1981, this new trophy could very well mark the beginning of a glowing career to come. A Masters 1000 under his belt and a killer backhand to play with, could he rob Nadal of his title at Roland Garros this year?

Everyone was betting on a final between the world number one, winner of the 2021 Australian Open, and the world’s greatest clay court player, eleven-time winner in the Principality. But when play commenced, neither of them even made it to the semi-finals. It seems the players may not quite have been in the zone, having both enjoyed a long break between the Australian Open and their matches in Monaco, compared with other tennis stars, such as Audrey Rublev, who arrived just a few days after his semi-final match in Miami, still very much in the swing of things.

Unrecognisable in his match against Dan Evans in the third round, the Serb, by his own admission, had a nightmare of a match on centre court at the Monte-Carlo Country Club. During a press conference, he spoke honestly: “to tell you the truth, this was one of my worst matches, the worst performance I can remember from the last few years.” As for Nadal, he made light work of the match against Federico Delbonis (6-1, 6-2) and claimed an easy victory over Grigor Dimitrov (6-1, 6-1), but the Spaniard was unable to hold off Andrey Rublev in the quarter finals (6-2, 4-6, 6-2). Roland-Garros looks more undecided than ever!

The rise of Andrey Rublev

He has been climbing the ranks for quite a few weeks now. Aged 23, the world number seven came so close to winning his first Masters 1000 title and this is not his only near miss of the season, as he also made it to the quarter finals of the Australian Open this year. However, after coming out victorious in his duel with Nadal, the Russian certainly became a player to remember. Known for his powerful forehand, Andrey Rublev has had a superb week on the Rock, despite his defeat against Tsitsipas in the final.

After playing some remarkable matches recently, this Moscow-born player has become a serious dark horse for the upcoming tournaments, starting with Roland-Garros at the end of May. Alongside him on the Russian team are Daniil Medvedev (ATP n°2), Karen Khachanov (ATP n°23) and Aslan Karatsev (ATP n°28) meaning Russian tennis may just be about to enter a new golden age.