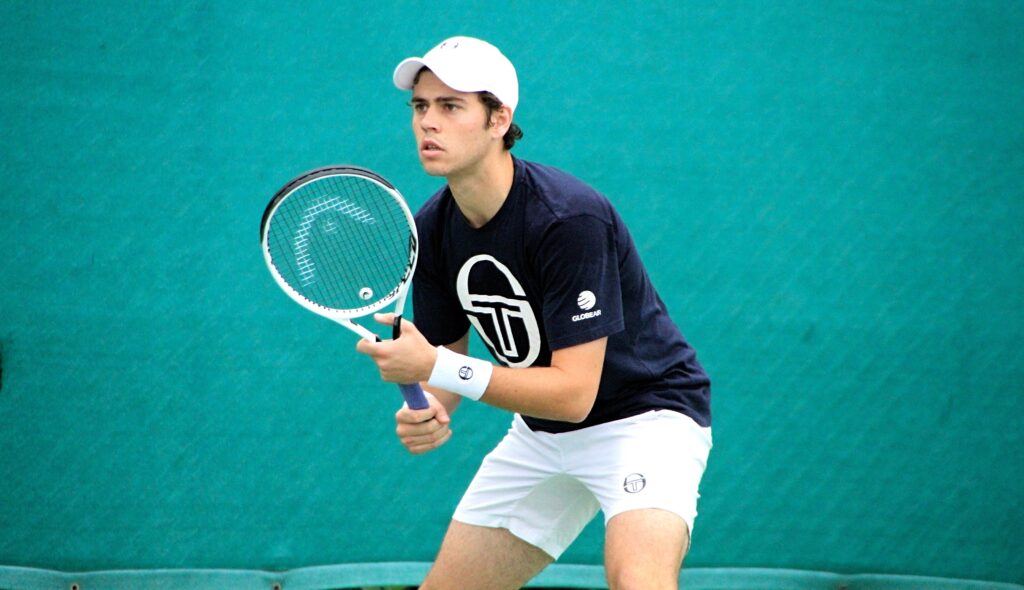 Cleary disappointed, he walked toward us with a deflated, almost defeated, look in his eye. He was beginning to suspect, inevitably, as he walked through the almost empty passageways of the Monte-Carlo Country Club, that the Rolex Monte-Carlo Masters, would not take place this year.

It is his tournament, the one that allowed him to blossom as a player. In the middle of the stands, all practically put together just to now be dismantled, Lucas Catarina welcomed us to his second home. “We’re not shaking hands are we?”

Since the announcement of France’s nationwide lockdown, the 114th edition of the Rolex Monte-Carlo Masters was cancelled and the Tokyo Olympic Games postponed to 2021. A few days this, the first Monaco citizen by birth to be ranked on the ATP (23 years old, 475th player in the world) spoke to us during a training session with his lifelong coach, Guillaume Couillard. Video interview.

My name is Lucas Catarina. I’ve been a professional tennis player for five years. I’m from Monaco, I live here, I’ve always lived here. I have been training in this club, Monte-Carlo Country Club, at the Monegasque Tennis Federation since I was 10 years old. I spend most of my days training on these courts.

My father and grandfather were football players. When I was younger, it was football at home all the time. Ever since I was a kid, I always dreamed of having a career in sport.

When I was about 7 or 8 years old, I played tennis one day to try it out. I liked it, I kept on playing and eventually, when I was 13, I had to make a decision. It was like a gut-feeling choice. For no reason, it was tennis, I wanted to continue in it, I was doing well. It’s truly a passion – sport in general.

When I was about 17 or 18, when I was taking my baccalaureate, I really knew that I wanted to do this and devote myself to touring with it, travelling all the time and really make it my profession.

Guillaume Couillard, coach: I’ve been training him for a long time, since he was 16-17 years old. He’s now 23. He’s a good kid, he’s a hard-working guy, he loves to progress, he’s a good listener. It’s a pleasure to train him.

It’s hard for everybody, in the sense that you travel a lot. It’s a sport that requires a lot of work, effort and sacrifice. Financially, the top 100-150 players earn a lot of money, more than at any other level. I’m lucky to be really well supported by the Federation and the Monaco Olympic Committee too, and in particular by other sponsors who follow me on a daily basis. Without them, it would be different. But it’s the sacrifices that have to be made to reach the highest level.

Guillaume Couillard, coach: He has an Andy Murray-like character, not always very happy, not always very satisfied with himself, quite a perfectionist, who asks a lot of questions and likes to have the answers.

There aren’t many of us from Monaco. I am always very proud to have the flag on the boards and to do my best, to show that we are small, but that we do also have a big sports scene.

The past two years were a bit complicated, during which my ranking was confirmed. Individual sport, I think, is especially tough at times, progress is sometimes a little or not always upwards. But I still knew that I was progressing in spite of everything and I see that since the beginning of the year my work is paying off. I hope it will continue like this.

The dream is to reach the Grand Slam, to be in the top 200-250 players in the world. There are things to work on, I still have a lot to focus on. I know that I still have a lot of room for improvement. I hope to reach my potential. Everything about Monaco in any case was always very important to me. Whether it was the Davis Cup, the Mediterranean Games, the Small States Games and of course the Olympic Games. It’s been a dream since I was a kid. I’m going to do my best to get there. Tennis is a little different from other sports. If it’s not Tokyo, I hope it will be Paris in 2024.