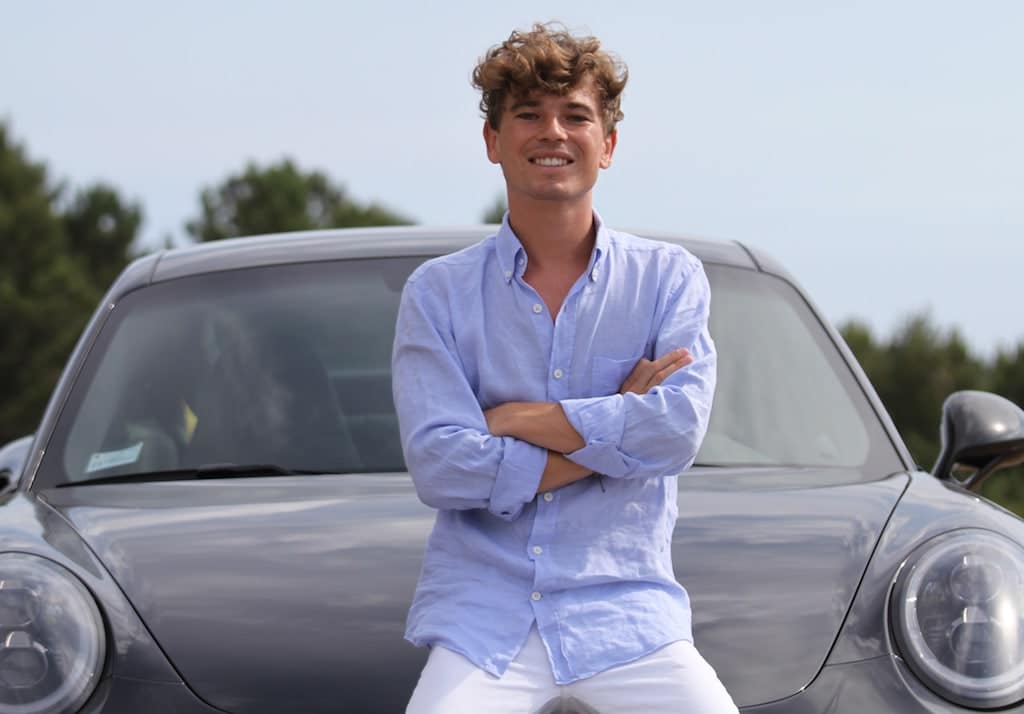 Sebastien Delanney may only be 24 years old, but he has already become one of the most influential car spotters around. The native of Nice has come a long way since he began to turn his love of cars into a side gig when he was only 12. He can now be seen driving around the Riviera in a Ferrari 430 Scuderia and a Porsche 911 Turbo S, the very cars he used to run after with his camera.

The deal was simple enough. “My parents had agreed that if I got good grades at school, they would take me to Monaco so that I could photograph the cars.” With its rumbling Maserati and bright Ferraris, the Principality has always been a haven for lovers of luxury cars. “My cousin and grandfather were into cars, so I began to share my finds with them.”

Whenever we were sitting at a café terrace, my mother would ask me to tell her the brands of the cars that drove by. Little by little, I knew them all by heart.

Inevitably,  the good grades kept on coming, and Delanney’s passion grew. “At the time, photo-sharing platforms did not exist,” he remembers. Once the shots were taken, the teenager would then post them on his YouTube channel. “It was the only way to get my grandfather and my cousin to see the cars.” Even if Sebastien Delanney did not know it yet, his childhood interest was about to change his life.

>> READ MORE : Gildo Pastor, a man in love with motorsport

Caught in the game, Sebastien Delanney keeps pushing on. Thankfully, he grew up in La Turbie, a French village perched up on the mountain behind Monaco. The hustle and bustle of the Principality’s cars was never too far away.  “To help train my memory, my mother would make me memorise all the car models,” he recalls with a smile. “Whenever we were sitting at a café terrace, she would ask me to tell her the brands of the cars that drove by. Little by little, I knew them all by heart.” What can we say – mothers know best.

When the number of views on his YouTube channel suddenly exploded, the slideshows of his car shots began to fall short. The first time Sebastien –“Seb” – turns on the camera, he is only 13. “Whenever cars drove by, I explained their features. And by dint of hanging around in front of garages, I ended up meeting a mechanic, who let me ride in a Ferrari.” Soon enough, Sebastien Delanney reaches his first milestone:  1000 YouTube subscribers. Then, monetization appears. “When that happened, everything changed…”

At just 15 years old, the young man with curly blonde hair crosses the channel. His goal? To reach Wales. “I wanted to attend a school that would be in tune with my personal ethos,” he explains. Delanney had previously studied in the French town of Drap, in a school which followed the educational philosophy of Celestin Freinet. “Whenever I came back to Monaco for holidays, I would take the opportunity to shoot all my videos, which I then would edit once I was back to Wales.” After his experience over the channel, Sebastien has a change of heart and decides to head south, to Madrid, where he begins university a year before his cohort. However, in his thoughts, a certain skepticism is gaining ground.

I was seeing some of my older friends in England quit their jobs to dedicate themselves fully to their YouTube channels.

“I was seeing some of my older friends in England quit their jobs to dedicate themselves fully to their YouTube channels. I didn’t want to miss the boat…” Sebastien Delanney makes up his mind quickly enough. He would go back to square one. He would go back to La Turbie. “My parents were definitely not happy about it,” he smiles. “They gave me 1000 euros and told me to make do with it. Thankfully, I didn’t have any rent to pay.”

To earn some pocket money when he isn’t busy editing, the young man, who happens to be a good friend of tennis player Stéfanos Tsitsipas, with whom he shares a passion for YouTube and videos, tries a gamble. “A friend’s father was selling his Maserati. I acted as a broker. The deal was that if I could sell it for the price he wanted, I could keep the difference.” With the difference in his pocket, the son of the former CEO for Europe of the Association of Tennis Professionals throws himself into his Youtube Channel. And so, begins a period of very little sleep…

“It was crazy. I was booking business trips, editing videos, negotiating partnerships. If I got home at 6 pm to start editing, I was happy. Usually I would get home at 10 pm and then edit for five hours.” The income from YouTube ads soars. “I put all my savings into cars.” A Lexus Elise, an Alpine A110, an Audi R8, a Ferrari 430 Scuderia, a Porsche 911 Turbo S and… a Renault Twizy. “For the ecological footprint and for everyday life.”

Everybody has started to understand the power of social media, but few people know how to use it well.

Sebastien Delanney is now the head of his own company and manages his own team of employees. He splits time between Geneva and Monaco and has begun to diversify his offer. “Everybody has started to understand the power of social media, but few people know how to use it well. I wanted to use my experience to support start-ups and sportsmen.” Thanks to a French YouTube channel (244,000 subscribers), an English one (220,000 subscribers) and an Instagram account (273,000 subscribers), Sebastien Delanney sees his community, “his family” as he likes to call it, growing day by day.

>> READ MORE :  Jean-Luc Noaro takes us aboard one of Monaco’s 95 taxis

Sebstien Delanney tells us that he knows that he is “living the dream”. He has even launched his own shoe line, which brings together stylish models and the joys of driving. And his list of projects is far from over. He tells us he wants to play a role in electrifying racing cars, and that one day, he dreams of participating to a motor racing championship. “It would be a nice touch, a way of showing that anything is possible in life.” You can never dream too big – just ask Sebastien Delanney.