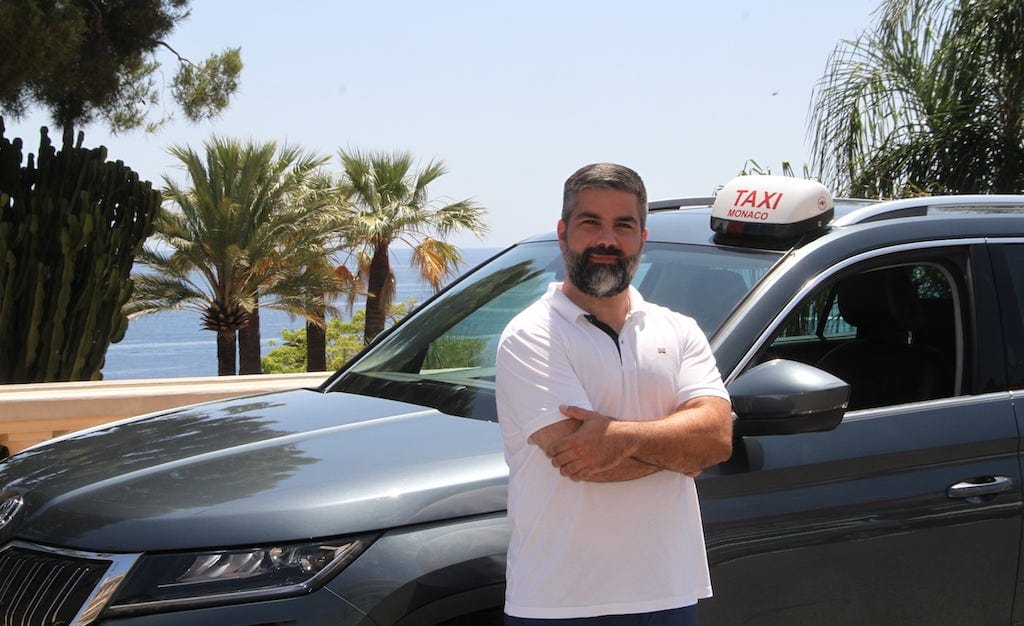 Three years ago, Jean-Luc Noaro joined the Monaco Taxi Association and became one of the Principality’s 95 taxi drivers. After a first career in finance and almost a decade in Monaco’s nightlife, Noaro has thrown himself in his new life with passion and drive.

The 2008 financial crisis turned the world around, something Jean-Luc Noaro learnt the hard way. “No bank was recruiting at the time,” remembers the former assistant manager for private banks. Before the crisis, Noaro had worked in Monaco, as well as in Belgium and Switzerland. “I lost my job and was forced to make a career change.” It would be the first of three revolutions in the professional life of the Côte-d’Azur native.

I needed a new challenge. One day, someone told me that a license* was up for sale.

It was then that Noaro discovered the charm of the Principality’s nightlife. “I had the opportunity to join the Sun Casino in Monte-Carlo,” he recalls with a chuckle.

He has all reasons to smile. What was initially intended as a three-month summer experience quickly turned into a permanent contract that lasted almost eight years. “My father had also worked there. I thought I would get a look behind the scenes. And I did really enjoy the experience.”

But, as the saying goes, all good things come to an end. When boredom slowly took over his every day, Jean-Luc Noaro knew that it was time for another change. “I needed a new challenge. One day, someone told me that a license* was up for sale. I saw it as an opportunity to do what I had been trained to do.” Noaro, who studied at the business school of Nice, says that the entrepreneurial aspect of taxis appealed to him.

And so, three years ago, the adventure began. After taking the leap, Noaro took out a loan for the license and purchased a brand-new SUV with his savings. “Nothing tops having the freedom to decide your working hours,” admits us Noaro, who in his free time enjoys Brazilian Jujutsu and playing guitar. “That being said, being a taxi driver is very demanding. On average, I work ten hours a day, six days a week.”

There is no sense of rivalry between us. There really is a good atmosphere. We’re just self-employed people working together.

In a normal year, the summer season is incredibly busy for Monegasque taxi drivers. To ensure that it all goes smoothly, a real team effort is required. “Some prefer to work at night, others in the morning. We all come together to decide. There is no sense of rivalry between us. There really is a good atmosphere. We’re just self-employed people working together. And anyway, the most important thing is that we provide the best possible service for our clients.”

>> READ MORE: Romain Goiran, a man mastering the art of bouncing back

Taxi driving is a profession in constant change and one that in recent years has been made precarious by companies such as Uber, which threaten the perennity of the job. In Monaco, where Uber is not allowed, the 70 taxi drivers of the Monaco Taxi Association are currently working on an app that will help them take their services into the future.

The taxi revolution is underway

“The point is to get clients to use taxis in a different way, without changing the job of the taxi driver. When the ride arrives, we will already know where we are picking clients up and where we are dropping them off. It doesn’t matter to us how the client arrives to their destination. What matters is how they book their ride.”

Once, I got kids who wanted to go skateboarding in the village of Roquebrune. I decided to call the parents before taking them to make sure they were okay with it.

The app does have its limits, admits Noaro. “It’s different if we’re dealing with underage clients,” he stresses. “It can be tricky to take them on board without an approval of the parents. Once, I got kids who wanted to go skateboarding in the village of Roquebrune. I decided to call the parents before taking them to make sure they were okay with it. The plan is for parents to have an account, so that they can get notified when their child calls a taxi and directly pay for their ride.”

A small-scale revolution that is sure to change the face of taxi driving in the Principality. The app is expected to be unveiled in the following months. Fully invested in his job – his passion, as he calls it – Jean-Luc Noaro is set on making a century-old profession evolve. A life behind the wheel, which he would not give up for anything in the world.

*To become a taxi driver in Monaco, non-Monegasques citizens need to purchase one of 40 available licenses. These licenses usually go up for sale when a former driver decides to change career or to retire. Monegasque citizens, however, need only submit a dossier to the Government in order to obtain a license.