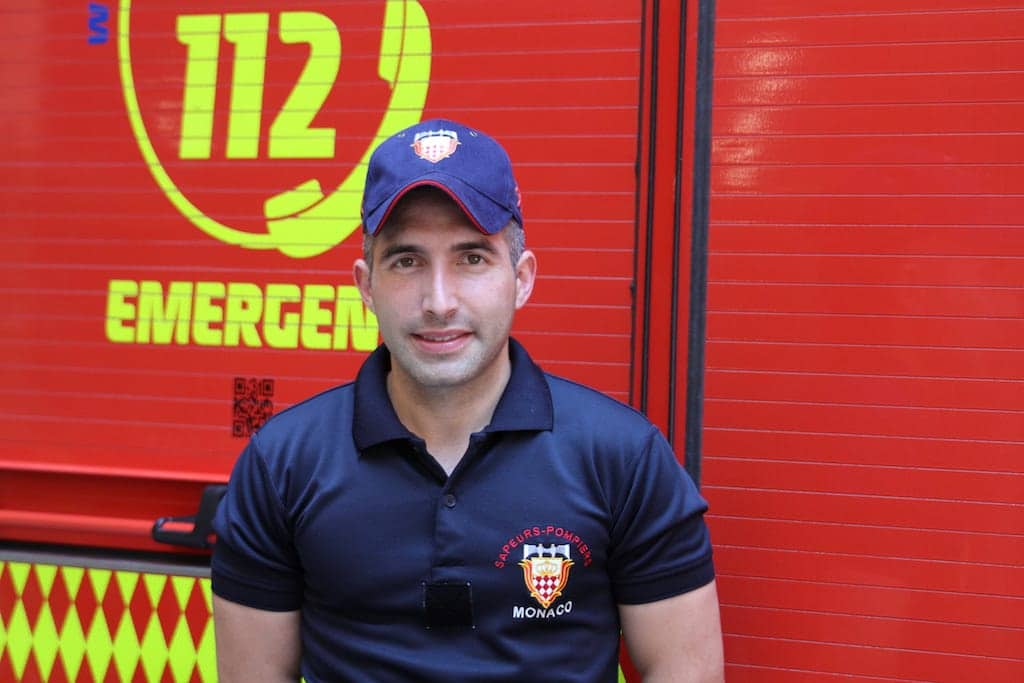 Since 2019, Jean-Antoine Odasso (29 ans) has worked as a firefighter with the Condamine emergency services. One of the 150 firefighters working in the Principality’s brigade, Monaco Tribune met up with this passionate recruit.

After meeting him, you start to wonder whether school teachers really kept forcing him to fill in those forms, year on year, the ones that helped keep track of students’ plans for the future. Did they really think his answer would ever change? He certainly had no doubts. For Jean-Antoine the answer to the question “what do you want to be when you grow up?” has been the same since day one. In fact, the only thing that changed when filling in those forms was the colour of the ink on the page. Whether it was blue or black, the letters always spelled out the same word: firefighter.

“I’ve always wanted to be a firefighter,” he says, his eyes shining brightly as he looks back on his childhood fondly, when he would spend days playing with toy ladders and little, red ambulances. “This is the only world I’ve ever known. I couldn’t do anything else. It was either this or nothing.”

In 2014, I was called up as a reinforcement for the Monaco Grand Prix, as were a lot of firefighters in the Alpes-Maritimes department

Having a fireman for a father, it seemed almost inevitable that he would follow in his footsteps. Aged 17, the young Odasso did just that. Embarking on his new journey, he made his way to the fire station in Andon, a town in the Grasse hinterland. Just a few miles from here was Escragnolles, the village he grew up in, renowned for its delightful walks and its countless waterways.

Out in the hills, he was much closer to the Principality than it seemed. “In 2014, I was called up as a reinforcement for the Monaco Grand Prix, as were a lot of firefighters in the Alpes-Maritimes department,” he explains. “I really loved the experience.” This would turn out to be a sure sign of things to come in Monaco.

The job of a firefighter is the same everywhere, but I wanted to serve the Principality, to continue working as part of the military

But before serving with Monaco’s prestigious Fire Brigade, this young recruit, originally from Grasse, enjoyed posts in a variety of other places. The first one being in Marseille. “I joined the marine firefighters.” After his stint here, he spent four years in the infantry.

A soldier at heart

A man drawn to the military and in love with the Côte d’Azur. After successfully finishing college, specialising in economics and social sciences, it was in 2010 that he finally felt ready to take the plunge. “I wanted to come here, to Monaco. The job of a firefighter is the same everywhere, but I wanted to serve the Principality, to continue working as part of the military.”

In order to do this, the 29 year old made his application, which was quickly accepted, before going on to pass all of his exams, both oral and written, with flying colours. As for the physical tests, he performed just as well. Jean-Antoine gave it his all, showing his skills, and received the precious reward for his hard work. In December 2019, he finally became a member of the Monaco Fire Brigade.

I like to go and recharge my batteries in the hinterland and get some fresh air.

“I fitted in really easily, but that’s mostly down to the team being so lovely.” Does he plan to stay in the Principality for a long time? “Of course I do,” he tells us, without the slightest hesitation. “I see myself spending the rest of my career here. I joined much later than most, aged 27, so with the age limit I don’t really see myself anywhere else.”

Aiming to become a sergeant

Just 1.5 hours from Escragnolles, he takes every opportunity he can to go back to the Grasse hinterland. A lover of the great outdoors and a big skiing fan, this is a place he cherishes and one that does wonders for him. “I like to go and recharge my batteries in the hinterland and get some fresh air.” All in a mission to come back even stronger, ready to serve the Principality.

>> READ ALSO: Alexia Barrier: sailing round the globe to save her marine “playground”

Living in one of the apartments belonging to the Condamine fire station, nicknamed “JA” by his fellow firefighters, he has to do two weeks’ worth of 24 hour shifts every month. Skilled at driving all the different types of engines, he dreams of one day becoming a sergeant. He pours his passion into his job, one that is not always the easiest, unable to hide his emotion when speaking about this role he loves so much.

When people call us, it’s because they don’t know what else to do. We share this distress with them.

“Some cases affect you more than others. When people call us, it’s because they don’t know what else to do. We share this distress with them. But we’re prepared for these sorts of situations.” Since birth, Jean-Antoine Odasso has grown up learning about this profession and how to succeed. In other words, how to save a life.