Stella Almondo, the young pianist shooting for the stars 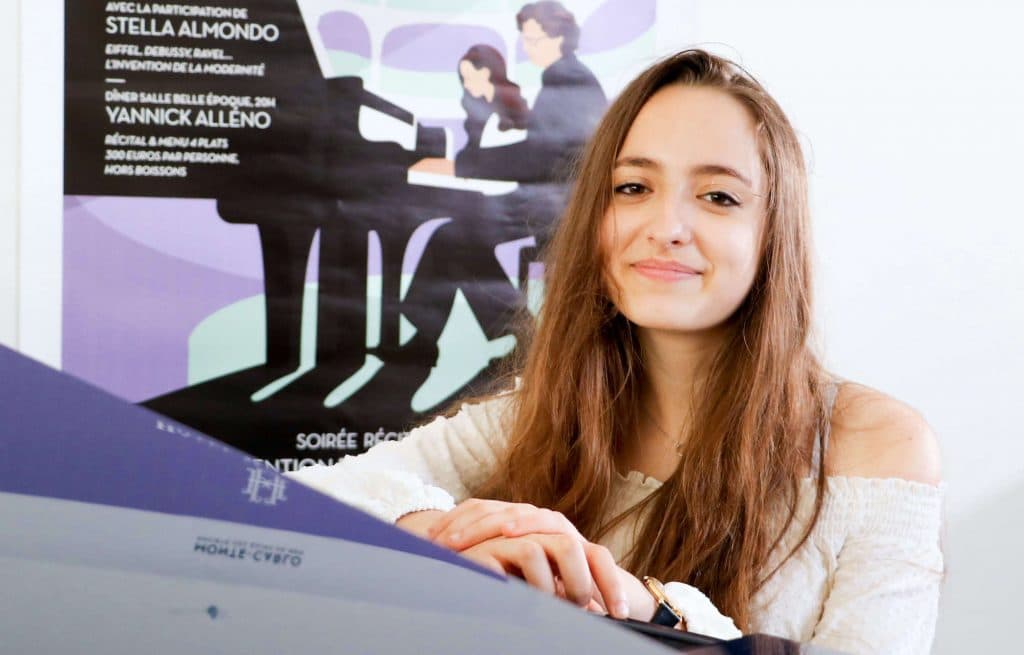 Aged just 15, the pianist Stella Almondo is excelling on the international stage, delighting audiences from Monaco to Moscow, and even the small screen. During her recitals, her emotion transports listeners to centuries gone by, as she brings works by Frederic Chopin and Franz Liszt to life.

“I get my inspiration from looking out at this blue infinity,” says Stella Almondo, in awe of the Mediterranean, music always on her mind as she marvels at the scenery. Today, the young Monégasque spends her days between the Côte d’Azur and Paris. “The high school in Cannes, the Conservatory in Nice and weekly lessons at the Schola Cantorum, not far from the Jardin du Luxembourg.” In all three places, Stella Almondo hones her craft, taking onboard invaluable advice and feedback from her teacher, the famous Russian pianist Igor Lazko.

A sensitive soul with a musical mind

From Tchaikovsky to Liszt, this teenager loves the sounds of the Romantic era. A musical genius, she journeys back through the ages, soaking up the rich array of emotions portrayed by her predecessors, conveying their melancholy through her pieces. “I’m very sensitive…I let my emotions guide me,” reveals Stella Almondo. It is by channelling her feelings into her piano that she plays her best pieces.

“At my piano, I make up a lot of stories and picture many landscapes. Often they’re from the Mediterranean and sometimes very colourful.” As she sways to the melodies, lost in the music, her wandering mind enjoys these moments of escape. “This is where I really thrive,” she says.

A perfectionist at heart, Stella Almondo has lost track of the amount of hours spent at her piano: “maybe around 20 a week”. Whilst her passion is clear, she knows it takes more than that to make it big. “Hard work, that’s it, there’s no secret. I’m lucky to have all these resources, but talent on its own is not enough.”

I can still picture her when she was little, forever going over to the hedges in our old back garden, listening to the sounds coming from the musician’s house opposite.

“In the house, you can always hear the piano,” tells Nathalie Bijou, mother of the young prodigy. “Her passion for this instrument requires a huge commitment. I admire her tenacity and how hard she works. It’s impressive!”

“I can still picture her when she was little, forever going over to the hedges in our old back garden, listening to the sounds coming from the house opposite,” recalls Nathalie Bijou, who supports her daughter, passionate about the piano for as long as she can remember. “When I was really young, I could already play songs from Walt Disney films on my kid’s piano… I played by ear until I was ten,” explains Stella Almondo.

From sheet music to recitals

Then came the lessons in music theory, her first scales and the joy of winning awards. “Frederic Chopin made her so happy,” beams Nathalie Bijou. In 2018, after playing several pieces by the famous artist, Stella Almondo won the Young Chopin competition in Switzerland. “That’s when things really took off.”

Already, several trophies line the shelves of her childhood bedroom. One of her most recent additions was the Best Talent Music of the year award, which she received on the 10 May at the Maria Callas Gala in Monaco.

In December 2020, Stella Almondo appeared on the small screen, during the TV show Prodiges, broadcast on France 2. “Millions of viewers watched the event,” explains the finalist, still overjoyed by the experience and delighted by all of the positive, constructive feedback she received.

Never without her piano

More than just a piano, the beautiful blue instrument sitting at the heart of her bedroom, opposite an audience of stuffed toys, is her “best friend”. A young girl who “attaches a lot of sentimental value to objects”, this is where Stella Almondo masters her sheet music. Covered with notes and annotations, as she prepares for her next concert, every note on these precious scores needs memorising.

“After spending many hours on the same piece, frustration often gets the better of me. Playing the piano requires a lot of concentration and working on yourself.” Every note matters. “The hardest thing is convincing yourself it can be easy!”

“I’m creating opportunities for myself so I can fulfil my professional dream. In years to come, I don’t want to have any regrets,” says the talented pianist. As people hear her play, she is heartened by the amount of support she continues to receive, particularly from members of the Prince’s Government. Amongst those singing her praises are Isabelle Bonnal, Commissioner General in charge of the Department of National Education, Youth and Sports and Françoise Gamerdinger, Director of Cultural Affairs.