District nurse driving around Monaco in his Formula 1 pedal car 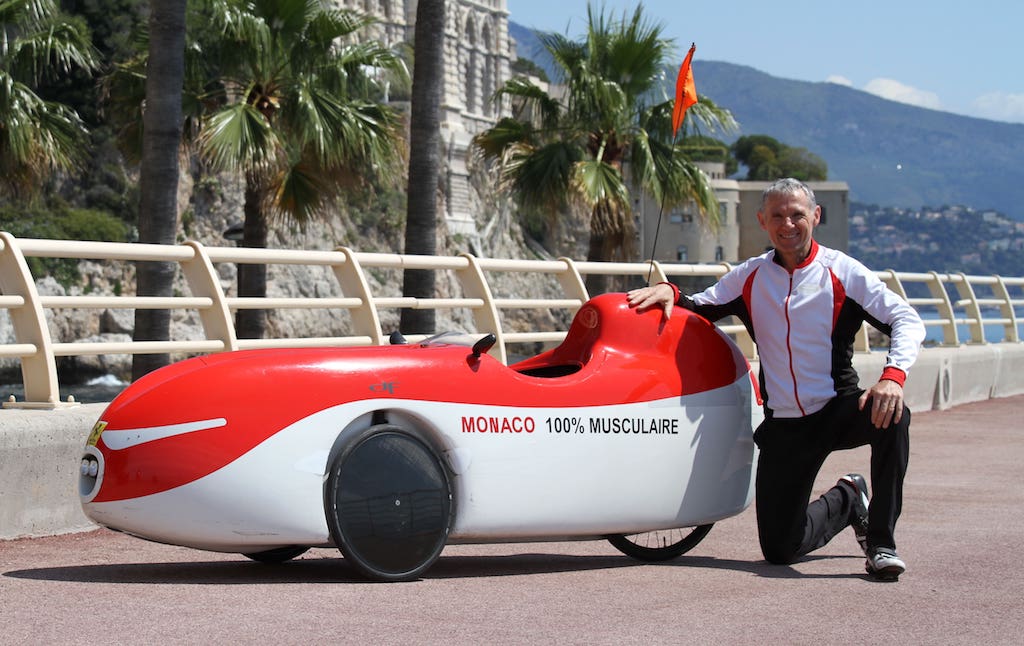 A huge velomobile fan, 63-year-old Igor Paliouk is hard to miss around Monaco. A district nurse with a big heart and a former orchestra conductor, this Ukrainian is breaking the mould. Some love him; others hate him. Deep down though, nobody truly knows him. Now, Igor reveals the real story about the driver behind the helmet…

Once seen, never forgotten. Everyone in the Principality is sure to have seen him moseying around the streets in his Formula 1 pedal car at least once. Starting out as a dentist, before becoming a district nurse, Igor Paliouk makes many trips around Monaco to visit his patients each day. Whoever he is checking in on, he is sure to arrive in one of his three velomobiles. “It’s hard to keep away from them,” he smiles, explaining that his passion for this type of cycling began around 15 years ago. “I started with recumbent bikes, but very quickly, I moved on to ones that were more covered, before finally using one of these fully shelled velomobiles.”

>> READ ALSO: “Drones often get a bad rep”: how Erwan Grimaud is flying Monaco to the future

Born in Lyiv in Western Ukraine, Igor came to France, settling near Marseille, thirty years ago. As a professional trumpet player and renowned conductor, he went on tour with a dance troop.. Despite frequent trips home to see his sister in Ukraine, he quickly fell in love with France. One day the former musician would take a trip to the Principality and never once look back.

I used to love going to the Monte-Carlo Symphony Orchestra

“I used to love going to the Monte-Carlo Symphony Orchestra,” he says. “I really liked their programme and how well they played. I also met my wife there too.” Married for 15 years, Igor Paliouk was able to obtain Monégasque citizenship. Now, settled in the Fontvieille district with Isabelle Avias, the trumpeter never goes a single day without a ride out on one of his velomobiles.

“It’s my only way of getting around,” he explains, before reconsidering, saying: “well no not really. I have my Twizy. When it’s raining heavily, I don’t want to damage my bike’s mechanics.” And rightly so! Paying 14,000 euros for the larger one and 10,000 euros for the two smaller ones, Igor makes sure to take good care of his wheels, manufactured in Germany and Holland. A founding member of the Vélomobile Club de Monaco, the Monégasque is saddened by how few people take part in this activity in the Principality and the rest of the Côte d’Azur.

“I know someone over in Antibes who does it, but that’s about it. To be fair though, it’s quite steep in the Principality, so it’s not always easy.” Whilst he spends most of his days here in Monaco, he sometimes enjoys a trip out to Gênes or Aix-en-Provence, cycling along the sea front. “I never take the motorway that’s for sure, but velomobiles are completely fine to use on the roads if you want to.”

People are on their phones and women do their make-up while driving; they aren’t checking their mirrors…

Cycling along, this 63 year old often hears words of encouragement from others on the roads and many passersby stop to admire his funny little contraption. However, not everyone is so enthusiastic about his passion. Many say what he does is far too dangerous. “In 17 years, he’s never had an accident,” explains Isabelle Avias, who constantly tries to defend her husband. “Me and Igor talk about it a lot and he often tells me that the people who don’t see him are the ones not looking. People are on their phones and women do their make-up while driving; they aren’t checking their mirrors.”

A few years ago he became the world record holder for the fastest velomobile. Along with three others, their team clocked up an average speed of 61.2km/h over a 24 hour period around a track in Germany. Despite these high speeds, Igor Paliouk aims to be a sensible, respectful road user in his day-to-day life. “I try to share the roads nicely with the other vehicles, being as respectful as possible. I’m no more dangerous than any other driver,” he says. Reaching top speeds of 50km/h, similar to an unlicensed car or a moped, his velomobiles are due to be repainted very soon.

“One day, a member of the Prince’s infantry said to me “in Monaco, Prince Albert II is the most well known person. After him, it’s your husband.”

“The bigger model will remain painted in the Principality’s colours, but at least one of the smaller ones will be painted yellow. Safety wise, it’s better. Yellow is more eye-catching. Recalling an old story, his wife laughs at the thought of her husband, already regularly noticed when out and about, attracting more attention to himself.

“One day, a member of the Prince’s infantry said to me “in Monaco, Prince Albert II is the most well known person. After him, it’s your husband,” she smiles. “Lots of people say to me that if it was their husband, they wouldn’t let them do it… but I’m not going to chain him to the house!” Passionate about his unusual way of getting out and about, Igor Paliouk intends to keep up his love for cycling for years to come.