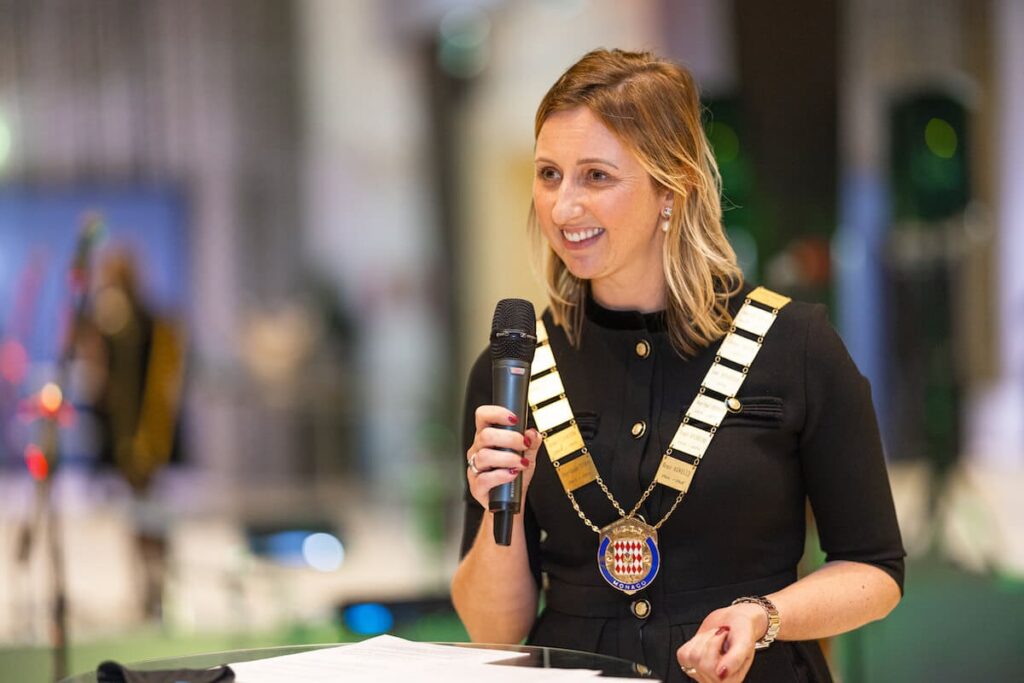 Mélanie Dupuy was elected last December to succeed Marion Soler. She took up her position on January 1st.

The torch has been passed on. After two years at the head of the Junior Chamber International Monaco (JCIM), two highly unsual years that were affected by the health crisis, Marion Soler officially handed over her powers as President to Mélanie Dupuy on December 15. An emotional handover ceremony for this 39-year-old Monaco resident and real estate manager at the Gramaglia agency.

“Marion and I shared the evening, we were very pleased with the transition between us”, remembers Mélanie. “It was the opportunity to present my roadmap for 2022 and my team. I am fortunate to be surrounded by good people and great energy.”

A roadmap that focuses on completing the projects that are currently under way. “When you decide to make a lot of changes, you have to see them through to the end. If we change everything every year, quality will drop. My aim is to really drive the projects that have been thought up by our members. They were tested at the end of 2021 but they need to develop momentum”. For example, “Innov’Inside”, to promote intrapreneurship and showcase the projects of their company’s employees. Also in store: public round tables and a mentoring project.

And despite a term that will still be overshadowed by the health crisis, the young woman remains optimistic. “I worked alongside Marion throughout this time, we had to rethink the movement. Today, there are fewer surprises, we know that we have to adapt to the situation. We continue to plan events, but always with a plan B.”

Since the moment I first joined the Junior Chamber, I’ve never wanted to leave it

Outside her comfort zone

The challenges do not scare Mélanie, who can rely on her experience and solid career. With a master’s degree in information and communication, the young woman worked in telecommunications and recruitment before joining the Gramaglia agency 5 years ago, then the JCIM in 2018.

“I really liked the economic and dynamic side of the Junior Chamber. As soon as I was able to join the movement, I helped organise my first event, the “start-up weekend”. Since the moment I first joined the Junior Chamber, I’ve never wanted to leave it.”

For her, being part of the JCIM also means getting out of her comfort zone: “We do things that have nothing to do with our profession. We discover and learn a lot of things, it’s very informative.”

With a certain sense of nostalgia she recalls her strongest memory in the Junior Chamber: her first speech in front of all the members, a few months after her arrival. “It was in the National Council assembly hall. It was a solemn moment, a moment of communion with the other members. I still remember what I said at the time, it made a big impression on me.”

SEE ALSO: Marion Soler: “Being president of the Junior Chamber International Monaco is unsettling, but fascinating”

“A year to guide”

Thanks to her involvement as a member of the Board of the Junior Chamber, as Vice-President for training and partnerships then Secretary, Mélanie Dupuy had little hesitation in standing for the presidency. “When I was elected, it was a pretty strong feeling.(…) It is an honour to represent a movement that upholds such fine values and that is recognised in Monaco.”

Mélanie is therefore approaching her term with confidence, and knowing that she can count on the support of her predecessor. “Marion and I have a special bond. Last year, as Secretary General, I was her main back-up. I supported her throughout the year, which was great preparation for succeeding her. (…) As President of the Junior Chamber we have “a year to guide”, we know we have this responsibility, but we don’t do things alone: we do them all together.”

And within the space of just a few days, since taking office on January 1, Mélanie Dupuy was already taking her role very seriously. “One of the things you get told most often is that the year goes by very quickly. All the former Presidents say so and I will no doubt say it when my turn comes”. A team seminar and a few meetings with the project managers have already been organised, to make the most of this term. “JCIM is aimed at working people aged 18 to 40. So my journey within the movement will be over at the end of the year.”

Until then, just one goal for the new President: to give the best of herself, as she does in all her undertakings.