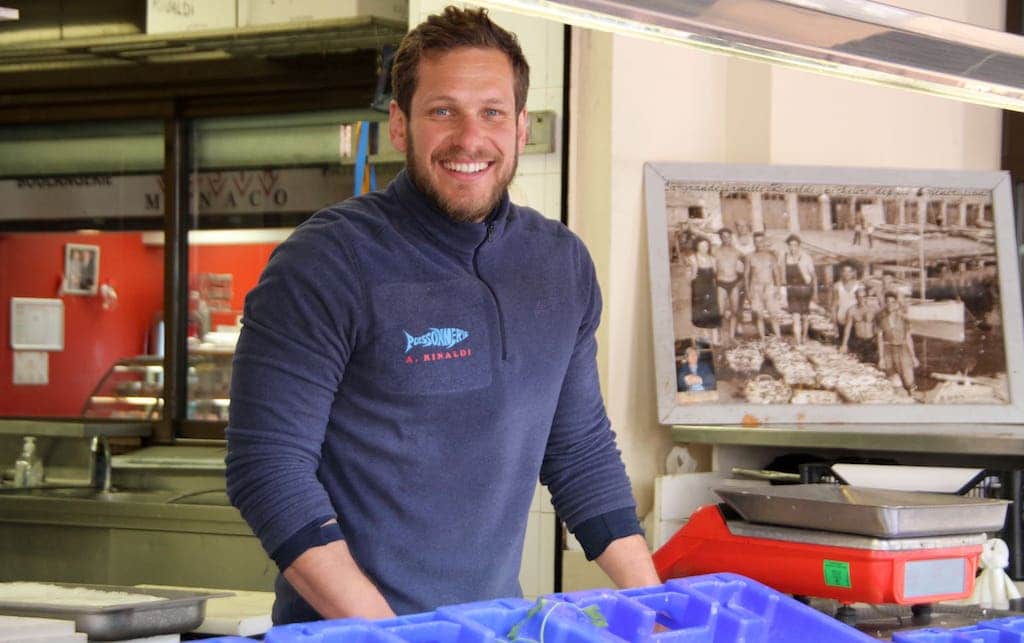 The elder of the Rinaldi brothers, who is just back from competing in the Winter Olympics in China, took over the family fishmonger business ‘Ange Rinaldi’ almost a year ago, to help out his father and carry on the family tradition.

The death of his 100-year-old grandmother, Jeanne Rinaldi, was a wake-up call for him.  Affectionately nicknamed Olga, she was a well-known figure in the Condamine market, and had fishing in her genes. “Her passing made me realise the importance of the family legacy,” says Anthony Rinaldi, his voice full of emotion.

An apron in the morning, a suit in the afternoon

It is true that fishing has been handed down through five generations of the Rinaldi family. And while the eldest of Olga’s six grandchildren didn’t immediately start down that well-trodden path, he is now the one who, for the past year, has been laying out the fish and shellfish on the ‘Ange Rinaldi’ stall that bears the name of his grandfather.

It is a beautiful, old-fashioned profession, with strong values, but it’s in decline. It isn’t easy to find young people who want to pursue this path

“My father (Charly) is still around, but he can now take his foot off the gas a little and travel. Well, that’s when he’s not helping my cousin Eric (Rinaldi) in the summer when it’s the season for big fish like tuna or swordfish”, smiles Anthony, who couldn’t see himself turning his back on the fish stall, even though he confesses to having more of a penchant for the mountains than for the sea. “It is a beautiful, old-fashioned profession, with strong values, but it’s in decline. It isn’t easy to find young people who want to pursue this path.”

After completing all his schooling in Monaco, Anthony, who will be blowing out 35 candles come July, turned to gardening. “I took care of cacti for seven years, before opening my business in the building trade.” Anthony Rinaldi has worked on private villa projects for his company, MR Construction, for ten years now. All this in parallel with another of the Rinaldi family’s shared passions: bobsledding.

Bobsledding to let off steam

“I started at the age of nineteen, before putting my modest career on hold from twenty-three to twenty-nine,” he says.”I had two children (now three) who took up a lot of my time. And reconciling all this with work was not easy.” In his wake, Anthony Rinaldi took the opportunity to transmit his passion to his little brother, Rudy. “He took up the torch!”

Emotionally, it is the greatest experience of my life after the birth of my children. The Olympic Games are a unique event

Together, Anthony and Rudy took part in the recent Winter Olympic Games in Bejing, China, along with Boris Vain. The Games will go down in history, as the bobsledders achieved the best result ever for Monegasque athletes in any Olympiad.  “Emotionally, it is the greatest experience of my life after the birth of my children. The Olympic Games are a unique event. It is the reward for three years of sacrifice and intense effort.”

A trip to the other side of the world that Anthony is not about to forget. “The opening ceremony was a fabulous experience. In terms of infrastructure, these were the most beautiful Olympics in history”, says the speed sports enthusiast who, when he’s not hurtling down a slope at 130 km/hr just millimetres off the ice, loves enduro on the trails of Monaco’s hinterland.  “I loved the Chinese culture and we were also able to attend some of the downhill skiing events, especially to encourage Arnaud Alessandria.”

An indelible memory, especially since the business owner  was taking part in his first and last Olympic Games. “It’s time to turn the page,” he says. “I’m getting older, so I prefer to focus on my professional life now.”

That means the fish stall, his company, but also other surprises, that Anthony Rinaldi prefers to keep to himself for the moment. One thing is certain, he will be right behind the bobsleigh team at the 2026 Olympic Winter Games in Milan. Again passing on the Rinaldi family torch.