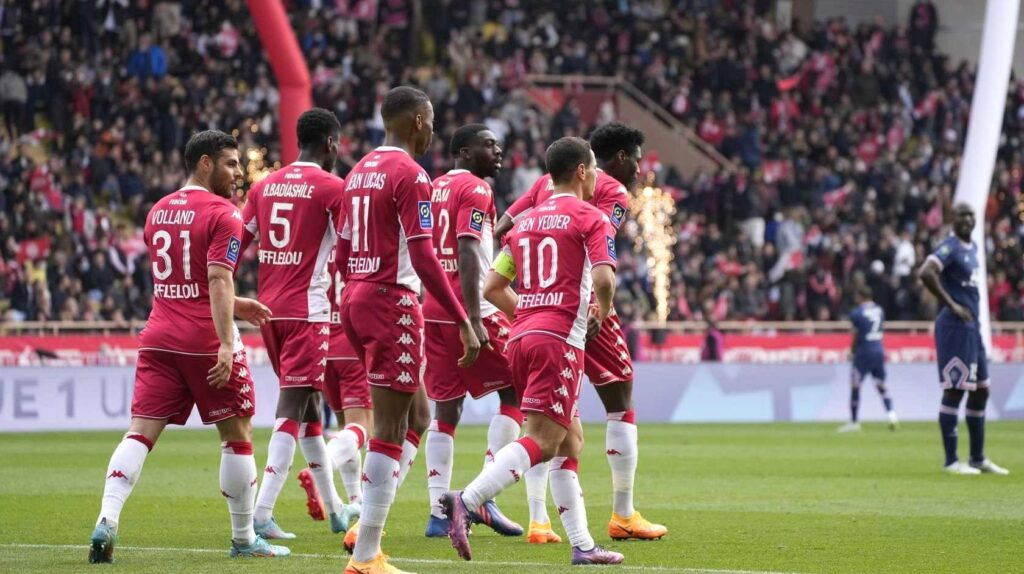 AS Monaco returned to winning ways in amazing style by defeating Paris Saint-Germain 3-0 at the Stade Louis II.

Having just bowed out of the Europa League, Monaco produced the perfect response to this disappointment, in a match where they showed just what a force to be reckoned with they are when they’re on top of their game.

Under the gaze of Prince Albert II, present for the occasion alongside the daughter of the President of ASM Ekaterina Sartori Rybolovleva with her husband Juan Sartori, Philippe Clement’s men certainly put on a show against the league leaders for all to enjoy.

Starting the match promisingly, it was great to see Monaco reward themselves, as they took the lead on 25 minutes through Wissam Ben Yedder’s instinctive finish. Kevin Volland then doubled the lead midway through the second half before Ben Yedder grabbed another late on to secure a famous victory.

This success allows AS Monaco to have a little respite and still dream of the podium at the end of the season. For that, it will be necessary to repeat this kind of performance after the international break.

One key question is will Philippe Clement still be in charge? According to information from L’Equipe, denied by the club, Dmitry Rybolovlev would indeed like to make in-depth changes next season. It’s up to the Petrov-Mitchell-Clement trio to reverse the trend and prove themselves indispensable with an end to the season worthy of that of last season.

With Ben Yedder grabbing a brace and Volland a single, Monaco’s prolific duo proved their class against the league leaders. Having been so outstanding and clinical last season, but struggled at stages this term, hopefully their return to form will be the catalyst for them to finish the campaign on a high.

Impressive in the heart of midfield in all phases of the game, Youssouf Fofana put in a shift full of upside. Serving as a key instigator in Monaco’s first two goals, with him firstly assisting Ben Yedder and then playing a precise through ball to Ruben Aguilar, who subsequently pinpointed Volland to score, his contribution was impressive going forward.

Robust and physically imposing on the defensive end as well, the talented Frenchman undertook his stopping work with energy and intensity on his way to chiming in with seven ball recoveries, two clearances and two interceptions.

Aside from Ben Yedder moving to outright first in the Ligue 1 scoring charts with 17, Monaco’s attacking threat was further highlighted by the fact they bettered PSG in terms of Expected Goals (2.02 to 0.75).

“We were keen to erase our eliminations in the Europa League and the Coupe de France. This victory before the break is good and puts an end to this bad series in the championship. Success finally turns to our advantage. I hope that will continue to be the case until the end of the season. In any case, we are not going to give up. The goal is to get a place in the European Cup next season. For that, you have to chain a series of victories. This is what we lacked until now.”

Active on social networks for several days to show their disappointment with the club’s recent results, AS Monaco supporters displayed banners at the start of the match, stating “like you, we are on vacation” and “welcome to the 45th Festival Cirque de Monte-Carlo”, to express their anger.

A chilling silence also dotted the stands of the Louis II during the first quarter of an hour, following the absence of the Monegasque ultras, before seeing them return and restore their voices throughout the meeting. Valuable support, which the ASM players returned by offering a clear victory against PSG. The beginning of reconciliation?

The gesture: ASM renews its support for the Monegasque Red Cross

A few days after having already announced that the club and its President Dmitry Rybolovlev had made donations to the Monegasque Red Cross to support the Ukrainian population, AS Monaco took the decision to donate part of the proceeds from the match to the Cross-Rouge Monegasque, in order to continue its support for civilian populations suffering from the armed conflict in Ukraine.