Awareness meeting for the protection of marine turtles 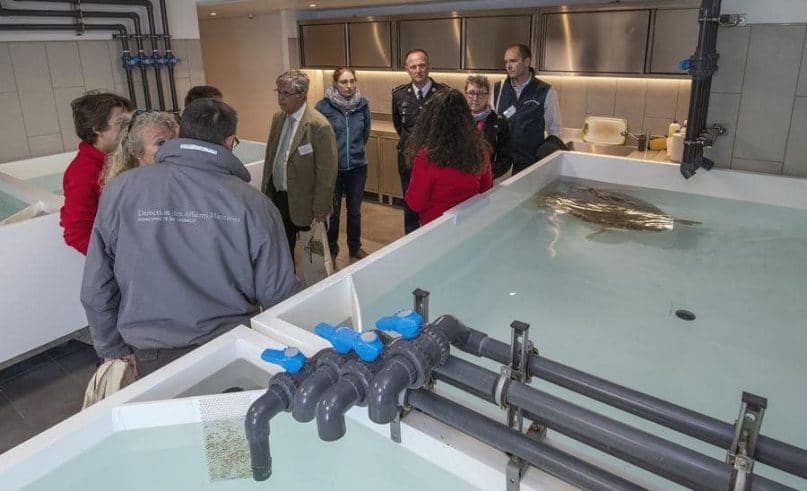 © Awareness meeting for the protection of marine turtles

More than forty agents gathered at the Oceanographic Museum to participate in an awareness meeting for the protection of marine turtles at the initiative of the Prince’s Government and the Oceanographic Institute.

Divers, boaters’ associations, fishermen, harbourmasters and other regular Monegasque practitioners were present to attend the sensitization meeting for the protection of sea turtles. While the new Monegasque Center for the Care of Marine Species (CMSEM), now operational, is preparing to welcome its first animals, the participants were able to discover the new structure and become aware of the rules of intervention and handling of turtles.

Becoming familiar with the proper actions when encountering a sea turtle was the objective of this sensitization meeting, which allowed the participants to acquire the right reflexes. Knowing how to identify a marine turtle is in distress, handle it in accordance with good practices, and reach out to specialized networks, which are all steps that constitute the chain of alert. This chain is fundamental to the proper handling of the situation.

The morning of mobilization will also have been the opportunity to take stock of marine turtle biology, threats to the species, as well as prevention measures being undertaken locally. Evidenced by the observation program led by ACCOBAMS (Agreement on the Conservation of Cetaceans of the Black Sea, the Mediterranean and the adjacent Atlantic Area), the ban on single-use plastic products, or the BeMed project initiated by the Prince Albert II of Monaco Foundation.

The secondary objective: awareness and public engagement, will be approached with  April 27th opening of “The Sea Turtle Odyssey.”

CMESEM, a new actor in the conservation of endangered species

The CMSEM is part of an ambitious program that the Oceanographic Institute and its partners have been conducting for several years to raise awareness and act for the conservation of sea turtles. The center now participates directly in the conservation of these endangered species and collaborates in the programs of study which are dedicated to them.

“We are delighted by the launch of the CMSEM and the enthusiasm it generates among Monegasque stakeholders involved in the protection of the ocean. It is an important tool for the Principality of Monaco and its actions in favor of the environment. With this new center, we are very clearly involved in a collaborative dynamic; on the one hand, the network of health centers around the Mediterranean that we reinforce, on the other, a collective of sea users committed to our side,” says Marie-Pierre Gramaglia, Government Counselor – Minister of the Equipment, Environment and Urbanism.