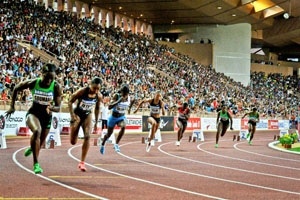 The Herculis EBS meeting arrives at full speed and promises confrontations between the best athletes in the world.

On July 12, the Monegasque spectators will see what is best in the world of athletics, with the presence of several Olympic and world medalists.

Voted the best meeting of the world in 2018, the organizers are giving themselves the means to keep the head of the balance sheets this year.

In 2018, Kevin MAYER was measured by the specialists in shot-put and 110m hurdles. This year, he will line up with the javelin to face the world’s best and try to beat his personal best (71.90m). In front of him, the German references Thomas RÖHLER, Olympic champion, European champion and winner in Monaco in 2017, as well as Johannes VETTER, World champion in London.

100m: the return of Noah LYLES

In Louis II, the 100m never disappoints. After BOLT in 2017, we will start this year with three current sprint references. The American Noah LYLES, who set a new meeting record of 200m last year with a time of 19.65, will be back this year and will face Filippo TORTU, Italian record holder in the 100m (9 ” 99). The LYLES / TORTU duel is also highly anticipated since, in 2016, these two athletes had finished 1st and 2nd of the Junior World Championships. This confrontation will be refereed by Bigtian SU, winner of the Asian Games and holder of the record of Asia in 9.91 since June 2018.

200m: the confrontation of the champions

The women’s 200m will be one of the events to watch this year, with three medalists from the last World Championships. After breaking the IAAF Diamond League record last year over 400m (48”97), Shaunae MILLER UIBO will line up this year on the half-lap of the track. It will be opposed to Marie-Josée TA LOU, winner of the 100m last year and Dafne SCHIPPERS, world champion and Olympic vice-champion on 200m.