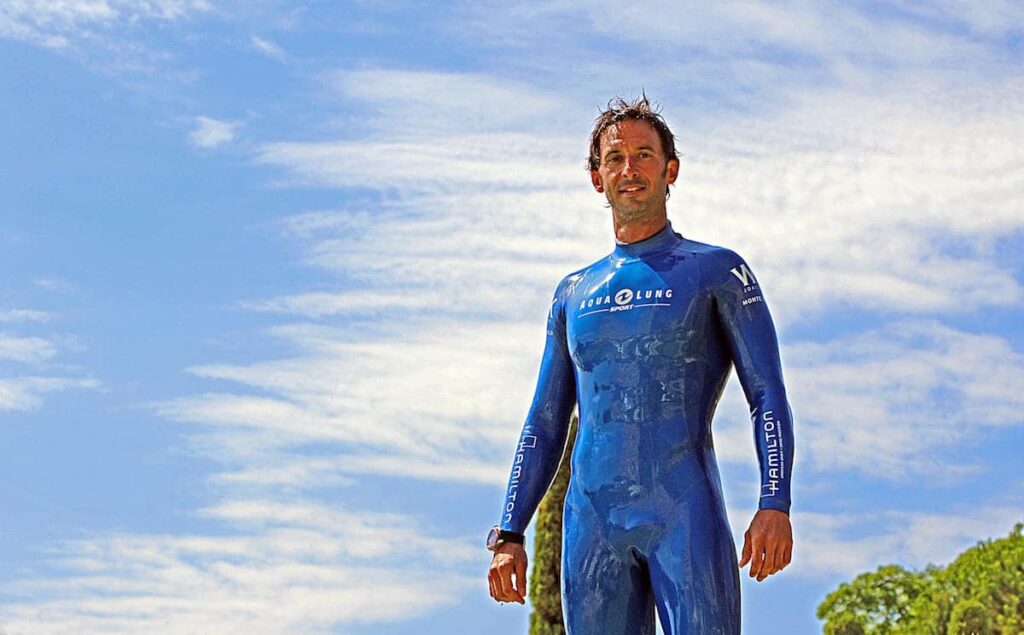 Our latest Hero of the Mediterranean is Pierre Frolla, Monégasque freediver whose newest project is a book on the world’s sea life. Meet a man in love with the sea, who has dedicated his life to fighting for the environment.

Currently, Pierre Frolla is quite literally on the other side of the world. More precisely, he is 600 km off the western coast of Mexico, on the island of Socorro, with teammate and photographer Greg Lecoeur, who is the brain behind Frolla’s latest book: Frolla, At The Heart Of The Ocean.

“The idea is to take pictures around a specific theme: man, completely free, next to large marine animals, in jaw-dropping settings in all the oceans of the world,” Pierre Frolla told us a few weeks ago as we sipped on coffee at L’Ecole Bleue, Frolla’s diving school on Port Hercule in Monaco. “I met Greg almost fifteen years ago in Cuba. We were doing a photoshoot with sharks and crocodiles. We became friends and have now embarked on this journey. We’re doing five different trips all around the world,” he says.

You should keep in mind that at the end of the 19th century, Monaco was a village of fishermen, olive oil makers and lemon growers.

The pair has travelled across the globe, from Polynesia, Mexico and Southern California, to Mauritius island and Greenland. Along the journey, they’ve shot pictures with the superstars of the oceans, including humpback whales, sea lions, big rays, bottlenose dolphins, sperm whales and Greenland sharks. Frolla is studying their migration pattern. “The project spans two, two and a half years,” he says. “The book, written in the tradition of Yann Arthus Bertrand’s Earth from Above, has 250 pages and nearly 200 photos and will be officially released in autumn 2021. In parallel with this book, we are also shooting an 8K documentary with director Kevin Sempé. The aim is to raise awareness about protecting nature,” Frolla adds.

Frolla’s father was a member of Monaco’s spearfishing team

Born in Monaco in 1975, Pierre Frolla fell in love with diving at a young age. “When I was four, I remember trying to catch octopus and crabs,” he says. His father, who was a long-time member of the Monégasque spearfishing team, paved the way for young Pierre, who very quickly became aware of the importance of protecting the environment and the sea. “You should keep in mind that at the end of the 19th century, Monaco was a village of fishermen, olive oil makers and lemon growers. So, in the 70s, the Mediterranean identity was still very much present in people’s minds,” he says. As his father travels the world “at a time when one didn’t travel much”, young Pierre grows up listening to fascinating stories. “My father gave me the desire to live-out my passion on a day to day basis,” he says. And soon, Frolla turns his love of the sea into a profession.

In parallel with his budding career as a diving instructor, Frolla’s competitive spirit leads him to perhaps unexpected success. “I wanted to see who was the best and ended up winning,” he explains. Pierre Frolla ends up breaking the freediving world record four times. But soon, life as a world-record breaking athlete starts to weigh on him. He knows that his raison d’être is elsewhere. So, he decides to focus his attention on expeditions, in all their forms. “I took pride in teaching and in protecting the environment, but I was a little ashamed to be just an athlete,” he admits.

Today, Frolla says that what he likes best is training young people. “What gives me the greatest satisfaction is sharing my experiences,” he says, adding that he hopes his stories will touch people and make them aware about the necessity of environmental protection. “We have no choice,” he tells us. “We have between 3,000 and 5,000 children every year in the diving school. I actually have a plan for a children’s cartoon that would get the message across, but broadcasters are reluctant to commit. To complete this project, I need sponsors, but it’s often these very same sponsors who pollute, so…”

If you do not protect the environment in which you live, you are doomed to disappear

But Pierre Frolla isn’t the kind of person who gives up. “I’ll win the fight, sooner or later. If you do not protect the environment in which you live, you are doomed to disappear,” he says. What about politics, that would perhaps be a way of getting his message across? “No, I don’t believe in it any more,” he says. “Nicolas Hulot [environmentalist, ex-French environment minister] is proof that it doesn’t work. The man whom I consider one of the greatest environmental fighters gave up because he realised that it was all a big joke. His most beautiful gesture was to step back, to show everyone that even he hadn’t succeeded. It’s a powerful gesture.” So what’s the key? To share one’s knowledge, he says, again and again.

>> Did you enjoy this article? Have a look at our “Ocean” section.