Climate change and grape-growing: is wine still flowing or are vineyards drying up? 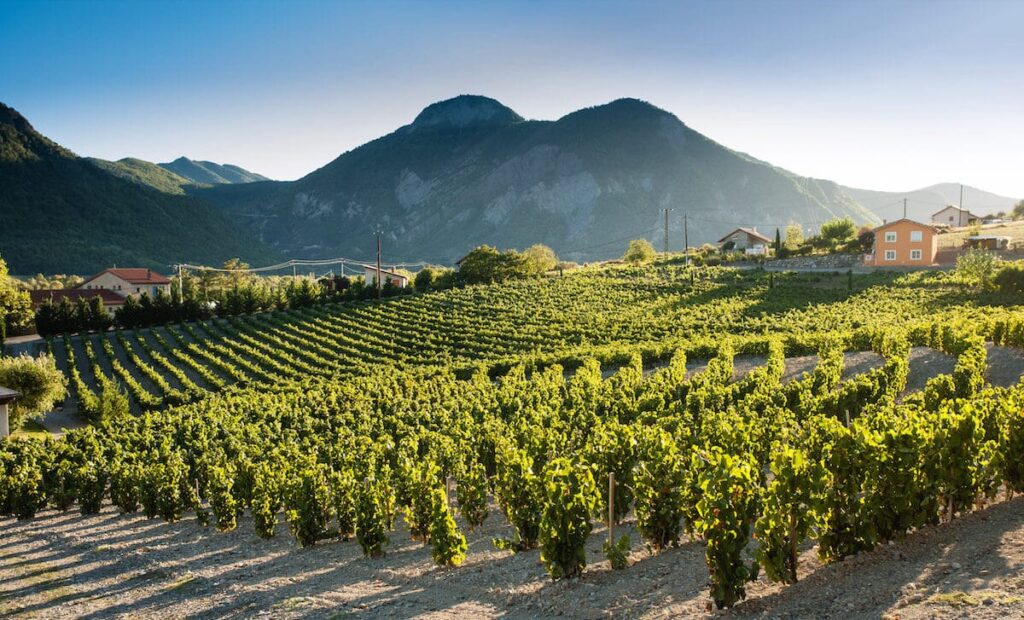 Will vineyards be the next victim of climate change? Whilst extreme heat and drought are predicted to one day threaten the vineyards of the Cote d’Azur, changing weather patterns do not spell bad news for all winegrowers. Despite temperatures rising by 0.3C every decade in the Hautes-Alpes region, they look set to become the future producers of France’s finest wines.

Located at the summit of Monaco’s neighbouring mountains in Nice is the Château de Bellet. Here, their 13 hectares of wine-growing land is at the mercy of the changing Mediterranean climate. Most recently, their vineyards have experienced extreme periods of drought, as did many others along the Côte d’Azur. This type of climate imbalance may one day impact the quality of some of France’s finest wines. “Some vineyards have already installed irrigation systems” laments Ophélie Guinard, Manager at the Château de Bellet, who has not yet been able to invest in “such pricey equipment.” She is also worried about seeing a repeat of 2017. In this “particularly dry year”, she made 30% less profit.

The real worry is whether the wine will still taste the same, whether we can guarantee consumers that same quality

“Grapes are usually harvested from mid-September onwards, but this date can be brought forward. Sometimes the harvest starts as early as the end of August,” explains Ophélie Guinard, who has noticed this change over the last ten years. “We harvest our grapes over a shorter period nowadays. It generally takes around three weeks, as opposed to the previous six. Working so quickly makes for great exercise!”

“Whilst the vines themselves may be able to adapt to this change in climate, the real worry is whether the wine will still taste the same, whether we can guarantee consumers that same quality,” explains Iñaki Garcia de Cortazar of the INRAE ​​Provence-Alpes-Côte d´Azur research centre in Avignon. The scientist describes how rising temperatures, during both day and night, are likely to significantly alter the flavour of the grapes and thus the taste of the wine.

>> READ ALSO: Côte d’Azur and climate change: what does the future hold?

Vines adapted to the changing climate

According to this scientist, the option of engineering new types of vines, better adapted to the changing climate, is not yet feasible. This sort of make-over would easily take around ten years, and that is without including the time it would take to get wine merchants on board with the new product. However, she went on to say how “other solutions do exist…it may be possible to: identify which vines in the yard are currently best surviving these new weather patterns and plant more of them; invest in grape varieties native to the region that are no longer grown locally but have been preserved in the area or grow vines that are already known to thrive in warmer regions of the Côte d’Azur, such as Italian or Greek grapes.”

Today, fine wines from the Alps are increasing in appeal, especially to lovers of less alcoholic wines

Areas that were never considered as having optimal conditions for grape growing may become home to France’s finest wines of the future. “Over the last 20 years, wine production in northern and mountainous regions in France has greatly improved,” affirms Iñaki Garcia de Cortazar.

Nestled on the hillside in the Durance region of the Alps, one German vineyard is also reaping the rewards of these new weather patterns. Up in the mountains, the altitude is around 700 metres and there is plenty of sunshine. Laetitia Allemand, owner since 2017, tells of the “sunny days and fresh nights” experienced on the family vineyard, created by her grandfather in the 1950s. Near to the Chardonnay vineyards, a local variety of grape, previously uprooted at the end of 20th century, is now being grown again. Known as the “Mollard” it literally translates to “little mount.”

A forgotten vine brought back to life

In the 1980s, Mollard vines were replaced in the Hautes-Alpes region by more favourable international varieties, such as Cabernet or Merlot vines. Today, throughout this part of France, only a few Mollard vines remain. Any that do exist are in very poor condition. According to Laetitia Allemand, “50 years from now the Mollard could very well have disappeared.” However, “her father was able to save the species, after around ten years of experimental farming. Each year he picked the best of the crop and replanted the strongest vines with help from the French Institute in Vine and Wine (IVF).”

Protecting this species has more than paid off as it seems to be very well adapted to the changing climate. “By budding later, it escapes the springtime frost, unlike our Chardonnay vines which bud earlier in the year,” gushes Laetitia Allemand. In fact, higher temperatures are actually better for the Mollard crop as they have increased the amount of sugar in the berries and reduced their acidity. “Today, fine wines from the Alps are increasing in appeal, especially to lovers of less alcoholic wines!”