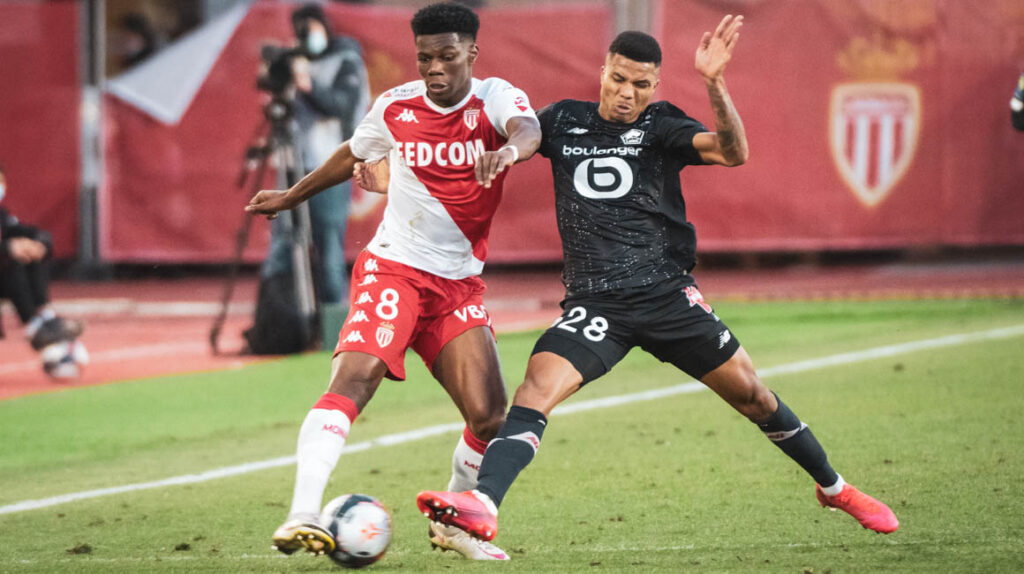 AS Monaco ultimately had to settle for a draw following a solid showing against Ligue 1 leading Lille. Here are our player ratings from the match.

Benjamin Lecomte (6): Produced some assured saves to deny Lille on many occasions. Will be delighted with the clean sheet and his sound overall performance.

Axel Disasi (7.5): Put in an excellent shift at the back, with his strength and speed ensuring he handled Lille’s dynamic attackers pretty comfortably. Authoritative in the tackle and clean with his interceptions, Disasi was vital towards shutting out Lille. Replaced by Djibril Sidibe.

Benoit Badiashile (6.5): Another polished display from the youngster. Rarely troubled in his duels and drove forward on the dribble with intent before hitting some concise passes.

Guillermo Maripan (7): Dealt with threats smartly when called into action. Dominant in the air and hardly put a foot wrong all night.

Caio Henrique (6.5): Couldn’t find his best level, but was still very serviceable. Surged forward down the left to join attacks, as Monaco were keen to target this flank. Will know he can improve his final ball. Was defensively competent too.

Ruben Aguilar (6): Tenacious and determined, his pressing and defensive output was impressive. Always looked to give his teammates an option going forward with his marauding runs. Just lacked a bit of class in possession. Replaced by Stevan Jovetic.

Aurelien Tchouameni (7.5): Another mature and disciplined performance by the youngster, who was at the heart of everything in midfield. The fact he led his team in tackles (seven), won aerial duels (six) and dribbles (four) illustrated his quality with and without possession.

Youssouf Fofana (6.5): Steady without standing out, Fofana worked hard to break up play and impose himself defensively. Passing wasn’t at its best, with his radar slightly off, but still proved his worth.

Aleksandr Golovin (6.5): Enjoyed a terrific first half, with his movement, technical skills and intelligence seeing him shine. Set pieces were also exceptional, in a match where he created three chances. Replaced by Sofiane Diop.

Kevin Volland (6): Embarked on some tidy runs down the channel and took up promising positions centrally, with him always keen to get involved. Struck four shots and was dangerous on the dribble, but ultimately couldn’t breach Lille’s backline. Worked hard defensively, pressing actively and with intent.

Wissam Ben Yedder (6): Dropped deep and held up play effectively before combining nicely with his teammates. Wasn’t his night either in front of goal, as he had a goal disallowed by VAR for offside. Replaced by Cesc Fabregas.