Exhibition: Monaco station as you have never before seen 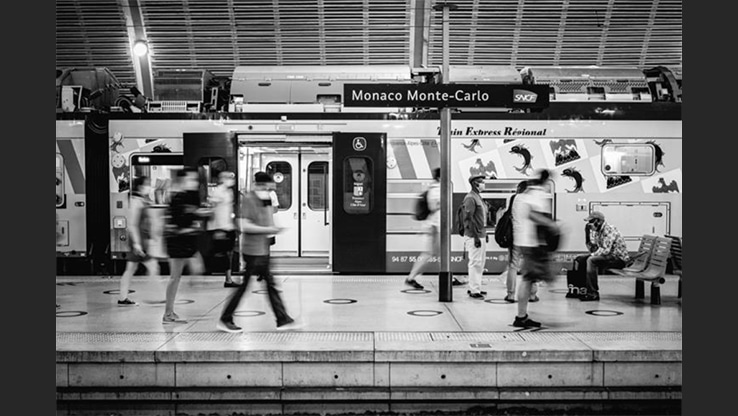 Did you know that 7.5 million travellers pass through Monaco station every year (2019 figures)? Workers in a hurry, curious tourists, lovers of the Principality… All these very different profiles cross paths at the second largest station in the Alpes-Maritimes department.

Monaco’s railway station celebrated its 20th anniversary in September 2020. However, the Principality’s railway dates back much further: the inauguration took place in 1868 to be exact. Today, its modern architecture and well-designed lighting on 13 underground levels often provoke admiration from passing travellers.

An exhibition dedicated to street photography

To mark the 20th anniversary of Monaco station, a photo exhibition will be held in the building from 28 September to 28 October 2021, in partnership with the French Embassy. The exhibition will feature the photographs of Tony Daoulas, who has travelled the world to immortalise the rails here and elsewhere.

Through his black and white photographs, we discover the Monaco train station, this very familiar place, in a completely new light. The habits of travellers, whether they are strolling or determined, are highlighted in the building’s minimalist interior. A must see if you have the opportunity, during one of your train journeys…