Zhang Zhang: “Music can support any cause” 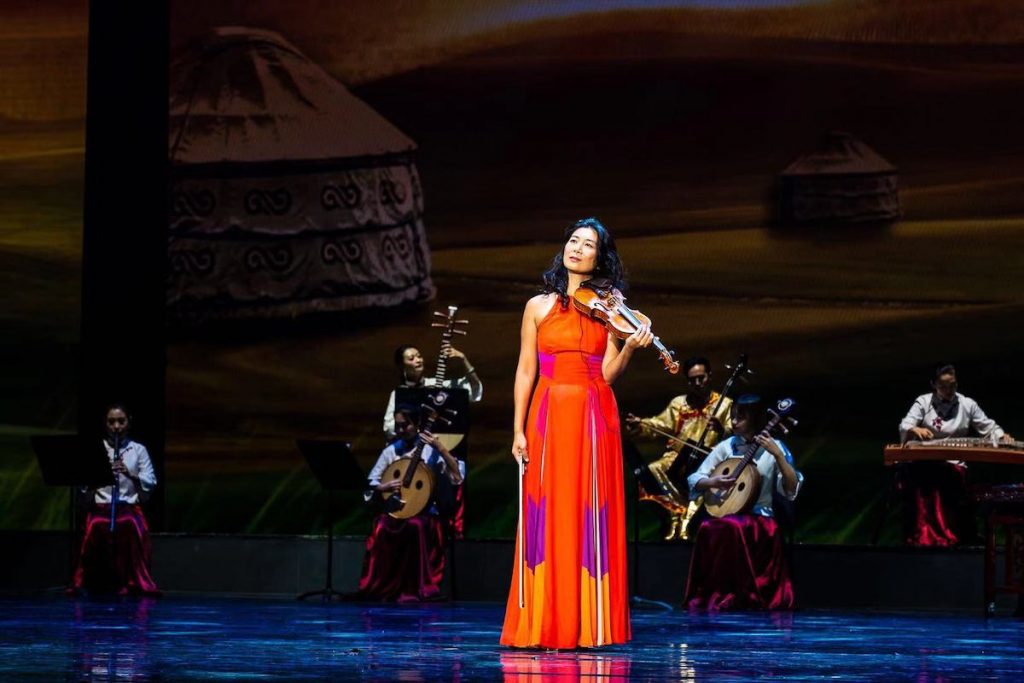 Violinist of the Monte-Carlo Philharmonic Orchestra, Zhang Zhang puts her talent at the service of humanitarian causes through her association Zhangomusiq.

From China to Canada, via the United States and Switzerland, violinist Zhang Zhang arrived to Monaco after a long journey.

“For someone who was born during the [Chinese] cultural revolution, arriving to a country like Monaco is almost a miracle! Monaco is one of the most international and welcoming countries I know, people from so many different backgrounds and nationalities living and working together in peace. It is a truly remarkable example of ‘vivre ensemble'”, she says.

If the welcome of the Principality has played an undeniable role in this journey, it is through her work and her talent that Zhang Zhang has been able to join the prestigious Monte Carlo Philharmonic Orchestra.

While still a student at the Lausanne Conservatory, Zhang Zhang answered the call to join the Orchestra, led by the famous conductor Master Marek Janowski, and to which more than 100 candidates applied.

Once accepted, Zhang Zhang thought at first she would only stay for a year. But Monaco was “much more than what you see at first sight”. Zhang Zhang discovered not only a country where she could flourish, but also a place to put down roots after years of migratory life.

“A caring, innovative, generous, culturally rich society… Everything is possible in Monaco”, the artist marvels.  It was in the Principality that Zhang Zhang realized her dream: to create an organization  that would unite the world of music with that of humanitarian work.

This is how Zhangomusiq came into being in 2007. An association which donates 100% of the proceeds from its concerts to concrete projects. Over the past 15 years, more than 70 concerts have been organized for the benefit of NGOs in more than thirty countries.

Education, ecology, humanitarian aid, diplomacy… contributing to a wide range of concrete projects.  Zhang Zhang recalls in particular a concert given in 2009 for the benefit of the Monegasque association Mission Enfance, to finance the creation of a school for little girls in Afghanistan.

“We have created schools, assisted orphanages, planted trees, provided drinking water for villages, aided the elderly… Music can serve any cause! Classical music is a language that everyone can understand”, says the violinist.

A young musician with no fortune or family in Europe, armed only with an idea, was able to realize her dream.

In addition to raising funds, Zhangomusiq’s aim is also to give visibility to lesser-known projects or NGOs. “During the concerts, people are listening. (…) Often, at the end of the concert, the audience will talk to the members of the organisation to find out more about their projects. Music is a bridge that connects people.”

For Zhang Zhang, none of this would have been possible without the Principality. “Zhangomusiq is 100% made in Monaco,” she smiles. “Thanks to the support and encouragement of the Government of Monaco and the many generous people in Monaco, a young musician, with no fortune or family, armed only with an idea, was able to realize her dream. Openness and benevolence are very much part of the Principality’s DNA.”

The artist recently performed during the 15th anniversary celebration of the Prince Albert II Foundation at the Grimaldi Forum on 29 October. It was during this ceremony that Zhang Zhang launched the ZHANGOMUSIQ Orchestra: no less than 57 artists from six European orchestras, including many soloists from the Monte-Carlo Philharmonic Orchestra, shared the stage with Robert Redford for this exceptional evening.

The mission of the ZHANGOMUSIQ Orchestra is to create and perform concerts that contribute to philanthropic, ecological and diplomatic projects, while promoting the values of the Principality.

“Classical music is a symbol of universalism”

Coming from an underprivileged family, unable to fulfill her dream of going to school like other children until she was 18, Zhang Zhang believes strongly in the value of effort: “We may not all  have the same starting point, but each of us can do something meaningful, to improve our own lives and the lives of others. Music has provided opportunities for many people. The beauty of music is that it is accessible to everyone, no matter where we come from.”

At the same time, Zhang Zhang is adamant that “classical music is for everyone! It is the most accessible and inclusive of musical cultures. There are classical music schools and orchestras in all regions of the world.”

She also encourages young people to learn music: “learning a musical instrument promotes many important qualities, such as concentration, coordination and self-confidence. It also teaches patience, resilience… Not everyone will devote their life to music, but it is very positive that music is part of everyone’s life.”

In all major orchestras, the audition takes place behind a screen, the jury does not see the artists, but only listens to the quality of their performance

Drawing on her own experience as an Asian woman musician in an European orchestra, she says: “Those who criticize European orchestras for their ‘lack of diversity’ should know that in all the major orchestras the audition takes place behind a screen. The jury does not see the artists but only listens to the quality of their performance. Artists are chosen not for their biological characteristics, such as ethnicity or gender, but only for their artistic excellence.”

The artist sums up simply, addressing the detractors of classical music: “Instead of trying to divide us, come and listen to us! Classical music is the true symbol of universalism.”

The violinist was also keen to point out that there is no gender pay gap in classical music. “In the Monte-Carlo Philharmonic Orchestra, over the last twenty years, the majority new recruits have been women. Currently, there are 12 women in principle positions. And of the four concertmaster positions, three are women”, she says.

While a fervent follower of Bach, Prokofiev and Mahler, she is also keen to explore other styles of music, she founded the group “The Zhang Zhang Band” with the jazz guitarist Leopoldo Giannola in 2001.

For more than two years, they performed weekly at the Rascasse bar, playing jazz, blues, bossa nova, rock and James Bond songs. “You know, the Chinese, when we dine, we eat many different dishes at the same time! For me, it’s the same with music. It’s the variety that’s interesting,” concludes the artist.

Zhang Zhang is adding a new arrow to her bow – or rather new strings to her violin! – a first book to be published by Edition Fayard, which will retrace her extraordinary journey, which she hopes may offer encouragement to all those who strive to shape their own destinies.