Our Top 5 games at the Cannes International Festival 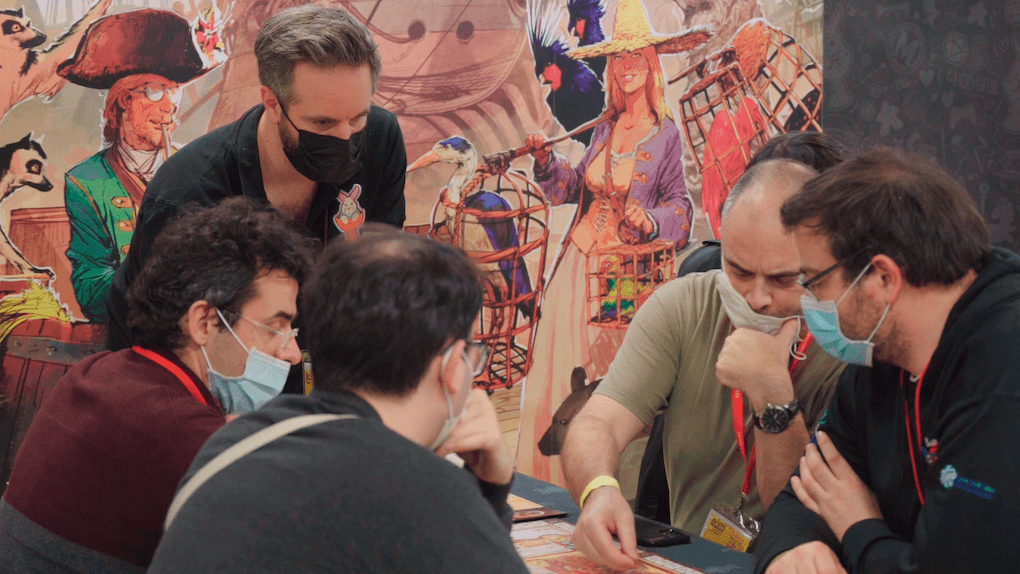 With more than 300 exhibitors from all over the world, the International Games Festival has some gems for you to discover.

The atmosphere is electric at the Palais des Festivals! From February 25 to 27, the traditional International Games Festival returns, after a year’s absence, for its 35th edition. Professionals and amateurs can now discover games for all ages and tastes. The Monaco Tribune team made a selection of its five favourites.

In the magical world of Oltrée, players can be a craftsman, a scholar, a soldier or a traveller. With the help of your fellow players, you must complete the mission assigned to you, and the mission changes with each game. A darker extension, which promises vampires, ghouls and skeletons, will also be available come May, so you can create new stories!

Thibault, from the publisher Studio H, says the cooperative and very colourful role-playing game allows you to dive into a real quest: “We embody the characters in a Patrol, in a story that unfolds as we go along. We are valiant heroes, defending widows and orphans, fighting dragons…  There’s a lot going on in the world of Oltrée!”

Fabrice, Benjamin, Guillaume, Mathieu and Jérôme, five friends who often play together, have just won the game: “It’s really cool and cooperative! There are lots of twists and turns and the storytelling is great!  There are plenty of additional actions so you don’t keep doing the same thing over and over again.”

2. Iki, the journey to the Orient

Iki’s very colourful board invites us to discover Japan during the Edo period. In the Nihonbashi district, players barter resources in the harbour to collect points and win the game!

Mathieu, from the publisher Sorry We Are French, explains the game’s theme: “We are in 17th century Tokyo. All the cards are different, they are all different professions that were around at the time, there are more than 60 of them!”

The youngest players are not left out! In the children’s area, Ambre, intern at the publisher Blue Orange, introduces us to Bubble Stories.

The principle is simple: the children must find specific characters or objects by choosing the right cards to turn over. But beware of the “Impasse” (dead end) cards. They are to be avoided if you want to be a gold explorer!

A fun game that can be played by children regardless of their reading skills: “The child always wins the game, but can still improve by drawing fewer “Impasse” cards, so there’s an incentive to start over. In fact we had two children aged four and six who came back to our stand three times so they could play again. Also, the box is very small, so it’s practical for travelling!”

4. The Lost Ruins of Narak, an uncharted island adventure

Calling all explorers: the ruins of Narak await you! You are part of an expedition, it’s up to you to find the lost artefacts by moving around the board with the help of cards and resources, confronting the fearsome guardians you will encounter!

Martin, representing the publisher Iello, feels the strength of this game lies in the graphics: “We are really in an Indiana Jones atmosphere, on an adventure in the jungle. The players’ pieces and resources are very intricate, with little archaeologists, small engraved tablets, rubies, flint heads…”

Jérôme, an experienced player, tried it out. He likes the strategy aspect: “There are a lot of combinations to work on. You start to understand the subtleties after the fourth or fifth game. There’s a very open universe for us to discover.”

We’ve all dreamed of living in a perfect city, right? With Happy City, players can build their own city of happiness over the course of the game! The goal: to manage your income, card by card, to draw people to your city and make them happy.

Mike, from Cocktail Games, gives some clues as to what you might find: “We’ve got some pretty cute and fun buildings, like a unicorn ranch or a wizard school.  It means everyone can play, everyone can build their own little town, but you also have to be tactical. It’s a very instinctive game.”

Caroline, Tania and Elodie have just started the game. The three friends were immediately won over by the visual aspect of the game: “The objets are pretty, the theme is nice, and the colours are nice and bright! We’ll be able to play this with our children.”