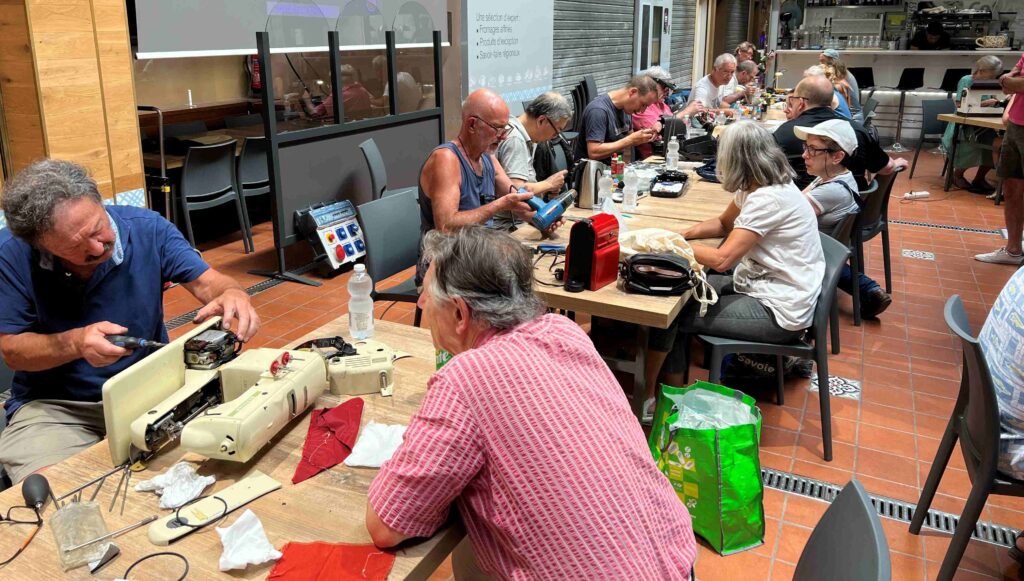 The Condamine Market halls hosted the second edition of the Munegu Repair Cafe on Saturday.

Eight of them were sat in a row in front of the tables at the La Condamine market: seven men and one woman, all members of the Repair Cafe club in Nice. And for the next three hours, they repaired all sorts of everyday objects – for free.

The first edition, on April 4, had a lot of success and this one was well attended too. People were are already queuing in the market halls, just ten minutes after the event began.

“Last time I had 40 people and I have a feeling I’ll have even more today,” smiles Brigitte, working at a table a little distance from the group.  In front of her is a sewing machine that seems to hold no secrets for her. “People come in with small tears or holes in their clothes,” she explains before resuming her discussion with her current “customer”, who came for a problem with a seam in her jacket.

On the tables behind Brigitte are vacuum cleaners, toasters, coffee makers and bedside lamps. The rule is simple: the public can only bring items they can carry. Items that will keep the do-it-yourselfers busy for a few minutes or so, so they can deal with as many people as possible.

Repair OK, but what for? “The main aim of the event is to reduce waste, to avoid putting things in the bin by giving them a second lease of life,” says Marjorie Crovetto, 2nd Deputy Mayor of Monaco, in charge of the Environment and Sustainable Development.  She is delighted to see the success of the Munegu Repair Cafe: “The next edition will be on September 10 and then the first Saturday every 2nd month”.

The pleasure of repairing

In the meantime, there is a lot of discussion and repair work going on. On one side, Marianne’s almost new coffee machine and on the other, the 3-year-old vacuum cleaner of another regular, who has been looking forward to the event for several weeks. For the two “customers”, the desire to “not throw away an item that can still work” was their reason for coming.

Sitting opposite Marianne, Jean’s expert hands work on the machine. This ‘Sunday handyman’ and member of the Nice Repair Cafe for 15 years likes the Monaco event: “We learn a lot too, and it lets us meet people and to have a nice time”.

A total of 33 people had an item repaired for free, an increase over the first edition.

If you’re curious, the next Munegu Repair Café is in September.