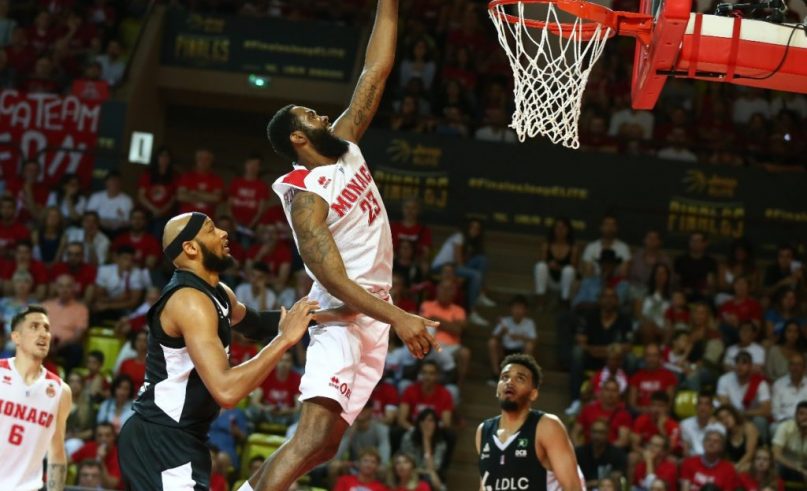 Great victory for the Roca Team last night against Asvel! Like in the last four seasons, the French championship will be decided in the fifth and final game of the series.

We knew they could. After two opening defeats at the Astroballe in the final of the French basketball championship, the Roca Team beat Asvel a second time in a row last night on the Gaston Médecin hardwood (89-81). The title will be decided between the regular season’s two best teams on Tuesday, in Villeurbanne, in a fifth and decisive game which promises to be a real battle.

In a packed house, under the hopeful eyes of Prince Albert II and the president of the Lyon-based club, Tony Parker, accompanied by his director of operations, Nicolas Batum, the game strongly resembled that of the third meeting (97-62), even though Asvel never let up. But, smothered from the tip by solid Monegasque defense and overwhelmed by the aggressiveness of Sasa Obradovic’s men, Villeurbanne never managed to find a rhythm.

Still in the race at the break (37-34) despite the meek performance from their Croatian big man Miro Bilan (2 points, 3 rebounds), the Rhodanians ended up falling behind in the third quarter where their repeated turnovers ( 23 in all!) began to weigh heavily against them.

Showing another face after the series’s first two games and undefeated at home where they registered a twelfth success in a row, the Roca Team rose to the challenge thanks to, among other things, XXL stats from Dee Bost. Already the author of 23 points in the third game, the American scored 19 points, including 4/5 from three, and with 6 assists. A high-end performance that was well-supported by that of the other Monegasque leader, Jarrod Jones, author of 15 points. The 14 points from Paul Lacombe all came in the second half, and also weighed in on the final score and was a positive sign for the French international who hadn’t displayed the finest form since the start of the series.

“I was having a hard time. In basketball, there’s no secret, when you insist on rhythm and intensity, things come back. I took a three-point shot in rhythm, maybe the first of the finals and my game came back,” he explained to the microphone of RMC Sport. “The third match did us a lot of good. We made adjustments. Now, we’re attacking their weak points and having some success. Dee Bost and I took it up a level, Yak (Ouattara) too. There is no mystery: the first two games, we were playing without intensity. We will have to recreate it one more time in Villeurbanne.”

The “wizard” Obradovic has cast his spell

Defending French champion AS Monaco, beaten last year by Le Mans in the final, has thus managed to reverse the trend. The Rocher team began the revolt at the end of the second game of the final when their coach, Sasa Obradovic, exploded in rage and was ejected. The Monegasque coach’s emotion trickled down to his players who stormed back into the game and gave Villeurbanne lots of problems into the final minutes. Did he knowingly provoke his expulsion to make his players react? The psychological dimension is indeed paramount in basketball. And it is this dimension that the “wizard” Obradovic has brought to his team since his arrival this winter. A dimension that could be essential in the decisive final game.