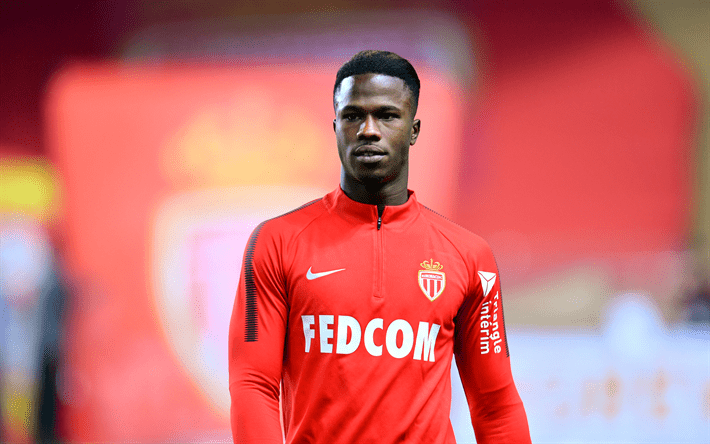 It’s no coincidence that Keita Balde’s amazing purple patch of form has come since Robert Moreno was installed as manager, for his manager clearly trusts and believes in his ability.

It must be said, Keita’s emphatically repaid the Spaniard’s faith, as he’s scored four goals and supplied one assist in Moreno’s first four games in charge. Having started only five times under former coach Leonardo Jardim, the fact Moreno’s come in and started him in all of his matches at the helm serves as testament to how highly Moreno rates him.

Keita impressively proved his worth in Monaco’s smashing 3-1 victory over Saint-Pryve Saint-Hilaire too, with his brace and quality all-round outing crucial towards the win.

Playing out on the left wing for the most part (he switched over to the right on occasion), the Senegalese international was a constant thorn in the side of the plucky minnows. To start with his goals, and his first owed much to his sharp instincts and reactions, as he responded magnificently to the rebound to punch the ball home on his left foot. Then, for his second, his smart run to get inside of Wissam Ben Yedder was key in him stroking home from close range. Also notable in his second was how his pressing, that consequently saw him regain possession high, instigated the passage that led to him scoring. Tidy finish for his second

Reading the play superbly and using his searing pace effectively, his movement ensured he got himself into many promising areas to be a threat. Posing a nuisance when embarking on runs into the box and in behind, Keita found many ways to exploit openings to be a super option. Be it via wonderful blindside runs that gave him a dynamic advantage over his more awkwardly oriented marker, clever bursts between fullback and central defender or gaining an edge when opponents were occupied with a marking assignment or caught ball watching, his opposition struggled to contain him. Fantastic run in behind Wicked blindside run in behind 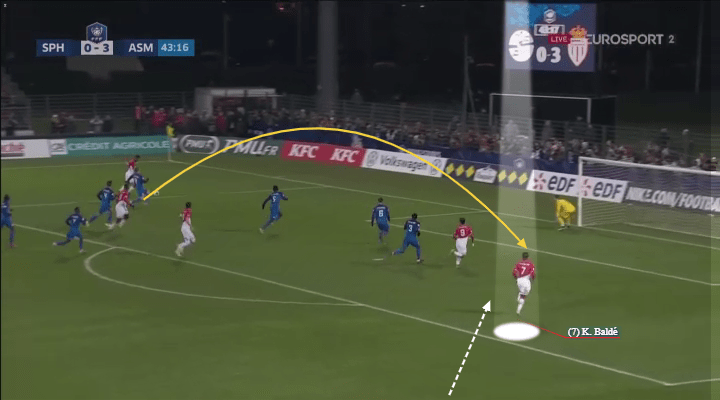 By running some brilliant routes during counter attacking scenarios to stretch the opposition, this placed huge pressure on them while also generating some ideal 3v2 overloads in the final third. 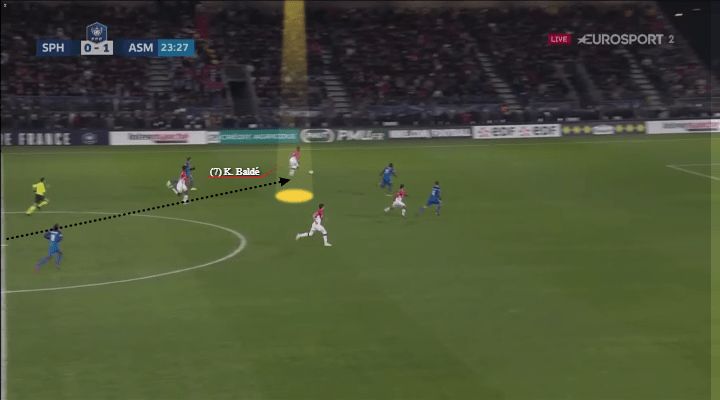 Super run on the counter as he helps forms a 3v2 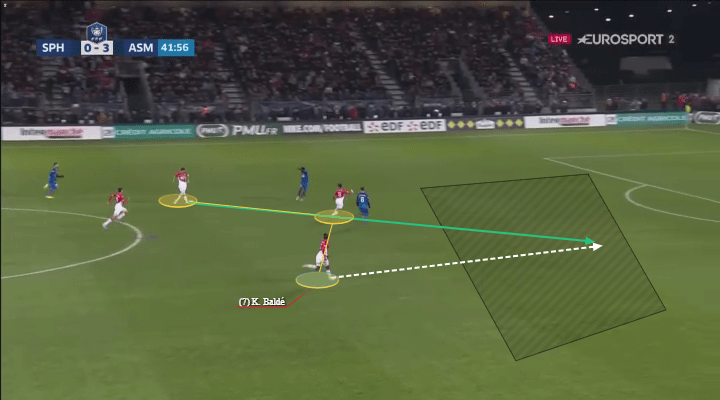 Forming a promising 3v2 in transition

Keita wasn’t solely just a weapon in behind, for he dropped deep astutely with his back to goal to connect play. Timing his drops nicely, this meant he could manufacture overloads in midfield to support Monaco’s offensive stages. Moreover, the way he found room between the lines, plus performed opposite movements, where he drew his man to create space for his fullback to exploit, duly compounded issues for their foes. 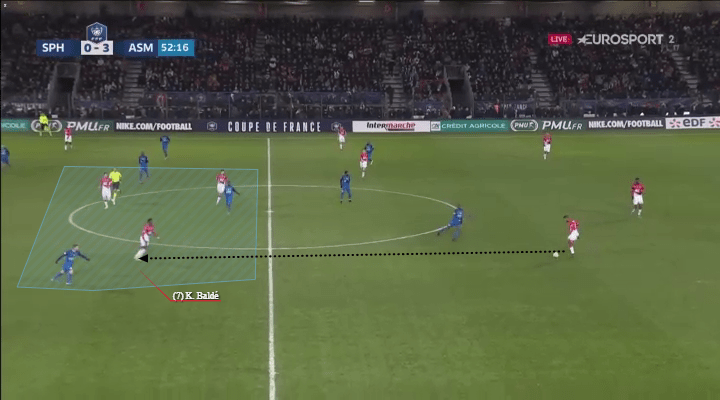 Dropping to generate a 3v2 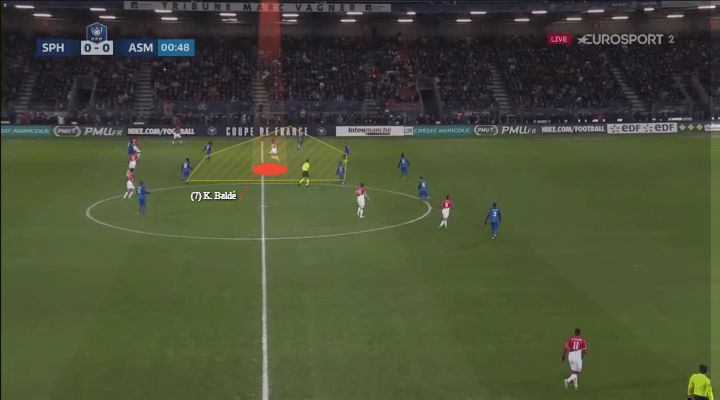 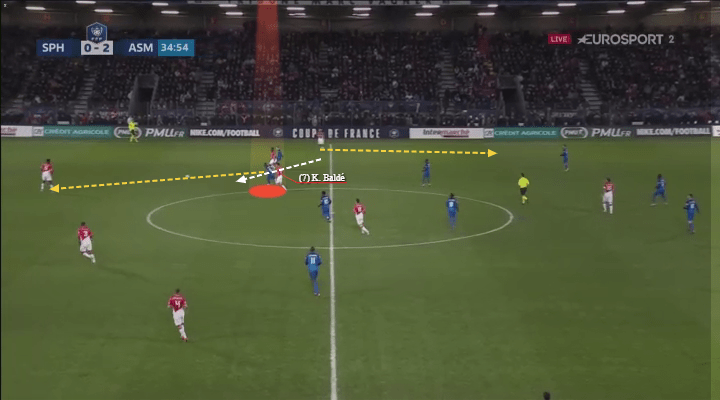 Sharp opposite movements to create space for his fullback

With the ball at his feet, the 24-year-old’s neat first touch and press resistance saw him maintain possession competently and move it on coherently when viable options presented themselves. As a result, the former Lazio whizz was able to produce some mazy forward runs using his athleticism and repertoire of skills that included some nice feints, shimmies and alterations in pace and direction.

When it came to his passing, the fact he completed 34 of his 39 attempted passes at 87% was very promising indeed considering what high pressure areas he operates in, with his back to goal layoffs and vertical passing especially notable. Very underrated in aerial confrontations, Keita’s quality in this area was plain to see, for his judgement and leap saw him win some vital headers to flick the ball on to the coordinated runs of his teammates. His aptitude here also saw him act as a superb target if Monaco couldn’t bypass the press with their preferred ground passing. Great leap and headed flick on to set free Dias

Set to be an integral component within Moreno’s framework, another significant element that will help him is that he speaks Spanish, which he learned during his time at Barcelona’s famed youth academy, La Masia, in his formative years.

When speaking on his purple patch of form, Keita gave a refreshingly honest assessment, saying: “I returned to Monaco to play an important role after my experience at Inter Milan. Before I was playing less, but the important thing is to make a difference when you are on the pitch and to enjoy it as well. There is no secret, it is only work that has paid off and self-confidence.”

With Monaco setting their sights on the top three and Champions League qualification, the rejuvenated Keita will be a huge weapon for the club in their quest to do so, as he’ll be doing everything in his power to help achieve this attainable goal.