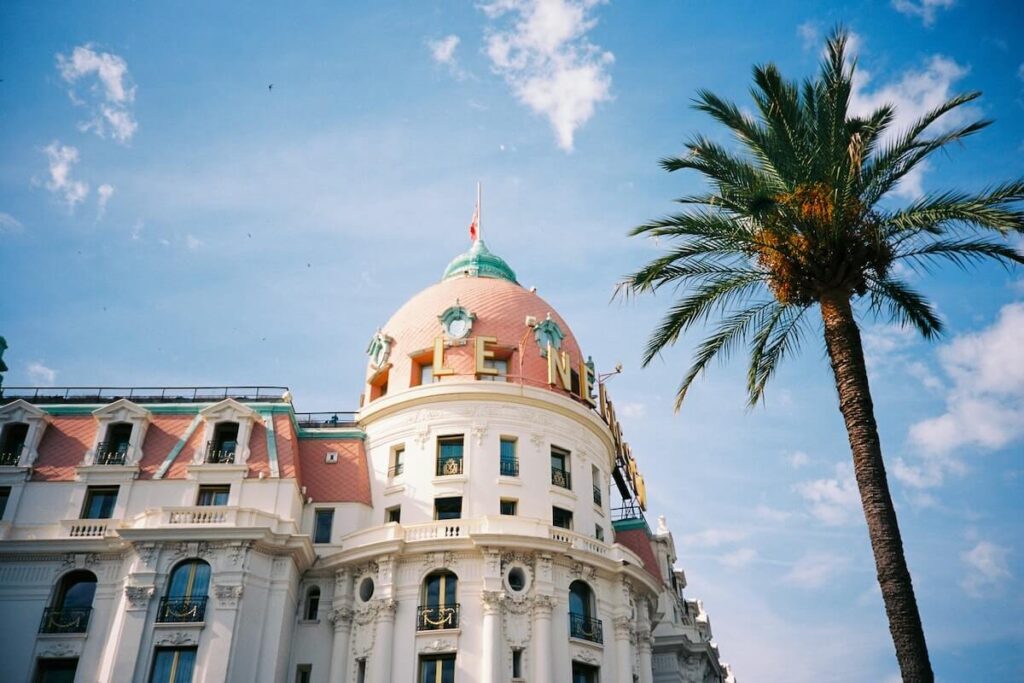 It is perhaps difficult to imagine that protecting the environment could be a priority for the world of luxury. After all, luxury is more synonymous with excess than it is with sustainability. And yet, some of the most exclusive hotels on the French Riviera have decided to embrace eco-friendly measures, as they recruit specialised consultants in hope of receiving sustainability awards.  But is sustainable luxury tourism truly a match made in heaven, or are these efforts bound to be short-lived?

On 5 January 2020, Mathieu Merlet arrived at the Negresco. The exclusive hotel located on Nice’s Promenade des Anglais had appointed him as its first ever food quality engineer. Merlet’s expertise? Helping hotels reduce their environmental footprint. Hélène Séropian, head of Media and Communications at the Negresco remembers his arrival. “The first time we offered an organic menu, people thought we were weirdos!” she recalls.

Since that first organic menu, many other steps have been taken thanks to the hotel’s sustainability policy. “The aim is to reduce the hotel’s carbon footprint, to protect biodiversity, and we are very careful about the origin of the products we use,” explains Mathieu Merlet.

The Negresco’s sustainability measures are broad ranging: the hotel has 100% renewable electricity, tries to limit deliveries, uses a range of biodegradable cleaning products and relies as much as possible on local producers. “In the rooms, guests are encouraged to participate in our effort. For example, we’ve replaced individual miniatures with dispensers. It is not always easy for guests to accept this change, so the hotel explains its approach through the use of signposts,” Merlet comments.

We’re always striving to better ourselves

The coronavirus pandemic too helped make the hotel more sustainable. “Information (ed: such as restaurant menus) is now accessed through QR codes, which drastically reduced our use of printing and therefore cuts down our consumption of paper, ink, electricity and of course also prevents the virus from propagating. Rooms are disinfected with a dry-vapour device. We’re always striving to better ourselves,” explains Merlet.

Indeed, the Negresco has several other projects on the cards, such as focusing on regional businesses and locally sourced products, reducing its use of final waste (i.e. waste that cannot be reused or repurposed) and going plastic-free. The hotel also wants to raise awareness amongst its suppliers about sustainability and is planning on introducing a wooden room card.

The Negresco hopes that these efforts will result in an international hospitality label. The institution was awarded the “Entreprise du Patrimoine Vivant” in 2015, a label given out by the French state to recognise outstanding business, as well as the Eco-label in 2014. The latter is a European certification which only a handful of French 5-star hotels can boast of having.

The Negresco’s efforts have been praised by environmental activists, yet a lot remains to be done. Thierry Bitouzé, co-founder of the regional citizens’ initiative (collectif citoyens 06), explains that the situation is a little more complicated. “The actions are good of course, but it is tourism in general that we must question,” he says. The group has confronted Nice’s representatives about the city’s environmental policy.

Elected officials are in fact planning the construction of “five or six new luxury hotels in Nice”, Thierry Bitouzé tells us, as well as the expansion of Nice airport, which could lead to a 50% increase in air traffic. “The (good) individual actions of luxury hotels will not unfortunately be able to counterbalance the negative effects that these projects will have on the environment,” explains Thierry Bitouzé.

In the south of France, as everywhere else in the world, the pandemic has been food for thought. Coronavirus has turned the tourist industry in the French Riviera upside down, prompting a first conversation about the sustainability of its economy. Tourism in Provence-Alpes-Côte-d’Azur represents 13% of the regional GDP, 82,000 jobs depend on it in low season, and the numbers go up to 143,000 in summer.

Tourism in our region is a main activity, and the crisis has brought it down

Luxury tourism answers for much of those numbers: in 2018, according to a report by the region’s tourism committee, 33% of the 23 million overnight stays were in 4- or 5-star hotels.

This year’s tough tourist season has left the economy of the Côte d’Azur in shambles. Thierry Bitouzé thinks the moment has come to change things up. “Tourism in our region is a main activity, and the crisis has brought it down. We should diversify our economy, so that the region does not rely solely on tourism. For example, the photovoltaic industry is almost non-existent in the Riviera, even though we are the sunniest region in France,” he says.

In a city like Nice where 500 people die every year due to pollution, rethinking the town’s tourist and environmental policies, as has been done by other European cities, including Amsterdam, Barcelona and Venice, is of paramount importance for the region’s citizen’s initiative.

For Thierry Bitouzé, “any action is a good action, whether it is a small change or a big political decision”. “Today, however, politicians are turning their back on us, as well as on future generations,” he admits.