Monaco’s player ratings from their tremendous derby triumph over Nice 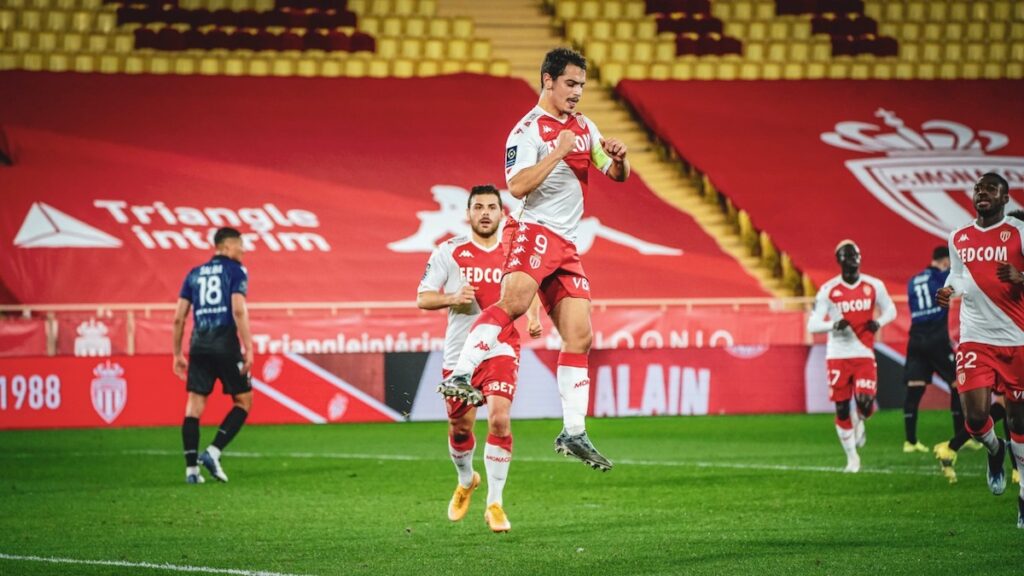 AS Monaco ousted OGC Nice in a thrilling derby to extend their scintillating winning run to six matches. Here are our player ratings from the match.

Benjamin Lecomte (6.5): While he couldn’t do much to prevent Pierre Lees-Melou’s goal, Lecomte was effective in goal, making one especially fine save to deny Jeff-Reine Adelaide. Struck some outstanding long, medium and short range passes to kickstart many Monaco moves out from the back.

Caio Henrique (7): Unfortunate slip proved the catalyst for Nice’s goal, but other than that, his defensive work was sound. Stretched the opposition horizontally with his wide positioning in attack to open up space for Sofiane Diop. Embarked on some nifty runs, including the one that ensured he won the penalty that Wissam Ben Yedder converted. Crisp passing was beneficial in linking play.

Benoit Badiashile (7): Polished in his defensive work, as he continued his good form. Brilliant passing and energetic ball carrying were highlights going forward. Disappointingly suffered an injury and to be substituted at half time. Replaced by Axel Disasi.

Djibril Sidibe (7): Handed another start by Niko Kovac, Sidibe didn’t let his manager down by being effective both defensively and offensively. Chimed in with some super interventions on his way to limiting the dangerous Amine Gouiri’s impact. Also struck some crafty set pieces.

Guillermo Maripan (7):  Did a fine job nullifying Nice’s star forward in Kasper Dolberg by aggressively marking him and physically imposing himself on the Dane. Despite not scoring in this one, he was a commanding and authoritative presence at the back for Monaco.

Aurelien Tchouameni (8): Confident and composed with the ball at his feet as usual, with the youngster dictated play masterfully. Moved the ball quickly and with incision, as he set up some quality chances and switched the play beautifully. Broke up play and read danger swiftly to regain possession on many occasions.

Youssouf Fofana (7): Helped keep things ticking over in midfield with his tidy distribution and smart positioning. His delightful lofted pass to Caio prior to him winning the penalty was a joy to watch. Pressed proactively and applied many timely interventions to stop many Nice attacks dead in their tracks.

Sofiane Diop (7.5): Shone again for Monaco, with his electric dribbling, intelligent movement and amazing work ethic vital towards the win. So fast, balanced and skillful, Nice struggled to stop his wizardry in possession. His intense pressure and dogged defensive work was a big plus too. Replaced by Fode Ballo-Toure.

Krepin Diatta (5.5): Tireless in his defensive duties, Diatta harried his foes and tracked back robustly to support his backline. Still yet to hit his straps, but his tremendous talent was evident on a few occasions. Replaced by Ruben Aguilar.

Kevin Volland (6): Could only produce flickers of his best, in a match where he didn’t operate at his best level. Upside could be found in his smart movement between the lines, back to goal play and his smart assist for Ben Yedder’ sensational second goal, though. Replaced by Stevan Jovetic.

Wissam Ben Yedder (9): Scored a classy penalty before firing home one of the goals of the season courtesy of his venomous drive from distance. Excelled with some terrific touches and dribbles to outfox markers. Timed his runs superbly into the box to offer an outlet for his colleagues. Lead from the front with his relentless pressing, which caused many turnovers in advanced areas. The inspirational captain was a real difference maker on the night right when his team needed him. Replaced by Aleksandr Golovin.