War in Ukraine: How are the Monegasque clubs reacting? 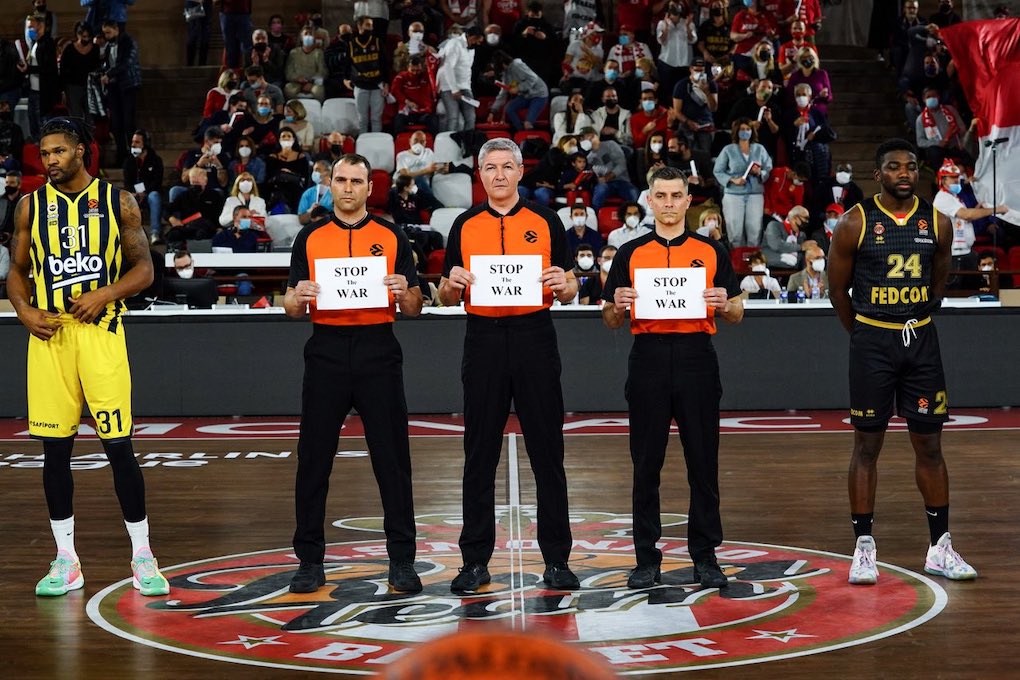 AS Monaco and the Roca Team were keen to react to the conflict between Russia and Ukraine.

Owned by Russian presidents, both AS Monaco and AS Monaco Basket have been in the news since the Russian army invaded Ukraine on 23 February.

After a decade that saw the Ukrainian Sergey Dyadechko structure the club and elevate it to European status, the Russian Aleksey Fedoricsev has been at the club’s helm since January. He attended Monaco’s 92-78 Euroleague win over Fenerbahçe, alongside Sergey Dyadechko.

While neither of the two men have chosen to make official statements, the former player and now assistant coach of the Roca Team, Sergiy Gladyr, showed the message ‘Stop war’ on his tactic board during the last Euroleague match.

A post shared by AS Monaco Basket 🏀🇲🇨 (@asmonaco_basket)

In an interview with Spanish newspaper Marca, Sergiy Gladyr said he was “worried” and “scared” by the war. “I still don’t know what to decide,” he said, with part of his family still in southern Ukraine. “My wife and two children are here in France, it’s very complicated.  I hope this situation will be over soon.”

Aleksey Fedoricsev (aged 66) is the founder of Fedcom, the world leader in sulphur and fertilisers, with an estimated personal fortune of $1 billion. The company is well known in the Principality, having been the shirt sponsor for AS Monaco footballers for nearly 25 years.

Aleksey Fedoricsev stopped sponsoring ASM in June 2021, except on the shirts worn this season in the European Cup, when he took over AS Monaco Basket. Ranked as the 100th largest Russian fortune, the businessman bought almost half of the basketball section’s shares to become its president. Sergey Dyadechko remained vice-president.

On the AS Monaco football side, kick-off of the Ligue 1 match against Stade de Reims was delayed, in order to protest against Russian “acts of war” in Ukraine, at the behest of the Reims club’s president, Jean-Pierre Caillot, who advocated a “symbolic” gesture. Scheduled for 1 p.m., the kick-off took place at 1:05 p.m.

“Despite all the respect I have for the Monaco club and its management, we felt we had to symbolically show that we were in total disagreement with the acts of war perpetrated by Russia over there”, the Stade de Reims President explained to Prime Video before the match. Asked about the stance at a press conference after the match, ASM coach Philippe Clement stated that there was “not one man in the whole club who wants war.”

The club’s Vice President and CEO, Oleg Petrov, also wanted to react. “It is obviously a difficult and very painful situation, which we are monitoring closely. As a football club executive, I think that the arena we feel is most suitable for a confrontation is the sports arena. I hope peace will come as soon as possible.”

SEE ALSO: Three questions on the Russian-Ukrainian conflict and Monaco

Oleg Petrov was present at the match alongside Prince Albert II and his children, as well as Ekaterina Sartori Rybolovleva, the AS Monaco president’s daughter, and Juan Sartori, his son-in-law, appointed vice-president of ASM in November.

According to French sports newspaper L’Equipe, Dmitry Rybolovlev has never been close to Vladimir Putin. Testament to this is the fact the president of AS Monaco since 2011 left his country in 2010, encouraging his parents to do the same and follow him to the Principality.

This information is confirmed by journalist Lazar Van Parijs, editor at Footballski.fr,  which specialises in football in Eastern Europe. “Compared to Roman Abramovich (Chelsea FC president), Dmitry Rybolovlev is far from being close to Vladimir Putin. He left Russia in 2010 and was more or less forced to sell up. When he left Russia, he wasn’t really in the good graces. That was when he arrived in Monaco, with a huge amount of money that he wanted to invest in the Principality to buy peace and security.“

In Europe, the Russian executive is not impacted by sanctions at present.  And according to Lazar Van Parijs, even if the situation is necessarily “quite complex”, there is for the moment “little reason to want to go after Dmitry Rybolovlev.”