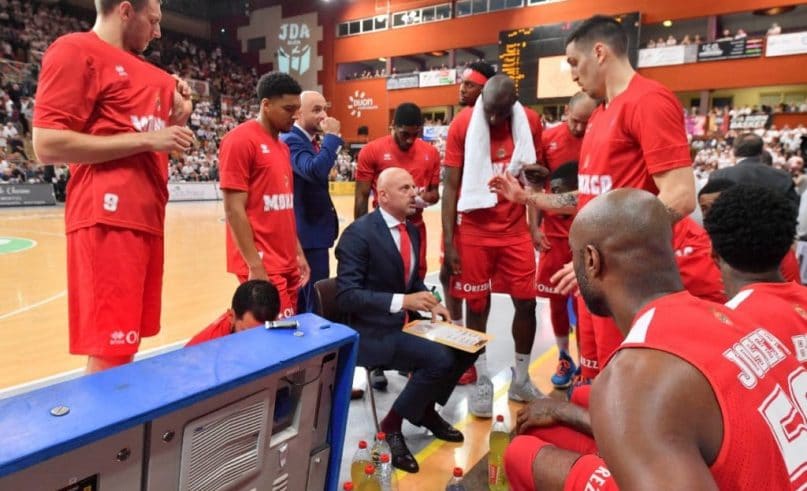 On the eve of the first match of the final of the French Basketball Championship, Monaco’s coach Sasa Obradovic shared some of his thoughts before the decisive encounter.

Since he took over the team in mid-February, the Roca Team has been practically unbeatable. Under the orders of the Slovenian Sasa Filipovski, the Monegasque team had five wins and seven defeats in 12 days of play. With Obradovic, the side returned to second place in the regular season standings, linking up 17 wins in 18 games of Jeep Elite play. A record.

Thanks to their newly found aggressive, fast, defensively staunch style, the Roca Team qualified for the plays-offs despite a complicated start to the season. In the quarterfinals, the Monegasques left no chance to Limougeauds, defeating them in the first leg (93-73) and punished them further in the second (90-62) in one-sided matches. Ditto for the semi-final against Dijon. Winner in extra time in the first game of the series (82-77), the Monegasques took the next two meetups to sweep the series 3-0 (84-75 at home and 81-78 away).

For the second consecutive year, the Roca Team is preparing to play the Jeep Elite final against ASVEL, first place finisher’s in the season standings, in a five-game series, the first round of which will take place tomorrow night, on the floor of the Astroballe in Pau.

For him, the team’s preparation must remain the same in order to release to the maximum amount of pressure inherent to this kind of circumstance. Although there is no question of changing some habits, Obradovic insists particularly on the necessary and singular focus that must permeate the whole club. It is even, he says, “the most important thing we are trying to put in place, the focus on the means of execution.”

Confident and assertive, the Serbian coach defends his team as being the favorite: “ASVEL,” he noted, “has a very good coach, among the best players in France, with Euroleague experience. They have solid rotations and great basketball knowledge of at the highest possible level.” He knows this team well and especially his coach, his compatriot Zvezdan Mitrovic: “We are good friends, we have a good relationship, every time we see each other after a match we exchange on plenty of things. We are more or less of the same school, with the same way of seeing basketball. After that, everyone is different, with their own journey, their particularities.”

He also hopes for fair refereeing, as the decisions of the referee can tip a match in one direction or another: “What I also want in this final is that it is the players who decide the fate of the games” … Thanks, for example, to offensive rebounds, one of the Monegasques strong points? “We worked a lot on this aspect of the game,” he admits. Because if “one can not predict everything that will happen in a match, there are some very important aspects that can be the key to success.”

If Monaco wins this final, Obradovic will be champion in three different countries, having already won the championship in Germany and Russia. A track record that commands respect, but coach Obradovic modestly mentioned: “Great players make great coaches, I am especially proud of my players here in Monaco, and the sacrifices they will make to win.”

Good luck to all!