Oleg Petrov comments on AS Monaco’s ambitious plans to rebuild At the close of this 2018-2019 Ligue 1 season, AS Monaco has narrowly escaped relegation by finishing a lowly 17th. This is a far cry from the team that hoisted the league trophy just two seasons ago, and certainly not what fan’s of the Monegasque side expected. After a mid-season shakeup that witnessed the departure of new coach Thierry Henry and the return of former coach Leonardo Jardim as well as the replacement of Vice President Vadim Vasilyev by newcomer Oleg Petrov. This wave of change was also accompanied by the arrival of a host of new talents, such as Cesc Fabregas, during the winter mercato, all in the hopes of salvaging the season for the embattled side who trudged through the first half of the year with a slew of injured players (up to 14 at one point), many of them starters.

Looking back on this season that is indeed worth forgetting, and looking forward to the future, Vice President Petrov addressed a handful of subjects related to the club in a recent interview with Monaco Matin, with a special focus on the upcoming summer mercato.

Mr. Petrov first commented on the catastrophic results of the 2018-19 campaign:

“Indeed, it was a very bad season. I think it was a combination of things. First of all, this is not Monaco’s place considering the talent we had on this team. We made a number of mistakes this season, and the president reported on them in January when we recalled Leonardo Jardim.

We made many readjustments, changing head coaches twice. I think we should not neglect the physical aspect of the team. We had many players at the World Cup, it takes a lot of effort especially since the club was coming out of several seasons of more than 60 matches and many internationals arrived at the World Cup exhausted and returned to Monaco, not at their top form. All of this together can explain this failed season.”

Then, he went on to comment on some of the season’s positive takeaways:

In such a situation, the club could really have been weakened. Today, we know that more needs to be done to build the roster. We will be very attentive to that. I know that the club has often shown its know-how in its ability to sell its players very well but we have learned a lot from that because it is essential to keep a good, strong side. It’s very important, we need to be more careful.”

He followed this vision of the future with comments on Leonardo Jardim’s role with the team:

“We believe he can lead the team to our goals, he has already done so.

He is a great professional. He is very respectful, attentive. We exchanged on his needs. I know the players he needs and at what position. It is a delicate job because it is not only a question of choosing the right players, it is also important to make them play together. It is a delicate blend that requires a lot of work. Some players adapt quickly, others less so.

[Leonardo’s] perspective is very important for the upcoming transfer window.”

Mr. Petrov then delivered thoughts on the club’s goal’s in the upcoming season and beyond:

“I think the essence of the club is not going to change because the club has to sell and buy players and cannot count on millions of fans to generate ticket revenue for example. Next season, sports results will be our top priority. We have to finish in the top three and play in the Champions League the season after. But, obviously, our project continues, we will develop young talents while maintaining our sporting position. We cannot afford to be at the bottom of the rankings.”

It is a risky task but we are capable of it. We still have a very good team despite the season we have just endured. We would be very disappointed not to finish on the podium. If we fight together and the team runs well but we finish fourth, it will not be a tragedy and we will not be disappointed. The Champions League is the goal, yes, but it’s not the only one. We need to improve the squad, especially with players with a conquering spirit, with an appetite for victory, not necessarily young players but boys who have already proven themselves in France or elsewhere. We want players who are hungry, who are not satiated by success. We are looking for a certain state of mind.

It depends on the profiles and their position in the field. We are an attractive club despite everything. The important thing is not to know how many millions we will devote to the mercato but rather to exactly target the profiles we need.”

Oleg Petrov and Dmitry Rybolovlev at the helm

Because of the importance of this next transfer window, it is Oleg Petrov and Dmitry Rybolovlev who personally manage all contact with strategically important players. “I and Dmitry Rybolovlev, given the importance of this next transfer window will handle incoming and outgoing players, but it will be mainly me. Michael Emenalo is our sports director, he has many missions such as scouting, youth management, medical department, etc. I’m not scared or excited, I’m mostly very focused, prepared too, I know it’s a stressful mission, but I’m mentally and physically ready,” he says. “A lot of movement, it’s going to depend on the starts too, we’ll buy some players to improve the level at some positions, others to replace departures, others to bring in a competitive spirit. It is all meant to strengthen the team.”

Time will tell whether Mr. Petrov can indeed beat the summer heat and bring in all the tools AS Monaco will need to climb back to its former glory at the top of the table. All eyes on the summer mercato! 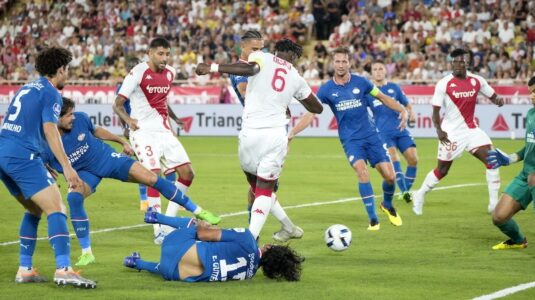