Pierre Soulages in Nice: seeking light beyond the black 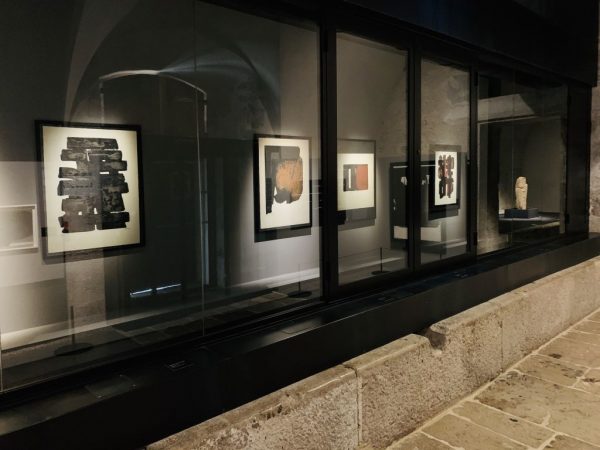 In the port of Nice, within the l’Espace culturel Lympia, the exhibition “Pierre Soulages: the creative power” offers a retrospective of the prolific century-old artist and his self-professed “Beyond-Black” works.

To celebrate the artist’s 100th birthday, the Alpes-Maritimes Council is showcasing around one hundred of his works, accompanied by accounts from friends and family, enabling visitors to better understand the path down which his rich life has gone.

Most notable for his style of “Outrenoir” (or “Beyond-Black”), Soulages and his works may seem difficult for the general public to understand. “I do not depict. I do not describe. I do not represent. I paint, I present.”

This bold statement of Soulages welcomes the visitor at the start of the exhibition. The quote is reminiscent of some kind of personal mantra, perhaps resulting from his desire to break with artistic academism. One will struggle to find this classical figurative vision among the 1,700 or so paintings by the artist: Soulages’ sole subject are instead trees, inspired by the landscape of his native region, the Aveyron.

Born in 1919 in Rodez, southwest France, Pierre Soulages developed his attraction to the visual at a fairly young age, but for some time preferred the pen to the paintbrush. He refused to go to Beaux-Arts in Paris, a grand institution of the fine arts, as his disdain for theory was only matched by his fascination for gesture, matter and tools of a painter.

His compositions are never exact representations. Moreover, none of his paintings bear a signature. Soulages does not want to force the viewer to look at a scene, but prefers that they examine the forms and reflections of light caused by the textures he creates. The famous “Outrenoir” is not merely black, but a gateway to a world beyond this one. Its key? Light.

“These paintings were first called Noir-Lumière (“Black-Light”), creating a form of light inseparable from the black that reflects it. To avoid limiting them to an optical illusion, I thought up the word Beyond-Black, a light transformed by the colour black. And, just as outre-Rhin and outre-Manche define another country in French (Germany and the United Kingdom respectively), Beyond-Black also defines another country, another mental field other than that of simple black.”

Soulages’ painting is not abstract but rhythmic, and everyone can discover what they want in it. A memory, a dance, a face, an emotion. Each painting in the exhibition is unique, as it is constantly renewed by the visitor’s gaze. You won’t see the same brilliance, whether you are on the right, on the left or crouching under the frame, because of the light that goes over the surface and edges. In this, a Soulages painting is indeed an experience in itself.

Passing through the exhibition, one also discovers silkscreen prints, lithographs and the mysterious “etchings” where Soulages works on copper plates before dipping them in acid. The works on paper allow us to admire a different side of the artist, so strongly attached to the colour black that we ignore his use of other shades, such as blue, ochre or bronze.

His use of black superimposed on white backgrounds stands out in the exhibition, black printing on white backgrounds that reminds us of an imaginary alphabet, a language straight out of Soulages’ mind. Almost everywhere, between the frames, on the walls, we find the words of Léopold Sédar Senghor, whose artist participated in the illustration of the collection of “Élégies majeures”. He writes of his friend, “Pierre Soulages is a pure painter, a poet.”

It is certainly creative power that jumps out at us throughout this journey between deep blacks and muddy angles. L’Espace Lympia draws us into his personality, of a man who allows each spectator to define or conceptualise it for themselves. Soulages does not belong to a movement; he embodies the movement, and gives it its most base meaning. Pierre’s art is consumed without hesitation from the exhibit’s visitors.

As for Marlène Poppi, Cultural Projects Manager at l’Espace Lympia: “He is an artist who touches everyone, and challenges you all the more when stood in front of a Beyond-Black. I think that for people who know nothing about art, this is an excellent introduction. It’s not complicated to understand Pierre Soulages.”