AS Monaco: Moreno-Mitchell-Petrov, a winning trio? 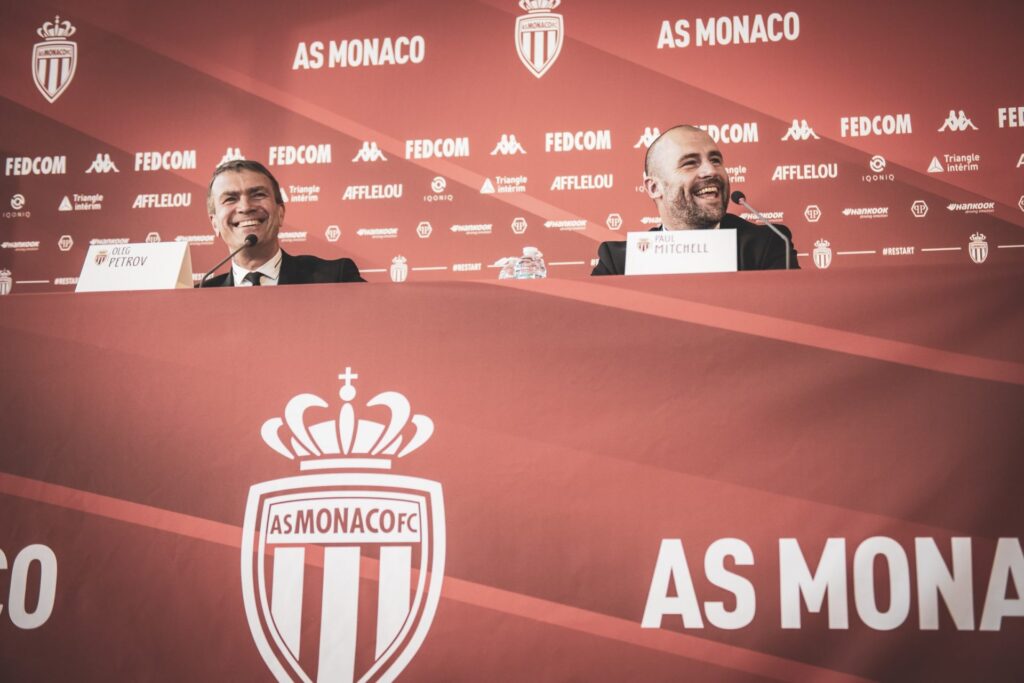 During a press conference held in the Rainier III Auditorium to introduce AS Monaco’s new sporting director, Oleg Petrov, Paul Mitchell and Robert Moreno took turns in articulating their ambitions for the 2020-2021 season. Project, strategy, recruitment, the new strong ASM trio have a clear objective — to write a new page and put AS Monaco back on the right track after a disappointing season ended in seventeenth place.

They were all smiling. Tanned complexions, perfectly fitting suits for Oleg Petrov and Paul Mitchell, a fitted polo shirt for Robert Moreno. During a press conference held on Monday afternoon in the Rainier III Auditorium, with its breathtaking panorama behind its large bay windows overlooking Port Hercules, the Vice President, the new sporting director and the coach of AS Monaco spoke at length about ASM’s new ambitions. At the dawn of a new season that looks to be promising, built on this new trio determined to turn a page, the Principality’s club seems to have given itself the means to erase from memory a disappointing 2019-2020 season. “We want to bring AS Monaco back to where they belong at the top,” said Oleg Petrov, who is convinced he has found the missing piece of the puzzle in Paul Mitchell. “I believe Paul has all the skills to make this project a success. I am convinced he will be able to bring his energy to help us modernise and deliver some victories to our supporters. With Paul, the objectives were clearly laid out: to strengthen the team, to have the best sporting results and to develop our structures. This is what he has always achieved in his career. He will also help the development of Cercle Brugge, working on the playing philosophy of both teams.”

As with Leipzig, I sense a strong ambition here

Director of Red Bull strategy before his arrival on the Rock this summer, Paul Mitchell “didn’t hesitate for a single second” when the project here in Monaco, led by Oleg Petrov, presented itself to him. “I am an ambitious person, my career can attest to that. I work in a modern way. I have always liked dynamic players who are aggressive in the game and who have a winning-orientated culture. I will try to bring that and bring a clear synergy between AS Monaco and Cercle Brugge. As with Leipzig, I sense a strong ambition here. We have a plan, but we also need to be patient.” Before the transfer market opens and it becomes time to strengthen the squad that performed less than convincingly last year, the downsizing of the team is set to be one of the first issues negotiated, a priority since he arrived in Monaco. “We agree that the list of players under contract is long, there are sixty-one at the moment,” said the ASM Vice President. “It’s gradually going down. We need to give the team new energy.” It should be a positive shift in the right direction set in motion by Robert Moreno, who arrived during last year’s season. He will finally be able to take advantage of a full and exceptionally long pre-season (eight weeks in total) before the championship resumes.

Wissam Ben Yedder? Of course I want him to stay! For his quality on the pitch and his professionalism.

“Paul and I have had about 15 meetings since his arrival. We talk every day. It’s the normal relationship that a coach of a team should have with his sporting director,” says the Monaco club’s coach. “I’m happy to have the opportunity to work with Paul. We need to have this structure to be a successful team.” In order to achieve that, AS Monaco will also need to keep its best players, starting with French international Wissam Ben Yedder, who was co-top scorer in Ligue 1 last season with Kylian Mbappé (18 goals). “If I had guarantees about the squad and whether Wissam Ben Yedder would stay? Of course I want him to stay,” said Robert Moreno. “For his quality on the pitch and his professionalism. If he leaves, I want one or two players like Wissam (smiling).” While recruitment could be late this year due to Covid-19, the ASM coach has unveiled a recovery programme. “In conjunction with the medical staff, we have decided to have five phases in the pre-season. This week it’s time for everyone to get their fitness back up. We will then have two weeks in Monaco for pre-season work before leaving for a ten-day training camp in Poland. We’ll have two games and then three in Poland, which means five games of preparation. During the camp, we will give the players more information and what we expect from them.” It seems the revolution is indeed underway.