“If we survive the Holocaust, I’ll buy you a house.” The story of the villa painted by Cocteau 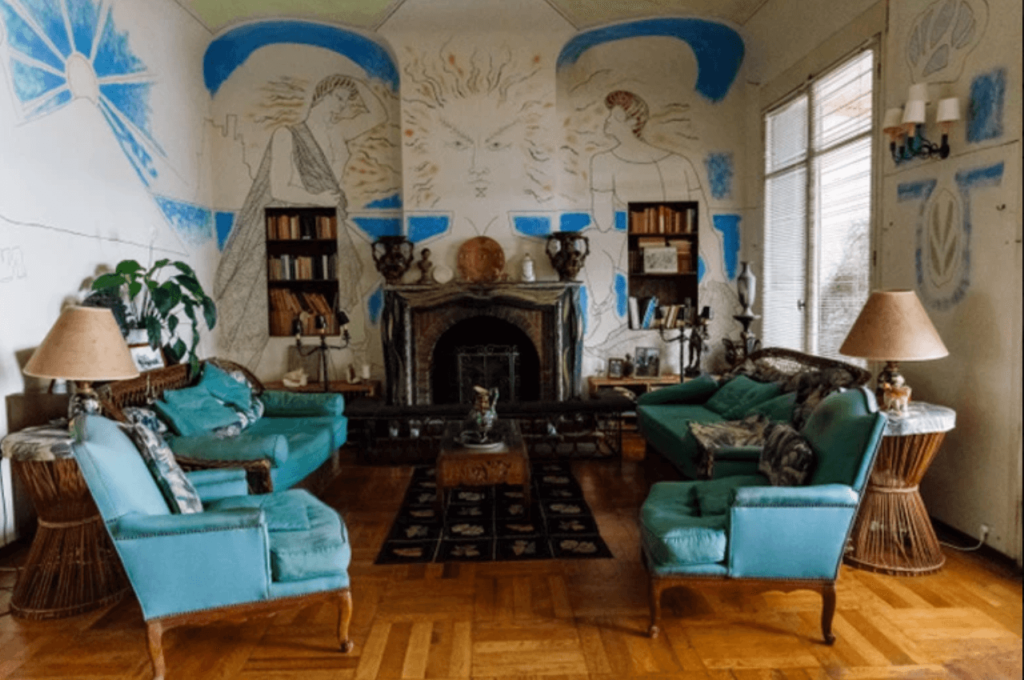 In that part of France where luxury lounges all year round, there is a white house which calls itself the villa of sighs.

For all the glamour of the Côte d’Azur, where modesty is almost frowned upon, Villa Santo Sospir is rather discreet. Nestled in a grove at the utmost point of Saint-Jean-Cap-Ferrat, Mediterranean plants climb its otherwise bare flanks towards the roof of terracotta tiles. Yet, simplicity deceives. Behind the bare walls hides a masterpiece of 20th century Western art: the inside of the villa is entirely painted by French artist, poet, author and filmmaker, Jean Cocteau.

“If we survive the Holocaust, I’ll buy you a house”

“If we survive the Holocaust, I’ll buy you a house,” Jewish-American banker Alec Weisweiller allegedly told his wife Francine during the Nazi occupation of France. And when they did survive, true to his words, he bought her Villa Santo Sospir – named after the Italian word for ‘sigh’. It was in 1950 that Cocteau first came to the villa as a guest. By this point, Alec and Francine Weisweiller were no longer living together. Alec lived in Paris with his mistress and Francine spent her time in the south of France. She had met Cocteau during the shooting of “The Strange Ones” (“Les Enfants Terribles”), Jean-Pierre Melville’s adaptation of Cocteau’s novel. The artist’s stay became the first of many, and throughout the 50s, Cocteau was somewhat of a permanent guest at the villa.

Cocteau could not stand the bareness of the villa’s walls. One day, he asked Francine if he could draw the head of Apollo above the fireplace in the living room. She agreed. And so, he did.

“Matisse told me: “when you dress up a wall, you will dress up the other ones too.” He was right,” explains Cocteau in a 35-minute-long montage film he made about Villa Santo Sospir. Indeed, a lonely Apollo had soon turned into a pantheon of gods and demi-gods. There is the bedroom with Narcissus, and Eco repeating his name, written in red letters on the wall; the room where Actaeon is transformed into a deer by Diana who caught him looking at her while she bathed; the wall where Dionysus sleeps after an afternoon of drinking.

And when he tired of myths, Cocteau brought to life the villa’s own setting. Scattered amongst the Gods are the prosaic silhouettes of the Côte d’Azur:  sea urchins, birds, fougasse (a type of bread made in Nice), and the fishermen from nearby Villefranche, whom Cocteau calls in his film “the sun’s priests”.

The artist was particularly fond of Villefranche and of its fishermen. After Villa Santo Sospir, he also painted the Saint-Pierre chapel in Villefranche, which is nicknamed “the fishermen’s chapel” because used as a storage space for fishing nets.

Cocteau insists that he did not paint the house. “Santo Sospir is a tattooed villa,” he claims, “I did not have to dress the walls, I had to paint on their skin”. He was assisted in his work by an Italian worker who diluted the pigments in raw milk.

Cocteau talks of his drawings in unpretentious terms, describing them as “tattoos” or “graffiti” as if to escape mention of their artistic value. He ends his short film with a reflection on the purpose of his work, which he sees as firmly grounded in his experience of history; art to appease the present rather than pursue the sublime: “Picasso, Matisse, Chagall and myself have, on the shore where Renoir used live, attempted to vanquish the spirit of destruction which has taken over our times; we have adorned the walls that man dreams of destroying. Perhaps the love which we put in our work will protect them from the bombs.”

Is the villa open to the public?

It used to be and soon will be again. The listed villa (decorated by Madeleine Castaing) was sold by the Weisweiller family in 2016, who could no longer afford the heavy taxes, to Russian real estate developer Ilya Melia, who is currently renovating the villa and its tattoos. Villa Santo Sospir will remain closed until September 2021, when visits will resume.

In the meantime, there are several other historical villas in the area that are equally as worth a visit. Still on Saint-Jean-Cap-Ferrat stands the sumptuous Villa Ephrussi de Rotschild, while in nearby Beaulieu-sur-Mer is Villa Kerylos, a turn of the century house designed to emulate an Ancient Greek villa.