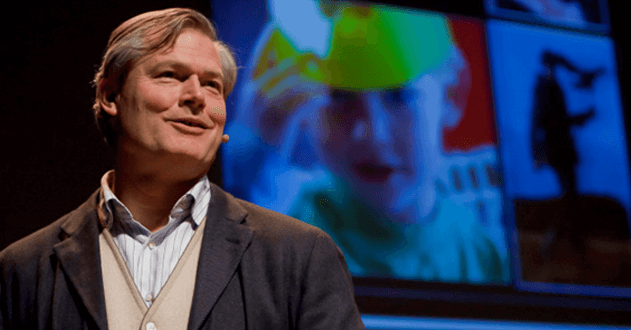 They call him the Steve Jobs of sustainability. During Monaco’s CC Forum: Investment in Sustainable Development, Monaco Tribune had the opportunity to interview Gunter Pauli, a sustainable entrepreneur with a thousand and one projects. He spoke to us about digital learning, why his ideas are better accepted in Asia, and how mangroves might be the trick to stop tsunamis.

We met Mr. Pauli after one of his talks at Monaco’s CC Forum. Wearing a Bavarian jacket, he was offering his very own edible coffee bars to anyone who walked by. The bar, he tells us, uses all of the coffee berry – both pulp and coffee bean – therefore bridging the waste gap created by powdered coffee, which uses only the bean. “A bar is equivalent to two espressos. The farmer gets more money because he sells the whole fruit, and we generate less waste,” he explains.

“I only talk about the things I’ve achieved, never about what I plan to do”

Mr. Pauli talks of his many projects as if they were interesting anecdotes he just happened to have heard of. It is only once you get past the casual tone that you can grasp the gargantuan extent of his work: Gunter Pauli founded and chaired over 10 companies, including Belgium’s first sustainable factory; his was also the “Zero Emissions Research and Initiatives” (ZERI) at the United Nations University in Tokyo, and the Global ZERI Network, a foundation that seeks to redesign production and consumption systems into clusters of industries inspired by natural systems. He is also the founder of the Blue Economy, an open source community to share innovative ideas.

“I only talk about the things I’ve achieved, never about what I plan to do,” he says. Perhaps the very embodiment of the doer, with a transatlantic spirit of optimism that believes anything is possible, but without the damning thirst for money. “I don’t like the American money, money, money, approach,” he tells us. “I’m very much interested in the new generation of entrepreneurs that is emerging, the so-called entrepreneurs for the common good,” he says.

Mr. Pauli is keen to tell us about a project he’s carrying out in Indonesia. This one is all about mangroves. “We’re massively regenerating mangroves. We’ve put metal nets around them so that baby shrimp can come in, but as they grow bigger they can’t go out anymore so that we naturally have a shrimp farm,” he tells us. “The mangrove roots grow stronger with time and within ten years they are tsunami resistant,” he explains.

However revolutionary Mr. Pauli’s projects may be, Europe has never been particularly eager to adopt them.  “Asia had a massive population explosion, resulting in massive cities, large-scale pollution … quality of life is not good,” he answers when we ask him why his work is better accepted abroad. “People who grow up in these conditions are not primarily thinking about getting rich as an American entrepreneur would – they’re thinking about how they can help their community”.

“In Europe, there are too many regulations, too many lobbies who do not want to give the space to new technologies. Take li-fi internet for instance – it was invented in France, but it is coming out in China.” And our loss is great. “Europe has so many great inventions, but it somehow forgot to turn them into a business model. We have created a bubble of confidence. We haven’t gone far enough. We have been happy with very little.”

Digital learning: “The situation is disastrous. It’s stunting our brain”

When we mention Coronavirus, one topic seems particularly dear to him: Screen time. “We have forced children to look at a screen. A screen is in 2D but our world is in 3D. Learning in 2D, it impacts our cognitive capacity. The situation is cognitively disastrous. It’s stunting our brain,” he explains. But the pandemic is just the tip of the problem: “We know that computer screens are too blue and that the blueness shuts down your brain. You’re 24 times less neuron-connected with your environment. And yet we do nothing about it,” he says.

From ocean protection to ocean regeneration

The Fairmont Hotel in Monte-Carlo, where the conference took place, has an almost 180-degree view of the sea, and quickly we get talking about Monaco and Ocean protection.  “Monaco is a miniature state,” says Mr. Pauli. And as a miniature state, it should be a leader. I would like to imagine a micro-plastic free Monaco. We would have to design a sea-weed curtain, which would of course still allow ships to go through,” he says.

“We need to create micro-plastic free-zones thanks to seaweed curtains that will absorb microplastics – because we can’t clean the oceans in a hundred years with all the rubbish we’ve put in them,” he adds. And while the environmental toll of the last few years is disheartening, Mr. Pauli never seems to lose hope. It’s all a question of mindset, he says. “We need to switch from protection to regeneration. We’re losing the game,” he says. “It should not be about ocean protection, it should be about ocean regeneration,” he insists.