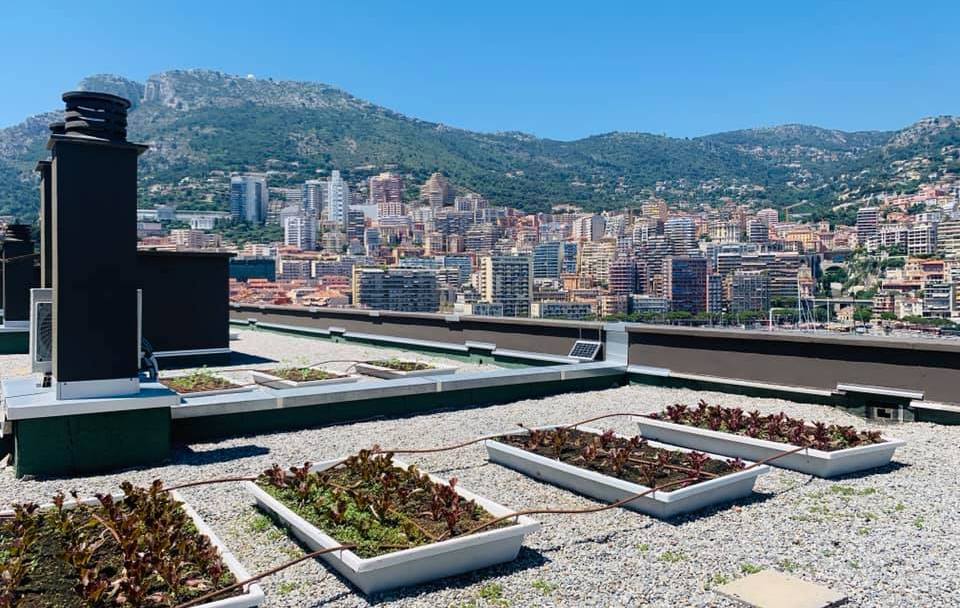 With over 19,000 people per square kilometer, Monaco has one of the highest population densities in the world, making a less than ideal place for farming.  Yet Terre de Monaco has defied the odds. The urban agriculture company currently exploits 1,600 m² of arable land in a country with an area just over two square kilometers.

As Jessica Sbaraglia knows well, to grow fruits and vegetables in Monaco, you need to start from the top. And that is exactly what Terre de Monaco does. Specialised in urban agriculture, the company installs vegetable farms on the roofs of Monaco’s buildings.

Terre de Monaco was founded in 2016. “Six years ago, I shut down my first company and underwent a bit of an existential crisis. What is my purpose in life, what sort of values should I embody?” says Jessica Sbaraglia, who was born in Switzerland.

That taste, I’ve never been able to find anywhere else

It was then that she remembered her parents’ vegetable garden, its fruit and vegetables, and their exceptional taste. “That taste, I’ve never been able to find anywhere else,” she says. So, she starts a vegetable garden on her balcony, to “therapeutic, relaxing and rewarding” effects

But soon enough, Jessica Sbaraglia runs out of space. It’s when she starts to “colonise” her neighbours’ balconies that she comes up with the idea for Terres de Monaco. Her new company will farm Monaco’s roofs. “They didn’t know what to do with me. They thought my ambitions a bit ridiculous. They thought it wouldn’t work, that there was no room,” she says.

Today, Terre de Monaco grows fruits and vegetables on five different buildings. There’s a  400 m² vegetable garden on The Monte-Carlo Bay, whose produce goes straight into the kitchens of starred chef Marcel Ravin. A second vegetable garden is on the Tour Odéon, which is now home to 450m² of farmland, as well as 60 hens*, ten beehives, and about thirty fruit trees. Terres de Monaco has also set up vegetable gardens on the 14th floor of the Ruscino residence and on the roof of the Prince Albert II of Monaco Foundation, as well as a therapeutic garden at the Princess Grace Hospital.

Seasonal fruits and vegetables, as well as the eggs and honey, are sold to people who either live in the building or who work on the farm. “The products we harvest at the Odeon Tower, for example, are sold to the people who live there,” explains Jessica Sbaraglia. Terre de Monaco has now expanded its services to offer individual consultations on how to create and maintain a vegetable garden. They also run numerous educational workshops in schools.

I am convinced that urban agriculture has a great future ahead

“We’re working on a fully-fledged farm, that will be built near the Nice stadium. The farm will be spread over seven roofs, which will be connected to each other by footbridges. We’re also introducing a bar and restaurant, which will serve our products”, explains Jessica Sbaraglia. A similar project is planned in Belgium – Terre de Monaco now becomes Terre de Tubize – where 8,000 m² worth of roofs will be turned into vegetable gardens. Other projects in the towns around Monaco, such as Cap d’Ail, as well as in Switzerland are also in the books.

The pandemic has put environmental issues at the forefront, as Jessica Sbaraglia is well aware: “I am convinced that urban agriculture has a great future ahead. More and more businesses are getting involved because the demand is there”.

There’s something almost poetic about Jessica Sbaraglia’s work: In order to go back to earthly roots, Terre de Monaco looked up towards the sky.

* The hens also help recycle a yearly six tonnes of vegetable waste from the Terre de Monaco vegetable gardens and other Monaco establishments, such as the Café de Paris.