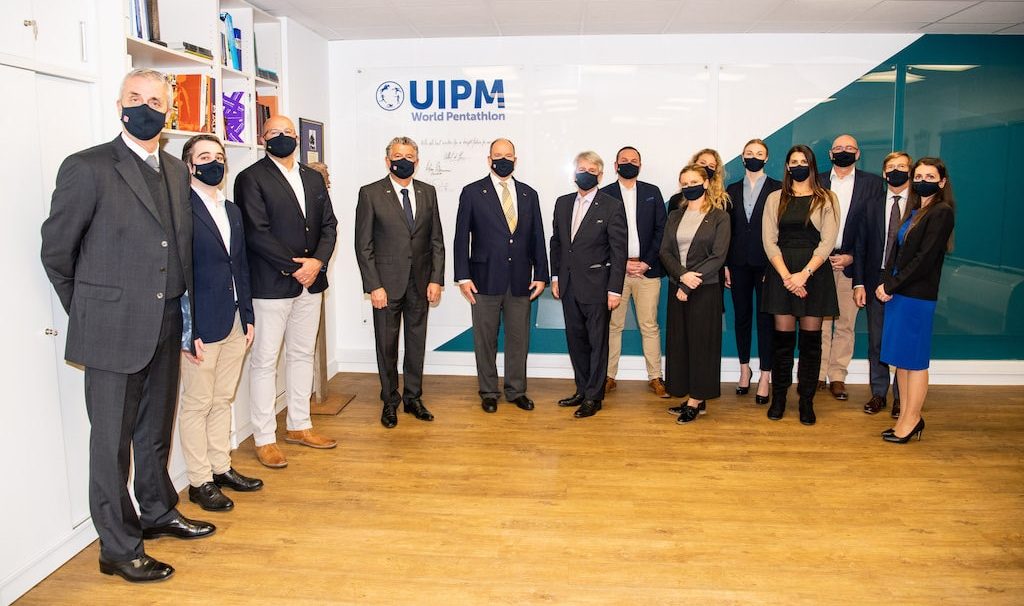 Prince Albert II of Monaco inaugurated the new headquarters of the Union Internationale de Pentathlon Moderne (UIPM), of which he is the honorary president.

The UIPM will now chair its meetings in an office of the Louis II Stadium in the Fontvieille neighbourhood. The UIPM has had its headquarters in Monaco since 1997. President of the UIPM Dr. Klaus Schormann and Vice-President Joël Bouzou welcomed the sovereign for a socially-distanced visit of the new headquarters.

The new offices have been renovated and redecorated in the colors of the UIPM. Modern Pentathlon is an Olympic Sport that compromises 5 different disciplines: horse riding, fencing, swimming, shooting, and running. Prince Albert II spoke with staff and signed a Plexiglas wall. He also took part in a game of laser shooting.

Founded in 1948 in Sandhurst during the London Olympic Games, the UIPM now has more than 120 member federations. In addition, it oversees a global sports pyramid comprising a wide range of multi-sports. “This new headquarters gives us more space and opportunities for the organisation to grow, which is encouraging and motivating,” said Shiny Fang, the UIPM’s Secretary General.

For his part, Prince Albert II praised the Union’s commitment over the years: “I am pleased to see the new layout that will be adopted for Paris 2024. It is another major step forward in modernising sport and making it more media-friendly and user-friendly.”