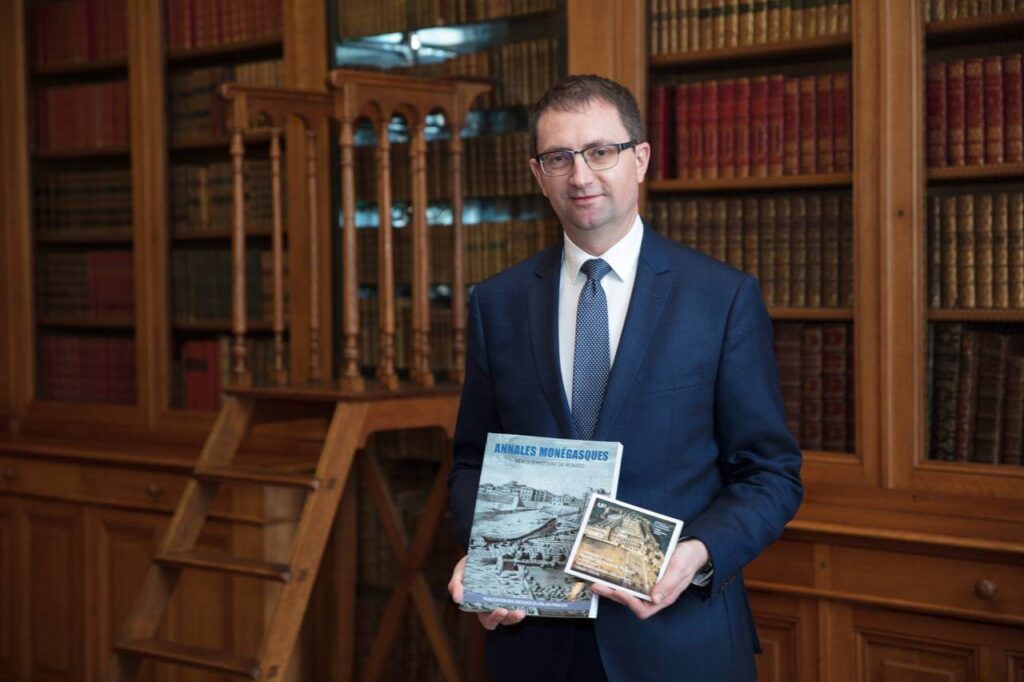 In one of the oldest city-states in the world, the Palace archivist is a political advisor in his own right. Meet Thomas Fouilleron, the man who puts history at the service of the Prince Albert II.

If you ever pay a visit to Thomas Fouilleron, the Palace concierge will take you through windowless corridors and the former stables, now converted into a garage where Palace mechanics are busy dissecting cars. On this side of the building, the Palace of Monaco feels like a well-oiled machine.

“My favourite documents are not necessarily the most striking ones visually, but rather those that have been annotated by one of the Princes,” says the director of the Princely archives as he sits at his desk, a miniature statue of Henry IV of France next to his computer. “Even silly drafts can hide within them invaluable historical evidence.”

An expert in the history of Monaco

Thomas Fouilleron grew up right in the heart of France in the rural region of Auvergne, known for its dormant volcanoes. Summers are spent at his grandparents’ house in Nice. On the sun-drenched Côte d’Azur, a daytrip to Monaco is a rite of passage. “I liked the football team, the Prince’s Carabinieri, the princesses… as a child, it’s the stuff of dreams.” Noticing a budding interest, his grandparents buy him lead statuettes of the carabinieri after every daytrip.

A former high school teacher and university lecturer, Thomas Fouilleron holds a doctorate in the history of the Princes of Monaco between the 18th century and 1848. He has been director of the Palace archives since 2012, after first coming to Monaco as a high school history teacher.

He is also the pen behind the textbook of Monegasque history used in the Principality’s schools. He was commissioned to write it when he was still teaching at Monaco’s Lycée Albert I. “The main request of the educational board and the Prince was that I be objective,” says Thomas Fouilleron as he pulls out the 350 pages textbook. “I assume the Palace liked the book,” he adds amused. “They would have never appointed me director of the archives otherwise.”

From former fiefdoms to coins: making history relevant to the present

Four kilometres long, Monaco’s Princely archives are more or less the same length as the country’s coastline. As director of the archives, Thomas Fouilleron has previously worked on the design of the country’s stamps and coins, amongst other tasks. He is now helping research the Palace’s 16th century frescoes, which are currently being restored. The archives will also assist with preparations for the centenary of the death of Albert I, which will be celebrated in 2022.

Another task that falls under Fouilleron’s expertise is rehabilitating the links between Monaco and its former fiefdoms, which are mostly spread around France, Liguria and the former kingdom of the Two Sicilies in southern Italy. “The Prince sees the fiefdoms as a possible economic link, as well as an opportunity to promote the various towns and villages,” explains Fouilleron. A website, available in French, records all the locations. The Historic Grimaldi Sites are mostly linked to Monaco through diplomatic or marriage ties or, in the case of Dolceacqua, a village in Liguria, murder.

Did you know? The town of Dolceacqua is linked to Monaco through the intriguing Renaissance cocktail of marriage and murder. Dolceacqua is the fiefdom of the Doria family, which was first allied with the Grimaldi family in 1491, through the marriage of Françoise Grimaldi to Luca Doria, Lord of Dolceacqua. However, the marriage is marred by tragedy. In 1523, the son of the couple, Barthelemy Doria assassinates his uncle Lucien Grimaldi right in the Palace of Monaco. To celebrate the 500 years of the murder, Monaco and Dolceacqua will be twinned.

At the crossroad between politics and history

The archivist works in close proximity with the Prince, who Fouilleron says is very much interested in history. “We’re definitely not your average archives. We do not only deal with the inventory and the promotion of the archives, as would a public archive, but we also collaborate with the Princely Cabinet.” Alongside normal archival duties, such as digitalising the Palace’s photo collections, the Princely archives play an essential role in the Palace’s communication as well as in its politics.

Thomas Fouilleron says that his job gives him a middle-ground between the bookish work of historical research and the excitement of real-life politics. “You mustn’t forget that the legitimacy of Prince Albert II comes from his family and the history of Monaco. History is for the Sovereign, more so than for your average head of state, a necessary tool that without which he would, if I may say so, just be an average man.”

“A colleague once told me that I was lucky that my archives belong to a dynasty that still stands today,” says Thomas Fouilleron as our interview draws to a close. “It’s true. I have the privilege of being able to put history at the service of politics by advising someone who is in the midst of action about how history can help them.”

So, is he an advisor of sorts? “Yes, I think you can say that. The Prince doesn’t see history as merely a family affair, but as a tool to enable future decisions.”

>> READ ALSO: The Grimaldis: Princes of Monaco for 700 years