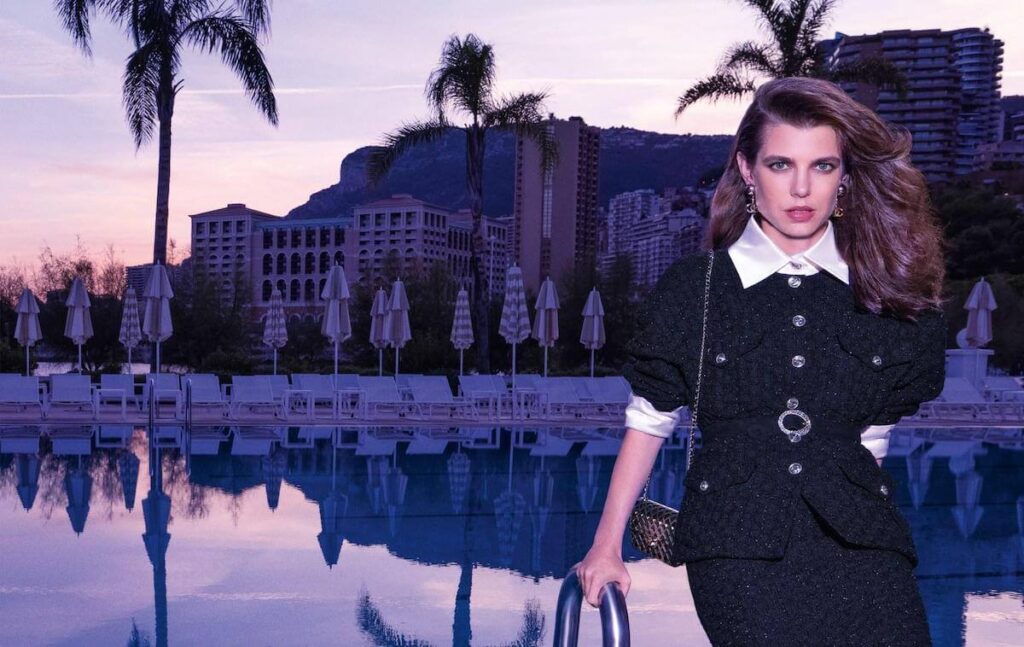 Luxury fashion brands have long been drawn to the Principality with all its charm. Chanel, Celine and Casablanca are some of the latest names to have been inspired by Monaco.

Monaco is known for many reasons. Sunny weather, casinos, nightlife and the legendary Grand Prix ciruit are all part of its appeal. When times are hard, Monaco has many ways of inspiring people, its charm reminding them of better days ahead.

Daughter of Princess Caroline, Charlotte Casiraghi became the latest ambassador to the French luxury house at the start of this year. As part of her campaign, she starred in the official video for their 2021 ready-to-wear Spring collection. Filmed in Monaco by Dutch duo Inez & Vinoodh, black and white shots were interspersed with coloured scenes, as iconic parts of the Principality came into view: Prince’s Palace Square, Monte-Carlo Beach swimming pool and the gardens in Karl Lagerfeld’s Villa, La Vigie.

Charlotte Casiraghi and Chanel are interested in more than just high-end clothing. In fact, she shares a love of culture with the brand and together they have set up a literary club. Launched on their social media, the club is a way of paying tribute to the designer Karl Lagerfeld, who also shared in this love of culture.

Celine films in Monaco for their latest collection

Another iconic brand to launch a new collection is Celine. Showing off their 2021 Spring Summer range is model Kaia Gerber, photographed by artistic director Hedi Slimane. A combination of classic pieces and new streetwear trends have been brought together in this collection, with the fashion house choosing the Monte-Carlo Casino for their shoot. Last October, they opted for the athletics track at the Louis II stadium as the backdrop for their previous collection.

As Casablanca took to the spotlight with their Autumn 2021 collection, they provided viewers with the perfect pick-me-up. Choosing Monaco as their filming location, the video was bursting with joyful celebrations, glamour and festivities. Just what we need right now! Entitled “Grand Prix” the film celebrates the Monaco’s legendary Formula 1 race, which was cancelled last year for the first time since 1954.

Monaco may have been the location for the shoot, but its influence can be seen in other ways too. Taking a closer look at the clothing, lots of checked patterns have been used, similar to those on the floor of the Monte-Carlo casino and their playing cards. It seems the Principality was more than just the backdrop to their 2021 collection.