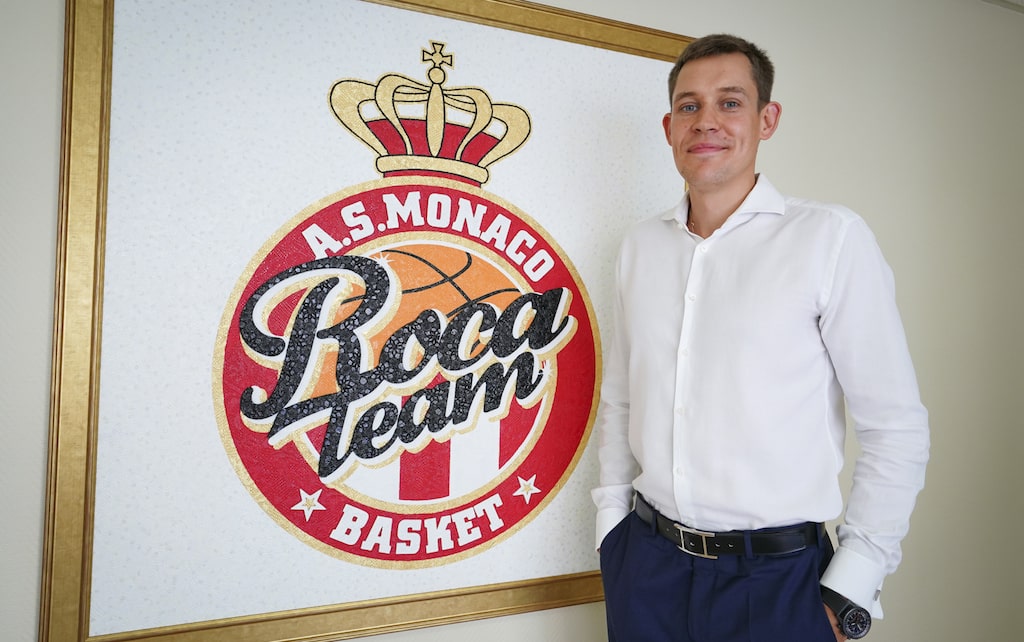 Manager of AS Monaco Basket since 2015, Oleksiy Yefimov has propelled the Roca Team to triumph, helping the boys move from Pro B into the Euroleague next season. The trusted wingman of club President Sergey Dyadechko, this Ukrainian is passionate, hard-working and sure to have a brilliant sporting future ahead of him in basketball.

Ahead of his years, Oleksiy is no stranger to reaching dizzying heights at a young age. Despite his talent though, he has had to prove himself time and again to seasoned pros of the game. Battling against doubts about his age, he is out to show that his young skillset can more than make up for his lack of experience.

“When dealing with players’ agents or players themselves I would always try to find an agreement prior to our first in-person meeting,” he says. “Over the phone it’s hard to tell someone’s age. But when you’re an experienced agent or lawyer and you have a young guy in front of you, you always try to use this to your advantage and privilege.”

In the beginning, Sergey had doubts about him because of his age. But he quickly changed his mind when he saw the club was progressing in the right direction.

As the comments on his age kept coming, this graduate from the Kharkiv Polytechnic Institute pushed forward with his career undeterred. In fact, climbing the ranks at such a young age become his trademark. Aged just 21, he made one of the greatest connections of his career back in 2007. Having worked as the press officer and then the marketing director at BC Kyiv, the giants of Ukrainian basketball at the time, he was offered a job as their manager: a key promotion that led him to meet Saša Obradović.

“I remember he wanted to learn everything about basketball,” explains the former coach of the Roca Team during the 2019-2020 season. “We went through a difficult time together, when the club was bankrupt and several plays left. But we built a strong relationship, based on trust and respect.” So when Saša Obradović took over at BC Donetsk the following season, during Sergey Dyadechko’s presidency at the club, this young manager saw a world of opportunity awaiting him.

“At the end of the first season, I told Sergey that I thought Oleksiy should join the team. I knew what he could bring as a manager, in terms of his dedication and professionalism. In the beginning, Sergey had doubts about him because of his age,” explains the Serbian coach. “But he quickly changed his mind when he saw the club was progressing in the right direction.” That year, BC Donetsk were crowned Ukrainian champions. “The amount of solidarity in the team was incredible.”

Sometimes, he (Oleksiy Yefimov) trained harder and was more motivated than certain players were.

Since that season, Sergey Dyadechko and Oleksiy Yefimov have been inseparable. “This year is our tenth season together,” smiles the Roca Team manager. “He is the person who gave me the chance to work at the highest level, at such a young age, giving me a carte blanche. Every day, I try to pay him back for believing me, after giving my heart to BC and then to the Roca Team these past seven years.”

A Stakhanovite with a big heart

“He must be in touch with the President at least 15 to 20 times a day,” smiles Amara Sy, a former Roca Team player, now signed to Paris Basketball. “Oleksiy is someone who takes on a lot of responsibility and is constantly under pressure” and has earned the nickname of “Admiral” since moving to the Rock. “At the time, I was really impressed at how well such a young man was able to handle this pressure.”

Known for putting in the effort, working hard and being able to “trim down during weight training before going on to shoot three pointers,” Oleksiy Yefimov is not the type to let himself go. “Sometimes he trained harder and was more motivated than certain players were,” laughs Amara Sy. “He’s also incredibly generous, respectful and does everything he can to give players the best possible chance at succeeding. Today he is obviously a key part of our game plan and an integral part of the club’s success.”

Passionate about sports, he enjoys getting out and exercising. From cycling to swimming, boxing to tennis, he even trains with his wife (an ex-rhythmic gymnast) quite often. But it is in the office, that this father of one is preparing to take on his greatest sporting challenge yet: putting a killer team together for next season’s Euroleague. “A huge challenge,” but he has a track record of recognising talent, having been responsable for hiring Mathias Lessort and Rob Gray: two legendary names on the squad during AS Monaco Basket’s fantastic season. “We are going to work hard to get to where we need to be.”

As well as his managerial roles, Oleksiy Yefimov has also tried his hand at reporting, previously working with Sports Express, the biggest Russian daily sports newspaper. He was also a coach for a time, but soon discovered it was not the job for him: “I lost 10kg and I told myself I would never take on a coaching role ever again.” Despite being young, he has already achieved so much in his career, refusing to let his age hold him back. For Saša Obradović, this youngster’s success comes as no surprise. “In Monaco, I met a mature man, who was grown-up and hardworking. He’d made a big name for himself in European basketball.” At 35 years old, the future is his for the taking.