Dmitry Rybolovlev and his crew win the Rolex Fastnet Race 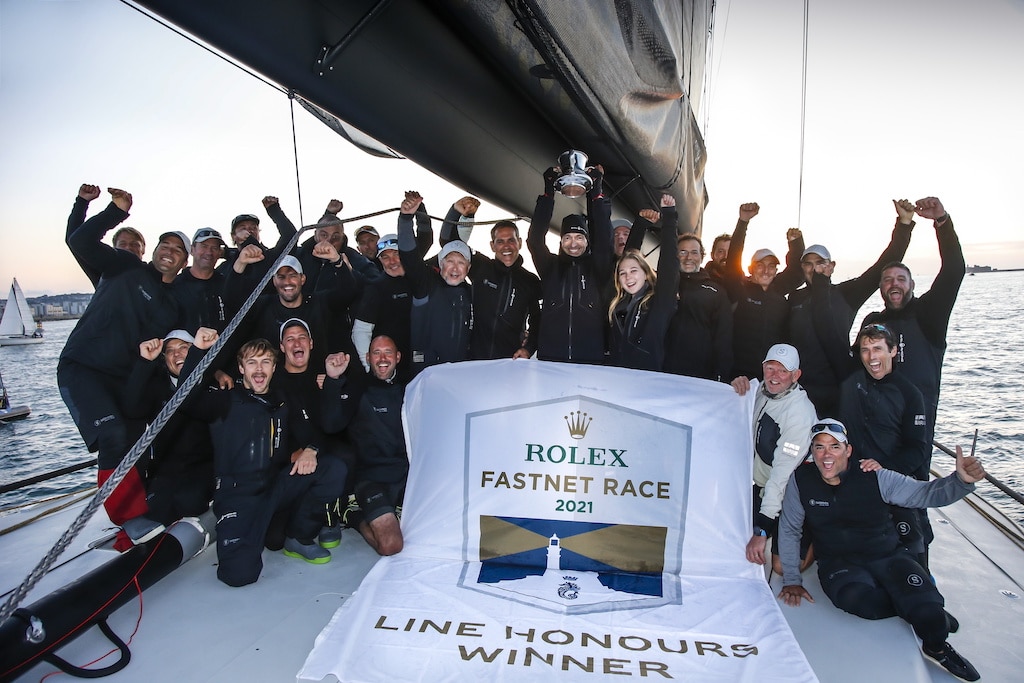 Complete victory for the Principality. On Tuesday 10th August, whilst AS Monaco won 3-1 against Sparta Prague, Dmitry Rybolovlev’s superyacht crossed the finish line of the Rolex Fastnet Race in Cherbourg at 9.30pm. This was a proud moment for the Yacht Club of Monaco, home port of the Skorpios (MON001), and of which Dmitry Rybolovlev is a member.

The crew completed the Rolex Fastnet Race in 2 days, 8 hours, 33 minutes and 55 seconds. The 695 nautical mile race takes place between Cowes (UK) and Cherbourg (France), passing through Fastnet Rock (Ireland) and off the Scilly Islands (UK). The world’s largest racing monohull won the prestigious Monohull Line Honours. The yacht, which has some very promising stats, such as a displacement of 58.8 tonnes, of which 23.2 tonnes are in the fin and keel, and a downwind sail area of 1961 m², has proved itself.

Regarding his fresh victory, Dmitry Rybolovlev confided: “We are very satisfied with the boat, the team was great. We want to thank the whole team for their efforts. We tried to be careful, especially with the strong wind at the start, but we are looking forward to seeing what the boat can do in the next races. Passing Fastnet Rock was magical, it was a really special moment”.

Dmitry Rybolovlev, businessman, investor, philanthropist and current president of AS Monaco, is passionate about water sports, and more particularly about yacht racing (the tactical dimension of making quick decisions reminds him of business).

The name of Dmitry Rybolovlev’s crew, Skorpios, refers to a beautiful Greek island that belongs to his family. On his boat, the businessman is the helmsman: he steers the ship with the tiller.

Originally a passionate surfer, he became enamoured with yacht racing five years ago. Since then, his hobby has led him to race after race and to the title of world champion after winning the ClubSwan 50 class race held in Palma de Mallorca, Spain.

Then, in July 2021, Dmitry Rybolovlev received a new ClubSwan 125 racing yacht, which he named Skorpios. An international team of professionals was assembled to compete with the boat (29 crew members in total, including the owner himself).

An expert crew for an exceptional boat

Fernando Echávarri, the skipper of the crew, is a former Olympic champion (Beijing Games 2008, World Champion 2005 and 2007 and ISAF Sailor of the Year 2005). Nine other members of the crew have already competed in various high-profile round-the-world races, and some are also Olympic sailors. The crew also includes Dmitry Rybolovlev’s youngest daughter, Anna. She shares her father’s passion for sailing and participates in regattas.

Before the race the skipper was cautiously optimistic as it is a new boat. “It’s too early to say if Skorpios will be the fastest monohull yacht, but, without a doubt, she has a huge potential,” he said. And yet, his team has done everything to succeed.

“It was quite impressive. We were all a bit scared because it was the first time we competed with this boat. It was choppy, 25 knots of wind but everything went well. The boat is strong and powerful, we were quite impressed when we reached the Solent,” commented Echávarri. “I am very happy and proud of this team. We sailed quite conservatively. We saw the IMOCA boats, they fly. When you see them sailing in these conditions, you understand how powerful they are. Fortunately, we go faster in light winds.

The businessman played a key role in the evolution of the Skorpios concept. He has been deeply involved in all aspects of the boat’s construction. He motivated the team to be innovative and think outside the box, which resulted in many extraordinary solutions for the vessel.

“Mr Rybolovlev is a passionate sailor who took up this sport around five years ago and has made remarkable progress since then,” comments Echavarri. “He was deeply involved in the main decisions regarding the boat construction, especially the areas of development. He is passionate about new technologies and has been challenging the team to innovate and think out of the box”.

The pride of its creators

This giant of the seas is a state-of-the-art jewel. Manufactured by ClubSwan Yachts, the high performance division of the Nautor’s Swan group, the superyacht has been designed to reduce weight while increasing stability. Her hull, deck and structure are made of carbon fibre, offering lightness and accuracy.

“At Nautor’s Swan, we are very proud to have completed the construction of the ClubSwan 125. It will be a milestone in the history of yachting. We are grateful to the owner for trusting Nautor to build this boat, sharing with us the same values we have of innovation, technology, quality and reliability,” said Leonardo Ferragamo, president of the Nautor Group. “The project has been incredible and the opportunity to work with the world’s leading boat builders, designers and technicians has been impressive”.

“The original brief was for a very fast super yacht for coastal racing, but as we developed the project it changed. We all realised, the owner first, that this yacht had to be a record-breaking machine,” commented Enrico Chieffi, vice president of the Nautor Group and head of the CS125 project, speaking from the boat’s deck just after the sea trials. “And so the scope changed, and the boat was developed for success in ocean racing”. The race for the titan has only just begun. The next big event for the Skorpios ClubSwan 125 is the Rolex Middle Sea Race in Malta in October 2021.