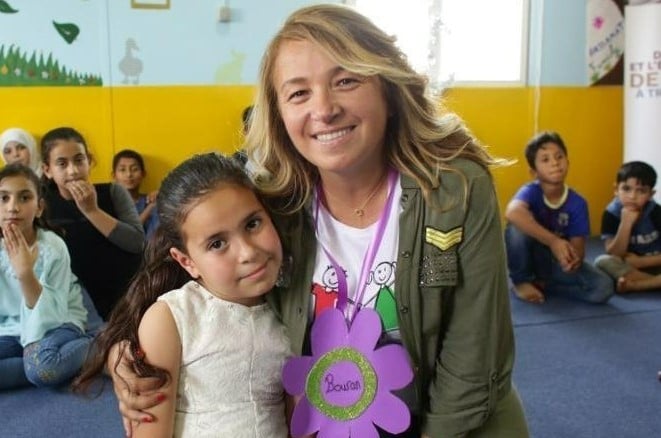 The president and founder of the Friends of Lebanon Monaco association is a multi-faceted woman. Nurse, operator, hostess, shopkeeper and now owner of an events company, Bouran Bouery has “lived several lives”. Portrait of a mother with a big heart.

You’ve probably come across this bundle of energy if you’ve passed by the Carrefour in Fontvieille. Brown hair, round face and tanned complexion, her smile is comforting and puts you at ease. After getting a glimpse her friendliness, you understand why Ms. Bouery has dedicated her life to charity.

Accompanied by volunteers, Boubou – an affectionate nickname derived from her initials – has just spent six thirteen-hour days at Fontvieille Carrefour. Pasta boxes, milk cartons, bottles of oil… All the basic necessities that Lebanon is in desperate need of.

Symbolically, this action took place in response to the sad anniversary of the double-blast in the port of Beirut on 4 August 2020, where 220 people lost their lives, an entire neighbourhood was razed to the ground and a nation was left traumatised. “Unfortunately the problems of today in Lebanon, I think it’s good. Good because the world is opening its eyes to another problem: that of the people who were starving.”

Altruism, from father to daughter

As a teenager, she arrived for the first time in 1987 as a nurse and stayed in the Principality for two years before returning to Lebanon under the bombs. She left the hospital in Lebanon a few years later, shocked by the suffering she witnessed. “In Beirut, I saw people die in front of me. Friends left because of the war. Limbs cut off.”

Since then, the mother of two children has not been idle: switchboard operator in a hotel, hostess at the Cannes Film Festival… “I’ve lived several lives”. Passionate about fashion, she launched her own line of clothing and found herself in charge of three shops before selling everything. “After 23 years, I wanted to try something else. Now, Bouran Bouery has a company in the events industry, which leaves her more time to devote to voluntary pursuits, in particular to travel back and forth to Lebanon to receive and organise food parcels.

Even as a child, Boubou was always concerned about others. “I was born with that.” A legacy left to her by her father, who tragically died in a car accident whilst doing humanitarian work. An event that shaped her personality as she grew up. “I always told myself that I stayed alive to accomplish a mission.”

Friends at the heart of the action

She accomplished this mission with flying colours. The Friends of Lebanon association was created in 2002, and “not in 2004 as the official documentation indicates”, insists the founder. Two years of work that Bouran rightly values. “Indeed, when we celebrated the tenth anniversary, the Sovereign asked me, “Is it true that it has been ten years?” she recalls with a smile. The association benefits from the support of the Prince, collaborates with Fight Aids Monaco and works with the Red Cross, among others.

Faced with the distress in her country, the idea of a charity event quickly emerged. Bouran, accompanied by her friends, raised 35,000 euros. “We immediately helped a school that takes care of disabled children in Lebanon.”

Among her friends is the wife of the association’s emblematic patron, Didier Deschamps. The association exemplifies generosity, primarily bringing together Buran’s friends that are from all walks of life. “Hence the name Friends of Lebanon.”

“Didier has never let us down, if he wasn’t by our side we wouldn’t have dared.” The French national team manager has accompanied the project from one evening to the next, which have become galas, and from one action to the next, which have become associations. Every year, he celebrates Christmas with the children and helps distribute 2000 to 3000 gifts.

Everything we do, we see the benefit for the children as it will reach them directly or indirectly.

Working in an emergency

Initially dedicated to children, Friends of Lebanon works for all Lebanese. “Everything we do, we see the benefit for the children as it will reach them directly or indirectly. Building schools, parks, public gardens and clinics in disadvantaged towns, the association is now focusing on the essentials. “We’re working to save people by giving them food and water, and treating them in hospital. There is a double emergency: the Covid-19 emergency and the humanitarian emergency.

Finally, every fortnight for the past year, the association has also been in Nice distributing food parcels for those in need. A demand that has increased since the pandemic. “Suffering is everywhere, not just in Lebanon”, so Bouran Bouery does her utmost to help, at her own level.

We finish the meeting by going to the office, where the president gives us the white, red and green coloured T-shirt and mask. And even… a painting made by a child. Behind this smiling face and this deep sadness, one thing is sure: like Mother Theresa, Boubou won’t let anyone leave less happy than they were before they saw her.

For more information, visit the Friends of Lebanon association