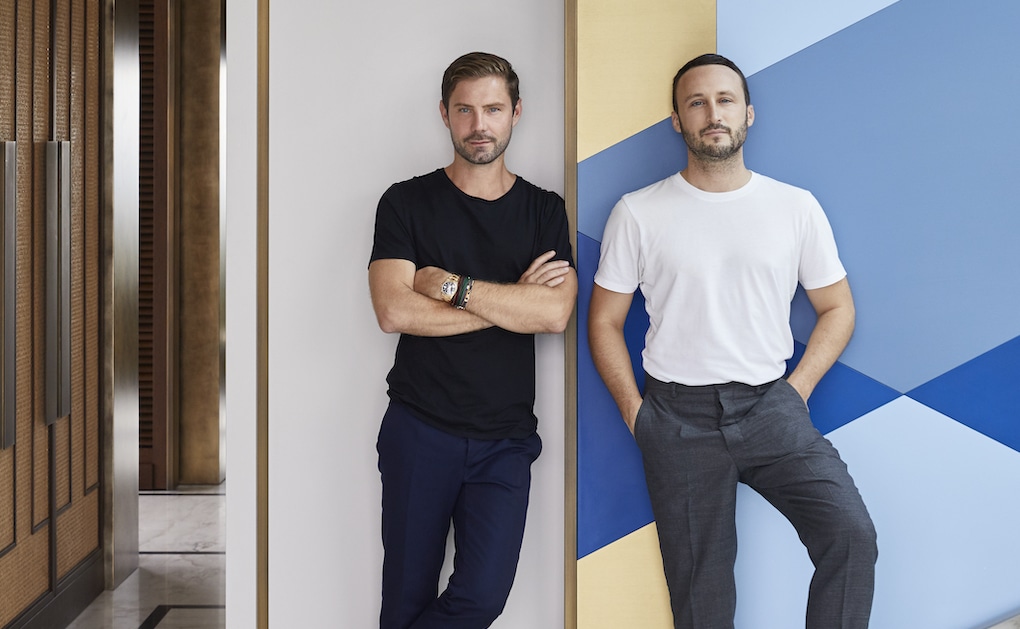 The Monegasque interior architecture firm Humbert & Poyet received the prestigious French Design Label at the Elysée at the beginning of the year.

It is a story about a business partnership, but also about a friendship. Frenchman Emil Humbert and Monegasque Christophe Poyet have been managing their interior architecture firm Humbert & Poyet, based in Monaco, for 14 years now.

“I met Christophe at the end of my architecture studies in Paris,” says Emil. “He had studied interior architecture. I started working alone on projects in the Principality, but I was looking for an associate. When Christophe graduated, we worked together on residential projects in the Carré d’or (Golden Square). It worked out very well and the Humbert & Poyet agency was born.”

But once the partnership was created, they still needed to get along professionally! If, on paper, Emil focuses more on architectural plans and working with spaces, while Christophe is more concerned with materials and colours, both of them are actively involved in all aspects of their work.  “We got along very well straight away, we are very complementary at work.  We have never had any clashes: if we disagree, we move the debate forward in the interest of the project.  We’re both very involved. In the creative process it’s good to have someone who is your equal,” says Emil.

And the partnership has proven more than successful. Starting out as a duo, today their agency has about thirty members. The Principality also played a role: “When we started working together, Monaco gave us the opportunity to work on important projects even though we were very young. This is a country on the scale of a city and people are more prepared to give you a chance. You get more visibility quickly! It was a real springboard for us right from the start.”

Among the major projects carried out in the Principality, “26 Carré d’or” in Monaco, is the “Monegasque flagship” for the firm. This prestigious, very large-scale project, reflects Humbert & Poyet’s DNA. That DNA involves the reinvention of traditional luxury concepts, reworked in a contemporary way.

“It’s a flamboyant style, which expresses a zest for life and rules nothing out”, says the French architect. “We work with substances, textures, and how we put them together. Right down to the finest detail. For example, we will showcase a certain wood by matching it with brass, or we will work marble in three different ways (smooth, rough honed and bush hammered) to have a juxtaposition of its tactile properties and the effects of shine and mattness of each material.”

This distinctive, delicate style, mixed with French and European craftsmanship, is what enabled the young duo to receive the French Design 100 Label in January. The unique and prestigious prize is awarded each year to 100 winners out of more than 1,000 candidates, honouring architects, designers and decorators who promote French style internationally. “We were very honoured to receive this award,” Emil recalls. We were greeted at the Elysée by Emmanuel Macron and his wife with our colleagues and staff. It was a very special moment for us.”

And yet, when they sent in their application, neither Emil nor Christophe expected to receive such a distinction: “We submitted our application through a project in New York, but without really thinking about it. When we heard back, when we knew we were going to be received at the Elysée we were really very surprised and very honoured. After the ceremony, we were energised by the meeting and by the speech Emmanuel Macron made about French architecture, design and style.”

The project in New York is Aquazzura, an Italian shoe shop, which the two architects designed in the US: “We chose to present this shop because it was the expression of our French style for an Italian brand in a store in the United States. We found it very interesting in terms of showing and expressing our work.”

With this prestigious distinction, Christophe and Emil continue to develop their ideas internationally. A Mandarin Oriental hotel in Vienna, a villa on Lake Como and residential projects in London and Saint-Jean-Cap-Ferrat are expected to complete soon. Projects that will allow the two architects to express their boundless creativity.