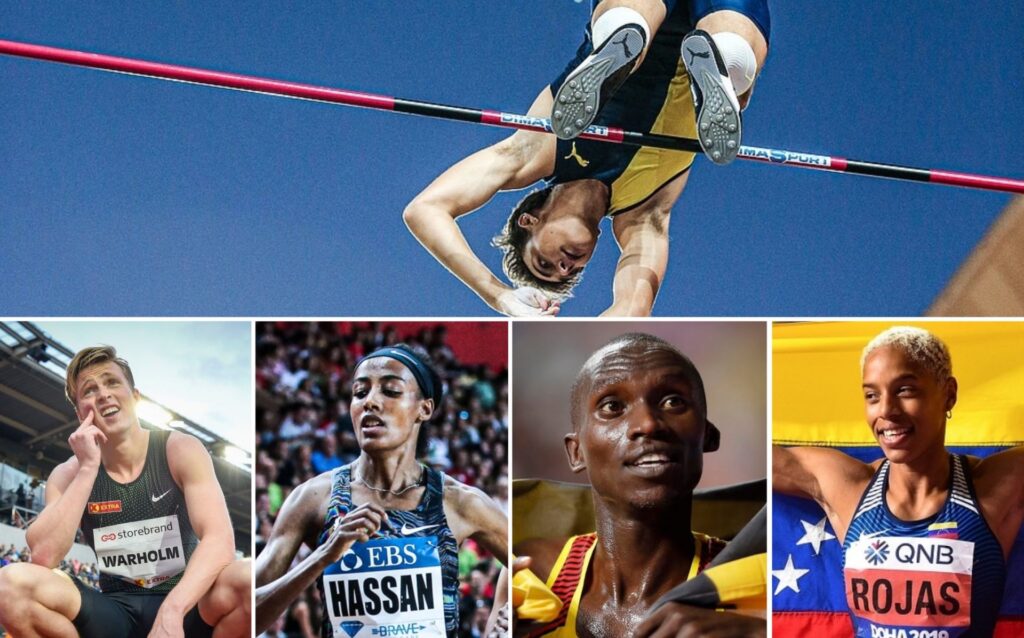 The season is taking off at last. Starting Friday August 14th at 7:40 pm, Monaco’s Louis II stadium will welcome some of the biggest stars in athletics coming to the Herculis Diamond League meeting. Below are five exceptional athletes who will most likely take the weekend as an opportunity to break some records.

At only 20, the American-born Swedish athlete is the new darling of pole-vaulting. In February 2020, the Louisiana native broke the world record, previously held by Renaud Lavillenie, with a 6,17 m jump. Only a week later in Glasgow, Armand Duplantis had already improved his previous score by reaching 6,18 m. A rising star of athletics who is not to be missed.

After attempting to jump 6,19 m both in Liévin and in Clermont-Ferrand, Duplantis comes to Monaco eager to outperform himself. At last year’s Herculis meeting, he failed to beat Piotr Lisek (6,02 m) by a whisker. He will face him again this year, as well as the American athlete Sam Kendricks.

“We are honoured to welcome for the first time in Monaco the Norwegian Karsten Warholm who will compete in 400 m hurdles, an athlete of immense talent with an extraordinary aura”, said the director of the Herculis meeting, Jean-Pierre Schoebel, in a recent interview with Monaco Tribune. “We hadn’t planned to put this event on the program, but when he called us to let us know that he wanted to come and race here regardless of the conditions, we didn’t hesitate to program the event for him,” added Schoebel. Karsten Warholm should not disappoint!

Undisputed queen of European middle-distance running for now several years, Sifan Hassan left a memorable impression in her last visit to Monaco. European record-breaker in the 1500m and 5000m, the Dutchwoman of Ethiopian origin distinguished herself on the Louis II track by breaking the record in the 1000m (4’12″33) and the 5km (14’44). A spectacular performance which did not leave spectators indifferent. This year, Sifan Hassan will have to work hard to keep up with her performance record: the 3000m steeplechase world champion Béatrice Chepkoech announced she will be taking part in the 5000m.

With a 15.43 m leap, last February Rojas broke the world indoor triple jump record, held up to then by the Russian Tatyana Lebedeva (15.36 m). Enough to put her name down in the discipline’s history books. The 24 year old’s extraordinary talent is bringing triple jump back into the light.

Yulimar Rojas is a four-time triple jump world title holder (twice in outdoor races, twice indoors), making her the second most successful female athlete in the history of the discipline. In Monaco, the Caracas native should not have too much trouble winning the competition. But Rojas’ unwavering drive means that she always exceeds expectations. Monaco could offer her the ideal conditions in which to once again impress the world of athletics. It may well be a record-breaking weekend.

The Ugandan athlete has long joined the pantheon of athletics. After smashing the 5km world record (Monaco, February 2020) by beating Jimmy Gressier with a time of 12.51, Joshua Cheptegei (23) is back in the Principality this Friday evening, hoping to impress once again. Winner of the 10,000 m at the 2019 Doha world championship with a time of 26’48″36, the unstoppable Cheptegei previously held the world record in the discipline (26”38) before being beaten by the Kenyan Rhonex Kipruto (26’24). Even after the season came to a halt because of coronavirus, Cheptegei remains the favourite in the 5000m. In Monaco, he will face once again Jimmy Gressier for a performance which will without a doubt be impressive.

*After getting wounded  in Turku (Finland), Pascal Martinot-Lagarde is not coming to Monaco this year.