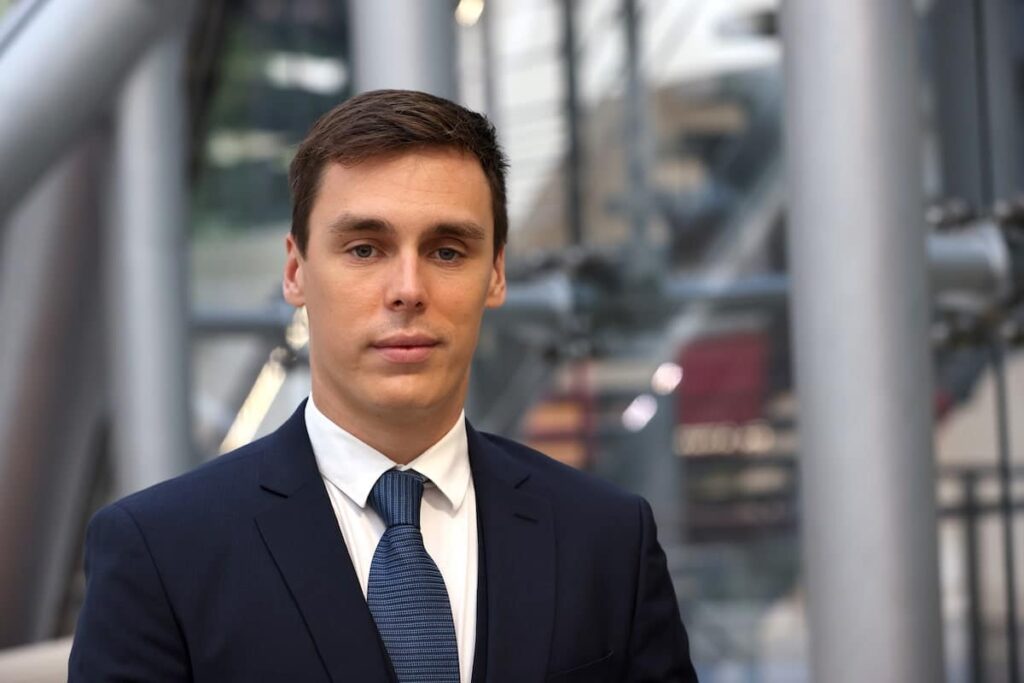 We met with Louis Ducruet right before the French Final of the League of Legends to talk all things esports. He told us about his love for the discipline, generational tensions, and why esports players are worthy Olympic athletes.

This week, Monaco is host to the Sportel Awards,  which on Monday 26 October also welcomed the French Final of the League of Legends tournament, also known as the LFL.

“The LFL did us a great honour by trusting us to organise the event in partnership with the Sportel Awards, even if the Paris Games Week was cancelled,” said an enthusiast Louis Ducruet a few hours before the LFL final. “We are so proud that Monaco can host the event,” he added. The nephew of Prince Albert II has been the president of the Monaco Esports Federation since January 2020.

Why is Monaco’s focus shifting towards esports?

In Monaco, esports is a recent thing. The Federation only exists since 2017. Since I was appointed president in January 2020, we’ve managed to organise some esports events, including during lockdown. We organised little tournaments to distract people from the global situation, as well as the Virtual Monaco Grand Prix, with Charles Leclerc and other professional drivers. We’ve recently joined the International Esports Federation which was one of our main goals when I first joined. By December, we’re also hoping to organise a 100% Monaco Esports Federation event in partnership with Nicecactus.

Esports has been on the rise in the last few years. How do you explain the growth in popularity?

Esports targets a young audience. I come from the generation of the original gamers, who have now finally found a discipline that lets them express their love for the sport. Video games challenge all those who take part, both from a physical and intellectual point of view. Esports are fun, and everyone can get the hang of it. The game offer is varied. There really is something for everyone.

And Coronavirus has been a blessing in disguise…

Lockdown has helped esports grow because the discipline is played online. Esports can be played from the comfort of your home, regardless of where you are in the world. You can take part in worldwide competitions. With streaming platforms, athletes can keep in touch with the community, which is something that fans appreciate. The closer you are to your favourite athlete, the more exciting the experience, and the more enthusiastic you become.

And esports is also a way for drivers to compete against each other….

We know that F1 drivers train in simulators. They now can also do it online. It’s also good to be able to compete against people who are not drivers but who have particular skills. We sometimes notice that professional drivers can’t keep up with some of the gamers. Everyone gets challenged. A great driver on the track doesn’t necessarily make a great virtual driver.

Is it difficult for older generations to get on board with esports?

Obviously, older generations, such as my parents’ generation, don’t really get my enthusiasm for the discipline. But they still try to understand, they acknowledge that we draw a large audience. Some people were amazed to find out that tonight’s event was sold out, that people traveled here just to see the final. The event was on Twitch’s home page. The younger generation goes crazy for it, but it’s true that it isn’t everyone’s cup of tea.

If we look at how European athletes perform, we’ve got nothing to be ashamed of

Can Europe keep up with the US and Asia ?

South Korea is one of the leaders in esports. They also happen to be at the head of the International Esports Federation. The US caught up quickly with Asia. In America, esports events are proper performances, just like an NFL or NBA game. In Europe, we’re still a step behind, but if we look at how European athletes perform, we’ve got nothing to be ashamed of.

Esports is a constant topic of debate. Do you think it truly is a sport of its own, one that would even be worthy of the Olympics?

Esports requires intellectual ability, reflexes, endurance – so yes, for me it is a sport. The players are athletes. Some esports players have better reflexes than Formula 1 drivers. Not everyone is capable of staying focused during long games that can last several hours. I don’t think we can undermine the physical aspect of the discipline.