Women and winemaking: is it still a man’s world? 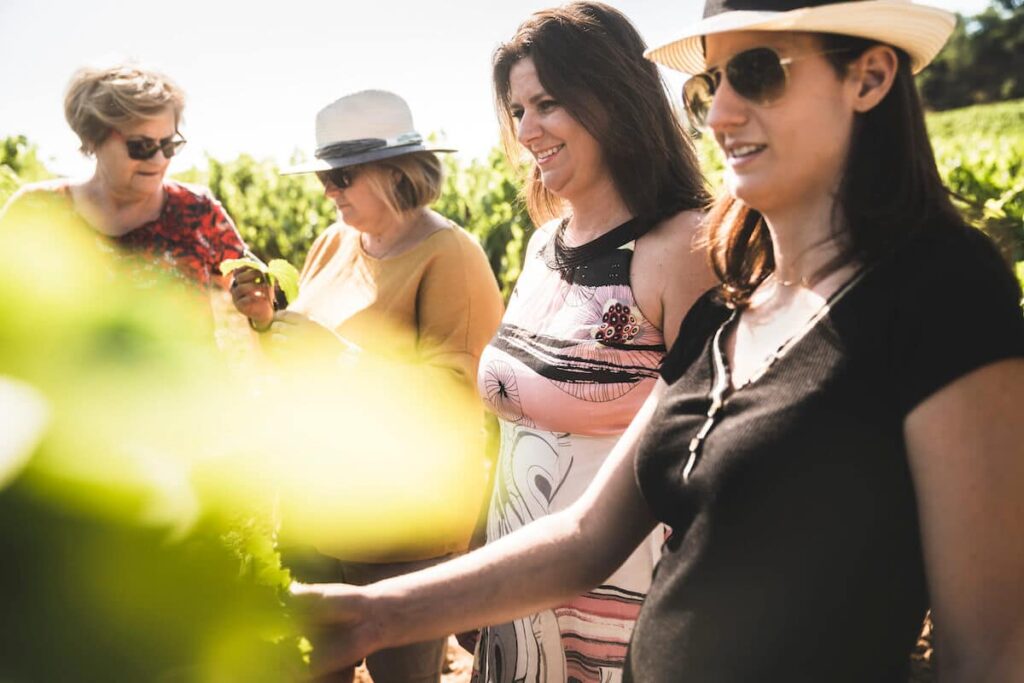 For decades the wine making industry has been a male-dominated place. Forbidden from setting foot into wine cellars and turning their vines into wine, sexist attitudes have left no place for a woman on the vineyards. However, the tide is changing as a new era of winemaking is beginning, in which women are just as valued in the field as men.

Nestled on the green slopes of the Massif des Maures mountain range in southeastern France is the Château Pas du Cerf. Since 1848, eight generations of passionate wine growers from the Var region have tended to these vineyards. Currently in charge of the family business is 68-year-old Geneviève Gualtieri. Along with her three daughters, they take care of 80 hectares worth of vineyards, growing rolle, tibouren and grenache wine grapes: “it’s written in our DNA!”

Making her way in a man’s world

Growing up as an only child, she learnt everything about the industry from her father, a wine grower, and subsequently took over the business in the 90s. “As a child, my father would take me to see the flowering vines, as bunches of grapes were about to form. Every day he would teach me about his job,” reminisces the former horticulturalist, who, at the age of 20, decided to pursue a degree in Oenology. “At no point did I ever think I wanted to do something else,” affirms the winegrower. “We’ve always had so much respect for what our ancestors have created.”

Aged 38, Geneviève Gualtieri became the first female President of the winemaking cooperative “la Londe”, which her vineyards relied upon. “A relatively rare position for a woman to hold, particularly in the Var region,” notes this determined wine producer. “In 1990, sexism was still a big problem: some members of the cooperative, of a certain age, frowned upon a young woman taking on this role, and some of their chauvinistic comments often got back to me.” Respected for her incredible work, she was re-elected to the same position every year for a decade. However, in 2000, she decided to leave the cooperative to set up her own private wine cellars, alongside her eldest daughter, a trained saleswoman, and her youngest, who makes wine from their produce.

Up until the 1970s, women were not allowed to step foot inside wine cellars

Winemaking women finally get the recognition they deserve

Myths and prejudices have long since held women back, often limiting their roles in the industry to simply selling the finished products. “Up until the 1970s, women were not allowed to step foot inside the wine cellars because people thought that whilst women menstruated, they would ruin the wine and reduce its quality,” explains Florent Schepens, a sociologist specialising in the industry. “Today, in some vineyards in Switzerland and Jura, female grape pickers are still refused access to wine cellars.” However, according to this researcher, these prejudices are slowly disappearing, thanks to female wine growers becoming more visible in the industry. “Women’s names are appearing more and more on wine labels…on bottles of wine made by couples, both of their names are now equally visible.”

“Wine-growing is still a male-dominated industry,” laments Charles Rigaux, a researcher in the sociology of wine tourism, who welcomes the recent emergence of organisations and competitions for female winemakers. “Even though more and more women have carved a path for themselves in this industry in the 20th century, and are viewed as genuine winemakers, the way vineyards are passed down through families still works in men’s favour. When the time comes for a winegrower to pass on their business to their children, they will often choose their son over their daughter.”

A family of female heirs

“In our business, women have actually been the main heirs…due to the way circumstances have played out,” details Geneviève Gualtier, as she explains how some generations in her family never had sons to inherit the land. “My great grandmother was an only child when she inherited Château Pas du Cerf, and she gave birth to two girls!” For this family, history seems to keep repeating itself, much to the delight of this passionate wine expert and her daughters.

Winemaking is..a profession which has wrongly been considered as a man’s job for a long time

“Nowadays many women own vineyards and they themselves produce the wine, which even in the 90s was rather unheard of,” notes Geneviève Gualtieri. “Producing wine is physically demanding, having to pull heavy pipes or descale them in the cellars has meant this is a profession which has wrongly been considered as a man’s job for a long time, all because you need a certain level of fitness.”

A need for recognition

Geneviève Gualtieri is delighted to receive numerous applications from women, as she looks for new staff to help out on her vineyards. Her youngest daughter, in charge of the wine cellar at Château Pas du Cerf, has just hired a female wine merchant. “It reassures me to see my children making their way at a time when female and male representation in the industry is much more balanced,” explains a relieved Geneviève Gualtieri, going on to tell how “they in no way feel discredited by their male colleagues.” She finds it a shame though that women still have to prove themselves to be just as talented and worthy as their male counterparts, which is  a challenge something women face in a variety of industries. “It’s annoying,” but she does reason that “as soon as a woman proves herself to be capable, she is nevertheless respected by the wine-growing community.”