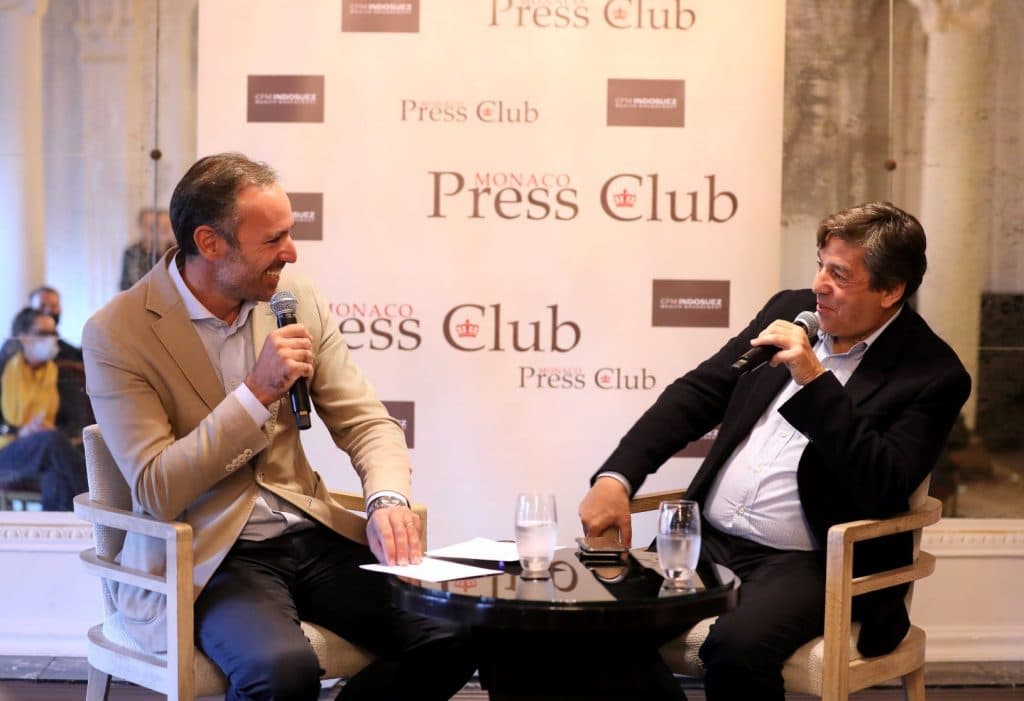 The conference was held at the Hôtel Hermitage, and hosted by Yann-Antony Noghès and François Tron.

“Monaco: what does the future hold in television?”  This is the question that the Monaco Press Club attempted to answer on Tuesday evening, during a conference led by journalists Yann-Antony Noghès and François Tron.  The two leading professionals of the French-speaking audio-visual industry broached the subject of the future Monte-Carlo Riviera television channel and its international broadcasting prospects.

1. Monaco can attract an international audience

Already an integral part of TV5Monde, but yet to be launched, the new Monte-Carlo Riviera channel is intended to become Monaco’s future national public television service.  For what audience?  Local?  Regional? National, or even international?  In François Tron’s opinion, anything is possible, it all depends on the Principality’s ambitions.  “There is a public service ‘mission’ that is carried out [by Monaco Info], providing local and regional news to a target audience that is interested in this kind of information.  But there is also a particular aspect: how Monaco is viewed, and that view is an international one. (…) This is an aspect that can be built on, to give national or even international exposure to the life of the Principality,” the journalist pointed out.

Comments echoed by Selim Zeghdar, manager of the Monte-Carlo Riviera: “When we are in Monaco, we think that nobody is interested in us, but when we travel, we realise that people look at us differently.  We are fortunate to have a Princely Family and a Prince who convey a positive image of the Principality everywhere.  If we take the example of China, Monaco is rather well regarded over there, and they also appreciate decorum. »

2. Show Monaco minus the clichés

Another question was raised by Yann-Antony Noghès: what kind of programming would a channel like this have?  News, “obviously”, according to François Tron.  He also mentioned sport and the local news magazine.  But in the journalist’s view, staying on set all day is not necessarily the best solution, even if it’s an option that can help keep costs down.  For local information, the journalist recommends reporting: “I was struck by the number of cultural events here.  What with the theatre, the opera … there’s practically one a day!  There’s plenty of subject material on culture, we just need to sign an agreement for the rights and the footage… »

As for programming for an international audience, Yann-Antony Noghès is in two minds: should we focus on the “clichés” and keep up Monaco’s image abroad or should we concentrate on what the Principality “wants to talk about”, such as energy transition or the economic sector?  According to François Tron, it’s up to the channel and Monaco to highlight what the Principality has to offer “apart from Ferraris and big boats. »

Among the editorial themes that are less well known internationally, Selim Zeghdar would like to incorporate the environment into the channel’s content: “Today, everyone is talking about the environment but there is no legitimate international channel on the subject.  And we believe that the Prince’s work, which is very positive at international level, will help us to be an environmental channel with a certain number of partnerships, such as the Discovery Channel or foundations like Di Caprio’s or the Albert II Foundation.”

Finally there is the question of the budget required for creating this channel.  While the average minimum cost is usually estimated between 40 and 50 million euros, Selim Zeghdar wants to be reassuring: “We will start off gradually, with the means at our disposal”.  Those means could evolve rapidly thanks to structured advertising and to the environmental theme which, according to Selim Zeghdar, is of interest to an international audience.