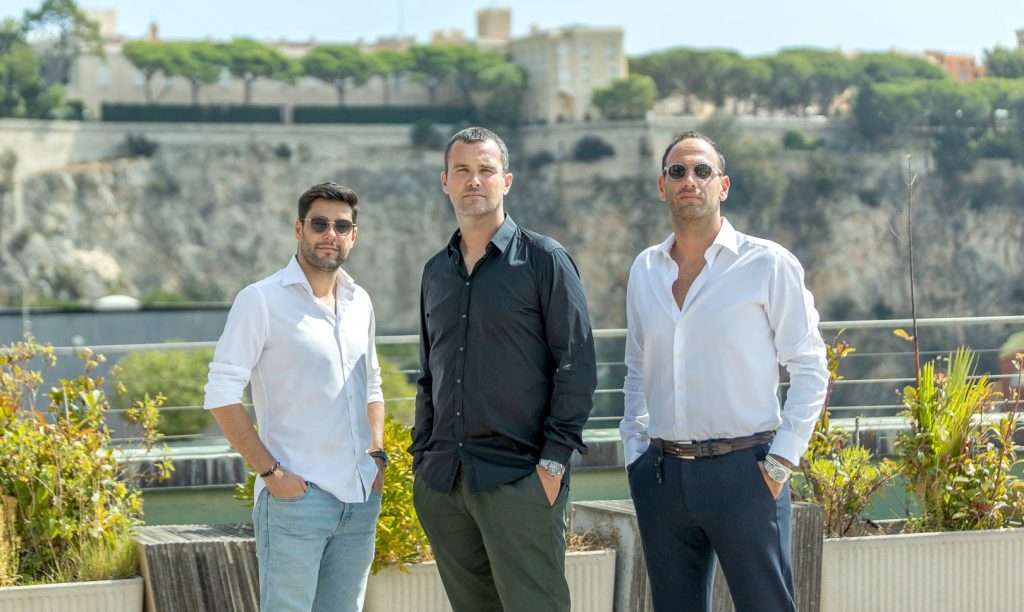 Almost three years after opening, The Office has established itself as the benchmark for Business Centres in Monaco. Founded by Benoit Biancheri, Olivier Blanchy and Arnaud Sbarrato, The Office stands out with its trendy style and good atmosphere. A modern co-working space that these three friends created in their image. We profile the trio of entrepreneurs for the second part of our new series devoted to local entrepreneurs in the Principality.

The story of Benoit Biancheri (42 years old), Olivier Blanchy (36) and Arnaud Sbarrato (34) is first and foremost one of three friends who have shared a common project for almost three years now: The Office. A project they had been nurturing for a long time in their minds, and which came to fruition in January 2019. “Arnaud said he wanted to go into business with me, Benoit had often told me that if he was going to do a project it would be with me, so the three of us got round the table and said ‘let’s do this’.” Olivier smiles, before handing over to Arnaud.

“In life, there is no such thing as coincidence. Benoit and I used to hang around together at AS Monaco and at US Cap d’Ail (because football is the shared passion that unites the three friends, providing material for their lunch break discussions). He was a coach and I was a player. And then Olivier and I had the same student jobs all the time. I was a valet at the Sporting Club, so was he. We kept meeting up. »

Because while Benoit Biancheri is a little older and founded his company as a players’ agent after a doctorate in law, Olivier Blanchy and Arnaud Sbarrato both had a similar career path. After two years of real estate agent experience in Bastia (Corsica), Olivier joined the Prince’s Government, in the Business Creation department, where he once again met up with Arnaud, who became a member of the Prince’s Government Administration on his return from Toronto, Canada.

Along with Benoit, Olivier and Arnaud set out to find premises to bring their project to life: to create a Business Centre in tune with current trends. “When we visited these premises, in Fontvieille, we didn’t hesitate for a single second.” What was to become ‘The Office’ has it all. The location, first of all, and the space.

The aim is really to have all of our members become part of the same community.

“We started with a blank page,” says Benoit. All the better to let their imaginations run free. “We wanted a modern office, where everyone would feel comfortable,” says Benoit. “A place where synergies emerge, even between entrepreneurs who are not at all in the same field”, Arnaud adds. “We don’t just want to provide a business address”, Olivier tells us. “The aim is really to have all of our members become part of the same community.”

The Office is about to inaugurate new 1200m2 premises.

Today, The Office has been so successful that only one year after a first extension in the building next door (opposite the JouéClub), another one is about to appear. “We are going to open a new 1200m2 space on the top floor,” says Olivier. “Despite the crisis, there are still a lot of new companies being created,” Arnaud adds. “Monaco is a bustling place and demand is strong.”

With its own communications agency (theoffice.comm), the company founded by Benoit, Olivier and Arnaud can meet all of its clients’ needs. “We have a global offering” Olivier explains. “Here, people can focus purely on their business. We take care of everything else.” The Monegasque trio is complementary and always in a good mood, in or out of The Office.

“Olivier and Benoit now have family lives, but we still manage to go out together.” Whether they’re wearing the Monaco national selection’s colours, in the Gaston-Médecin stadium to encourage the Roca Team in the Euroleague, in the stands of the Louis II to support AS Monaco or having dinner, Olivier, Benoit and Arnaud take every opportunity to see each other. Who said  you couldn’t mix friendship and business anyway?

>> SEE ALSO: Romain Goiran, a man mastering the art of bouncing back