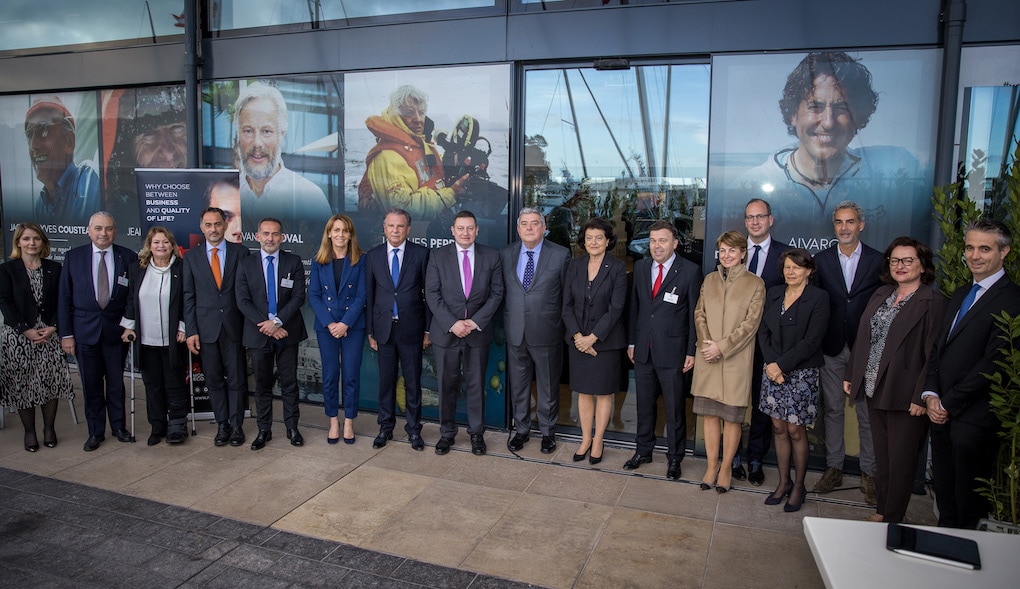 Guillaume Rose, CEO of the Monaco Economic Board since 2019, spoke about the MEB’s past and future missions, and the changes made in the wake of the different international crises.

What missions did the MEB carry out last year?

We carried out missions in Dubai in particular, for the Universal Exhibition. And a large mission went to Florence in July 2021.

Before that, things were unsure [because of Covid], so we did a lot of remote work. In September 2021, a very large delegation went to Antwerp with a Monegasque company, Monaco Ressources Group. And then, from November, we carried out several economic operations to assess the potential of the United Arab Emirates, to be able to support the mission that took place in January 2022 in Dubai.

And what missions will be carried out this year?

We started 2022 with Dubai, we continued with several webinars concerning African countries. We have already looked at the Ivory Coast, Tunisia and Madagascar. Each time we discuss the opportunities available in the different countries. We have contacts with governments, through ambassadors, and with the Chambers of Commerce. Then, through these Chambers of Commerce, Monaco companies develop their contacts with African entrepreneurs in the countries concerned.

SEE ALSO: Monaco Economic Board on a mission… to Dubai

Other exciting missions are planned in the rest of the world. The first, and the largest, will be focused on Canada, and more specifically Toronto and Montreal. We will continue the year in Madrid in October, and finish in Paris, in December, with the Monte-Carlo Opera. We may also accompany the Opera to London.

What are your criteria for choosing the destinations?

The markets. If we take the example of the Antwerp mission: certain Monegasque companies that are members of the MEB, are well established in Belgium.

Starting from there, we contact the Belgian Chamber of Commerce and we try to set up a trade mission involving these companies. The mission is primarily intended for themselves, bringing them together with their usual customers but in a more institutional context, with the support of the Principality of Monaco. Secondly, the mission is intended for other businesses so that they can meet with companies in the host country and start developing markets.

The second objective is for these Monaco-based companies to be able to export their know-how to countries, particularly by establishing partnerships with other companies around the world. We were talking about Antwerp, for example: we managed to take about a dozen logistics, shipping and trading companies to Antwerp to meet with regular customers and prospects in order to develop them.

The third mission is to be part of the Principality of Monaco’s soft power, coordinating all the major sporting, cultural (the Monte-Carlo Opera, the Ballets, the Monte-Carlo Orchestra, or even the Petits Chanteurs) and scientific events. For example, if the Monaco Scientific Centre or the Prince Albert II Foundation decides to go somewhere, we can add an economic component.

If there is an anniversary of diplomatic relations between a country and Monaco, we come with an economic programme, which we draw up with the local Chamber of Commerce. We can therefore add an economic component, which we provide via the Principality’s companies, to the diplomatic, sports, cultural and scientific aspects.

The MEB had its AGM on 11 April, could you give us the highlights?

During the AGM, we presented our 2021 results, our budgets and our activities, of which there were many. We also presented our plans for 2022.

Following this, we organised a members’ meet-up: we invited the 556 member companies in the MEB (making 1,200 people in total). All of the companies can meet, talk, network, exchange ideas. We had to cut back on these kinds of events during the pandemic.

On that subject, how did you manage to support businesses during the COVID-19 crisis?

As soon as we saw the problem coming, we very quickly decided to turn to digital, working closely with the Digital Transition delegation. The lockdown began on March 15, 2020 and by May 1, we had already created the “MEBinaires”, which meant we could communicate with people, with unprecedented frequency. And we are still doing them today, in fact. We also conducted “e-missions”, for example with India in 2021: we brought together Indian and Monegasque companies and enabled them to communicate in the form of virtual speed-dating.

SEE ALSO: Monaco Economic Board: “Our institutions are proving to be exceptionally responsive”

Generally speaking, we absolutely couldn’t carry on as before. It was impossible to arrange appointments, to put people in touch with each other. So we started using Zoom, we are now Grand Master Zoom users, and we carried on in that vein.

After the Covid crisis, another crisis has come to the fore. Have you felt the impact of the Ukraine War?

Actually in 2021, we made two reconnaissance missions to Saint Petersburg in preparation for a major mission scheduled for June 2022, involving all the companies in north-western Russia. We were in the middle of preparing all of that when war broke out.

We immediately changed our minds, as we could not condone the Russian attacks. We therefore decided to look to other markets, such as Canada. This is also one of the reasons why we are greatly increasing our presence in Africa, especially thanks to webinars and CEMA: le Club des Entrepreneurs Monégasques en Afrique (Monaco Entrepreneurs in Africa Club). Globally, we have decided to focus on Africa, Europe and the West, in other words the Americas.

What have the consequences been for Monegasque companies based in Russia?

There are a few Monegasque companies operating in Russia, most of which specialise in the oil industry. One of them had to lay off 1,500 employees from its Russian subsidiary and the company was forced to close the subsidiary, with a huge shortfall. Unfortunately, this is part of life’s ups and downs. The only thing we can do, and which we are doing, is to try to find alternatives, such as these opportunities in Africa, Europe or the United States.

On the other hand, Ukraine is still very active during the conflict. We have made very, very promising initial contacts with the Ukrainian Chamber of Commerce, some of whose members have gone into exile on the Riviera, and are trying to contact us in a very interesting way. The Principality of Monaco may be in a very good position to respond to the Ukrainian crisis.

Back to Dubai, and the Universal Exhibition. Was the exhibition an opportunity for the MEB to develop stronger ties with Dubai?

Absolutely: we did not only meet companies, but also institutions, particularly DMCC, which is a huge conglomerate of free zones in Dubai, with a lot of companies. We have developed some very interesting contacts with DMCC, and we also have contacts with Sharjah’s Chamber of Commerce and a Monegasque company has already opened a subsidiary in Sharjah, thanks to our trip. So we were able to move things forward.