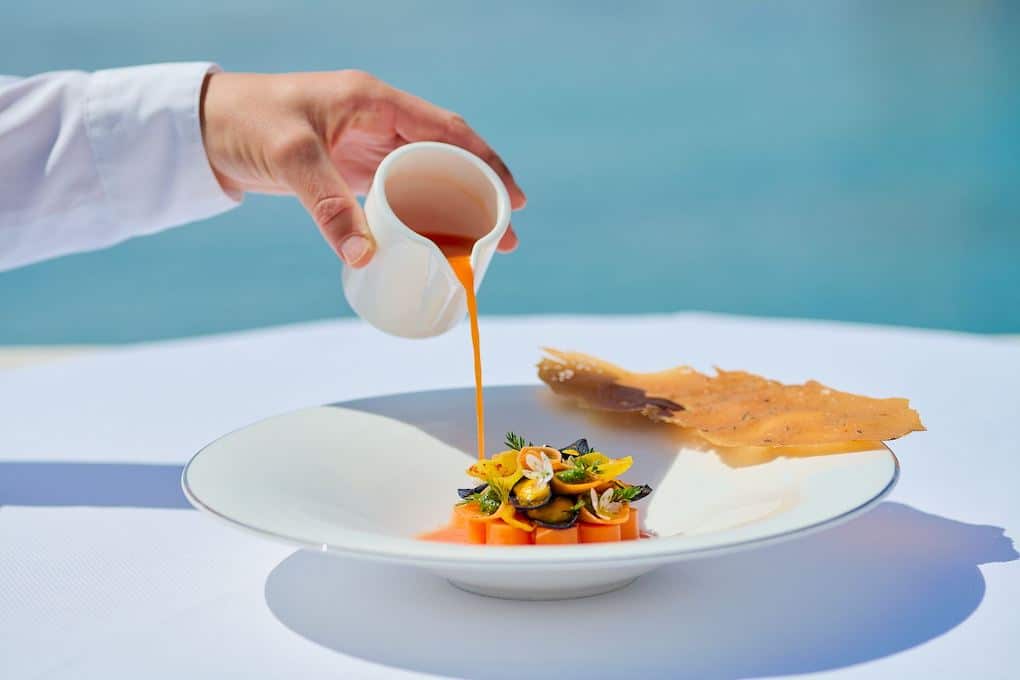 Chef Mélanie Serre has taken over the reins of this beautiful establishment, run by the Société des Bains de Mer.

Take fresh, organic, local and seasonal produce, add a pinch of creativity, sprinkle with a breathtaking view of the sea, and you have the recipe for Elsa, the Monte-Carlo Beach restaurant, whose kitchen is now expertly managed by chef Mélanie Serre.

However, the young woman was not originally destined for a career in the kitchen, even if cooking was never far away: “After a scientific baccalaureate, I went on to study for a degree in hotel and restaurant management, because during my adolescence I worked for my uncle, who was a catering chef. Every Saturday, I would be doing weddings while my friends were out partying. I loved that wedding mood, where people were happy and everything went well.”

“After graduating from high school, I thought I wanted to go in that direction, but I didn’t want to do the cooking: I wanted to go into management. I even remember that I said for the school entrance interview: ‘One day, I will have a hotel on each continent.’ “

Several internships with renowned caterers later, Mélanie Serre’s project has changed but her ambition remains intact. When she first arrived in Monaco in 2011, she joined the staff at Joël Robuchon and Christophe Cussac’s Métropole. At the request of Joël Robuchon, she took care of his Atelier in Paris four years later, before opening her own restaurant in the capital, which she still manages today with her partner.

So now she has a whole new challenge: taking care of two establishments, one in Paris, the other in Roquebrune-Cap-Martin. Once the excitement died down, we needed to get organised. And, above all, commit fully to organic food, her trademark. “It’s a real challenge: you are dependent on nature, on the seasons, on what you’re going to be given. It’s hard when you have a restaurant, with a set menu. For example, today, I have rhubarb for dessert, but maybe next week there will be no more rhubarb.

“You have to be able to adapt, to change quite quickly, sometimes. It’s even trickier for organic than for seasonal products. Plus, there isn’t an organic version for certain products, such as saté, an Asian spice. I absolutely wanted to make a saté sabayon to go with asparagus, but organic saté doesn’t exist, so I had to learn how to make saté. I also learned how to make ‘brick’ pastry!”

Along with the organic approach, Mélanie Serre’s aim is to provide a menu that is based on healthy foods, without being bland.

“You always need to seek out the best product from the best supplier. I need to have a feeling with the person I’m going to work with, to see how they work, to bring out the best in the product. But the most important thing is cuisine that has taste, with chilli, pepper… A spicy cuisine, with character.”

And it would be an understatement to say that the gamble has paid off! With light and healthy dishes, and lots of flavour! We particularly recommend the carrot with cumin, carrot top pesto and chilled orange and ginger jus, which appeals as much because its presentation as because of its incomparable flavours!

The desserts add a touch of lightness and freshness, especially welcome in summer. What’s more the magnificent sunny terrace, offering a beautiful view of the Mediterranean, gives the impression of already being on holiday.

An absolute must-try before October 2, 2022, when the season ends.