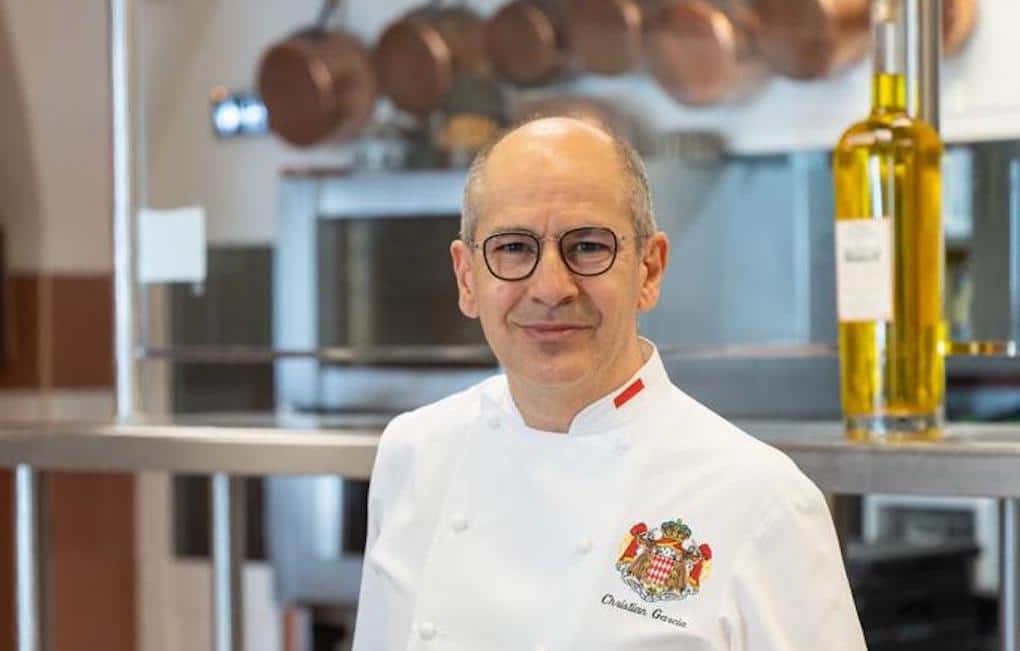 Recently appointed Officier de l’Ordre du Mérite Agricole, the chef has been working in the Prince’s Palace kitchens since 1987. We met up with him.

A wide smile and laughing eyes… When Christian Garcia talks about his profession and his many extraordinary experiences, he says how fortunate he feels to have had such an exceptional life. And with good reason: he has been working in the kitchens at the Prince’s Palace for 35 years , preparing the daily meals for the Prince and his Family.

The son of restaurateurs, managers of a brasserie in Monaco, he always knew that he was destined for a career in the restaurant business, and it seemed only right that he should train at the prestigious lycée hôtelier (catering college) in Monaco. “I feel like I’ve come full circle! I am a French national, but I’m Monegasque at heart. (…) When we need extras for receptions, I always insist on taking the young people from the catering college, because it is a wonderful experience for them. We have a duty of transmission, we must pass on our knowledge, and the Prince never fails to come and greet them in the kitchen,” he confides.

After having worked at the Monte-Carlo Beach, the Hotel Hermitage and then the Hotel de Paris, Christian Garcia was approached to work in the Palace kitchens in 1987: “They came looking for me.  The Prince’s Palace offered me a seven-month replacement position.”

At the time, the young chef was only 23 years old: “I thought it would be a great experience, I really couldn’t refuse and I was excited about it. In the end the temporary position became permanent.”

SEE ALSO: Riccardo Giraudi: “I want to keep this creative spirit in everything I undertake”

Christian Garcia remembers his meeting with Prince Rainier III on his first day in great detail: “When you are 23 years old, and you find yourself in the presence of Prince Rainier III, it is quite something. I was emotional, nervous, but he reassured me pretty quickly. Serving Prince Rainier for 17 years was a very good school. I will never forget his presence, his confidence, his calm and composed way of speaking to you, but firm at the same time.”

This was neither his first nor last high-profile encounter. Throughout his career, the chef crossed paths with many political figures, such as Nelson Mandela, Barack Obama, Angela Merkel or even Queen Elizabeth II.

Years later, Christian Garcia still remembers how he felt: “At the end of the meal with Nelson Mandela, Prince Albert invited me to greet him. He simply thanked me, but I was very moved to meet the great man, it was an honour. (…) Meeting Queen Elizabeth was a pretty magical and unbelievable moment, at Buckingham Palace. I will never forget those blue eyes, the Queen’s piercing gaze… We talked about gastronomy for an hour! (…) And when we were invited to the White House, by President Barack Obama… When you’re waiting in the sitting room and you hear that voice… He was impressive but he put us at ease and talked about the role of gastronomy in diplomacy.”

Encounters that took place at Princely Receptions but also and especially at the annual meetings of the ‘Chefs to Heads of State’ club, of which Christian Garcia has been president since 2007, and whose motto is: “Politics divide men, a good table brings them together.”

But apart from all these incredible encounters, Christian Garcia is very happy to serve the Princely Family. As the father of twins himself – a girl and a boy – a real complicity has developed between himself and Prince Albert II, Princess Charlene, Crown Prince Jacques and Princess Gabriella. And he is happy to seek out new flavours or recipes for the Princely Family to discover:

“It’s a different way of working than traditional catering. We serve the same guests every day, at the table. (…) I am often inspired by cuisines from around the world, which I have the opportunity to discover during my many trips. We have a duty to interest, to surprise. We need inspiration and creativity.”

Helping those in need

But you don’t have to travel far to please the Palace palate! While Christian Garcia defines the Prince as ‘a lover of fine food’, the Sovereign apparently particularly appreciates Mediterranean cuisine made with local products: “We use good products from here, local vegetables… The Prince has a vegetable garden above Monaco, and we get seasonal vegetables from it. These are sun-kissed vegetables, without chemical fertilisers…  We are lucky to have products that have just been picked, where just seasoning and cooking are enough.”

And what about the Princely Twins? “They are children with children’s tastes. They want to eat the same things as the other children. They are children first and foremost, but we always try to vary what we cook and have them discover different products. We are educating their palates,” the chef explains.

Educating palates, but also supporting farmers. Christian Garcia was recently appointed Officer of the Order of Agricultural Merit in recognition of his actions, particularly in the Landes, to support duck producers who were coping with bird flu. “I was particularly flattered… I think it’s a reward for several actions I’ve carried out with the Chef’s Club, and always with Prince Albert’s support,” he says.

Christian Garcia can always count on that support from the Prince, especially in his second mission: helping the underprivileged. After having taken part in a large number of charity meals around the world, and in particular in Japan, after a tsunami, Christian Garcia sees his future in outreach work, when the time comes to leave the Prince’s Palace: “I will try to bring my notoriety to the charitable sector, to do good, even if I already do a lot.”

Until then, Christian Garcia intends to enjoy every minute spent with the Sovereign and his Family: “I am lucky to work in a magnificent Palace, in the most beautiful country in the world, for a fantastic Family. I am very grateful to the Prince and the Princely Family for enabling me to live an extraordinary and unique life.”