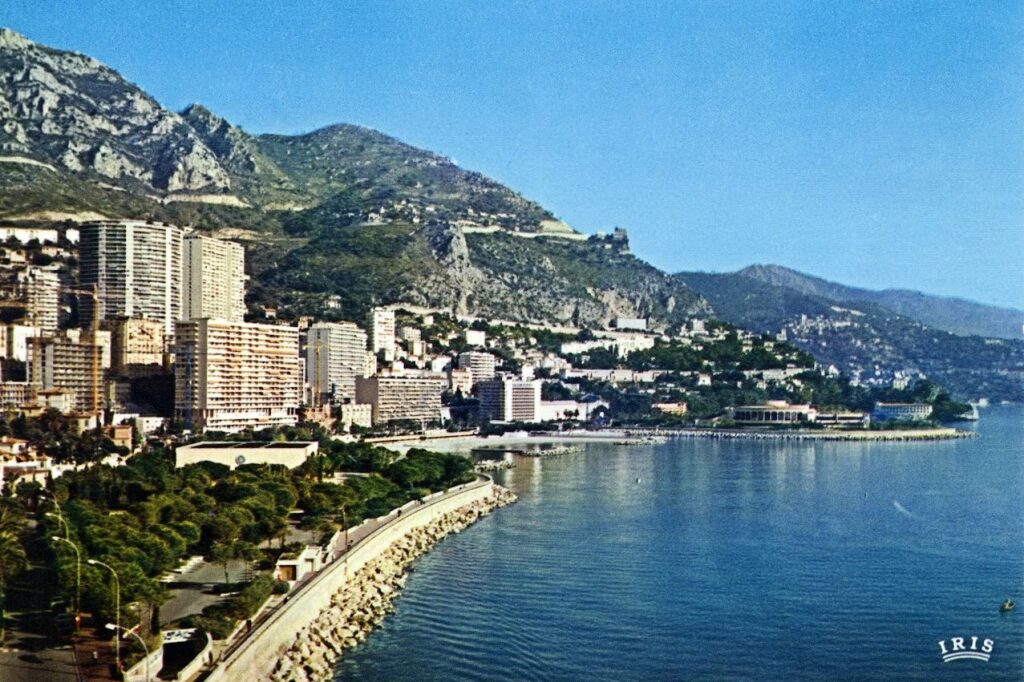 Retrace the history of your favourite neighbourhoods, in pictures. Today we look at the iconic Grimaldi Forum.

Originally, there was only the sea and a small rock formation where the Grimaldi Forum now stands.

In the 1950s, as more and more tourists converged on the Larvotto beach, amenities gradually began to emerge. An idea started to take shape in the mind of the Builder Prince, Rainier III: developing the Larvotto to make it a full-blown seaside resort.

And so, the Larvotto neighbourhood was completely transformed between 1958 and 1963. Massive extensions out to sea were added to the beach to create the Larvotto seaside resort as we know it today. The first earthworks emerged from the sea in 1961. Located in Le Portier and with an area of 35,000 m², this extension housed the Hall du Centenaire (Centennial Hall) in 1966 and later the Grimaldi Forum.

Completed in 1966, the Hall celebrated the 100th anniversary of the inauguration of the Casino, its square, the Hôtel de Paris and the new Monte-Carlo neighbourhood. It would serve as an exhibition hall for events in the Principality until 1992. After that, the ambitious project of the Grimaldi Forum was launched and construction was carried out throughout the end of the 20th century.

SEE ALSO: A picture postcard: the Casino and its square

The demolition of the Centennial Hall paved the way for the first foundations of the Grimaldi Forum. From 1992 onwards and for eight years, a colossal construction project shook the Larvotto up. At the same time, in 1994, the Japanese Garden was created to embellish the vicinity of the Principality’s future cultural centre.

The Grimaldi Forum was inaugurated in the year 2000. The building has a surface area of 70,000 m². A mixture of steel and glass, it has become iconic in the Principality thanks to its unusual outline.

The giant structure contains a theatre, three auditoriums with 1,800, 800 and 400 seats respectively, 22 conference rooms and seven eating areas. In all, 35,000 m² worth of modular space is available, to cater for the exhibitions and events that take place in this majestic Congress and Cultural Centre. In 2019, nearly 300,000 visitors walked through the doors of the Grimaldi Forum and the venue was unoccupied for only 10 days. Proof of its international appeal.

Today, the roof of the Grimaldi Forum is covered with 1500 solar panels. It is the biggest photovoltaic power station in the Principality. The electricity it produces satisfies the centre’s needs, the output being the equivalent of the annual consumption of 170 Monegasque homes.

In 2025, to celebrate its quarter-century, the Grimaldi Forum intends to expand to the south, preparing to join the new sea extension, Mareterra. The total surface area of the Grimaldi Forum should therefore increase from the current 70,000 m² to 80,000 m² and the modular surface area should also increase to 41,000 m². Three new eating areas will also be added to the existing seven.

Monaco went through many changes over the 20th century, as witnessed by the Grimaldi Forum The rest of the town was not overlooked, and if you want to find out more, a group of enthusiasts, administered by Jean-Paul Bascoul, has come together on Facebook to share their old photos of the Principality: Monaco4Ever.